You are here: Home / Warcraft / Activision Blizzard to Raise Pay and Holiday Time Off For Temporary Employees 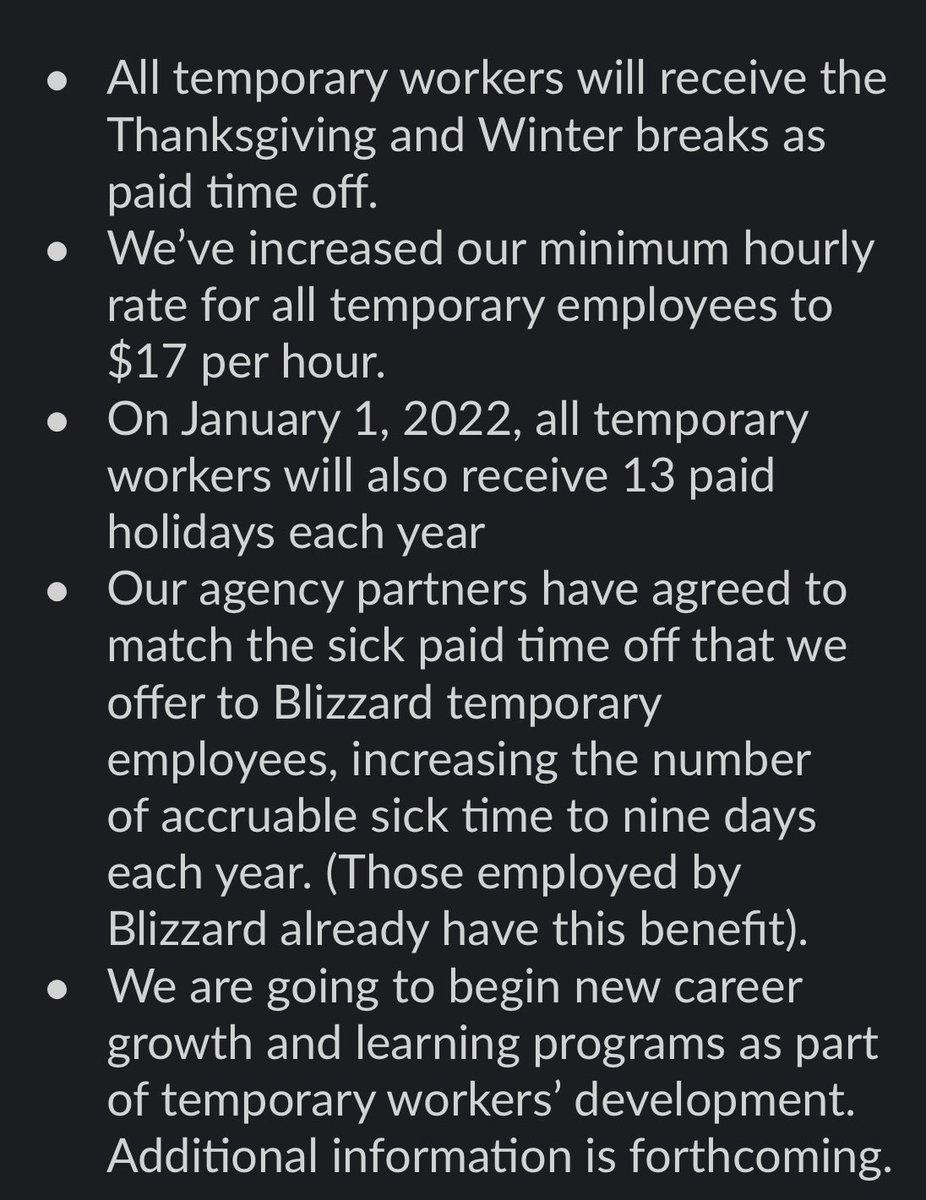 Activision Blizzard, Inc. has announced that it will be raising pay and holiday time off for temporary employees working at the company. The company is also planning to add a new holiday, “Blizzard Day,” which will be celebrated on November 30th. Read more in detail here: blizzard activision.

With their merger, Activision Blizzard is the biggest employer in the country. Employees want a better work-life balance and more pay. The company has responded with an increase in wages for temporary workers at both of its major games, World of Warcraft and Overwatch. This move will affect how other companies choose to hire on employees going forward as well

Increased salaries and more paid time off for contract workers were reported in what seem to be internal emails exchanged by employees, indicating that Activision Blizzard is taking further efforts to boost remuneration among temporary contract employees. While an official comment from Activision Blizzard has yet to be released, the news has been welcomed by multiple workers on Twitter, first by KittyKatQA and then by BlizzJess, both of whom have been vocal critics of Activision Blizzard and strong advocates of the #ABetterABK campaign.

These temporary employees, known as “contract workers,” are typically full-time employees in everything except name and perks, working the same hours and duties as their counterparts to their left and right, but via an intermediate corporation. While some people are employed to help build a staff for a new expansion or before a large launch, they are sometimes kept on for months or even years with the expectation that they would ultimately be promoted to full-time status, which seldom occurs. As a result, these mostly Customer Service and Quality Assurance workers end up doing the same job as their full-time counterparts, but for less pay, fewer benefits, and limited opportunities for advancement – and while this isn’t unique to Activision Blizzard, it’s another ugly reality that employees in the video game and tech industries must deal with, which has already been the subject of numerous editorials and has only gotten more attention after the Californication scandal.

The ABetterABK movement started with an open letter from workers denouncing Activision Blizzard’s reaction to a discrimination complaint filed against the firm in California, followed by a walk-out demonstration in front of Blizzard Entertainment’s Irvine offices. Employees submitted four requests in addition to the walkout.

We believe that our values as employees are not being accurately reflected in the words and actions of our leadership, based on last week’s statements from Activision Blizzard, Inc. and their legal counsel regarding the DFEH lawsuit, as well as the subsequent internal statement from Frances Townsend and the many stories shared by current and former Activision Blizzard employees since.

As current Activision Blizzard employees, we are staging a walkout to urge the company’s executive leadership to collaborate with us on the following demands, in order to improve working conditions for the company’s employees, particularly women, especially women of color and transgender women, nonbinary people, and other marginalized groups.

We’ve seen Activision Blizzard take a number of steps to address these and other concerns over the last several months as a result of employee pressure and public criticism, resulting in the firing and discipline of dozens of employees for misconduct, with the promise that more changes were on the way. CEO Bobby Kotick issued five promises by the corporation in a public statement last month, several of which meet at least partly the employee requests stated above, as well as his personal vow to decrease his total income to the city of Santa Monica salaried minimum of $62,500.

Although the temporary and full-time workers of Activision Blizzard, Ubisoft, and all other sectors pushing for fairer wages and anti-discrimination regulations still have a long way to go, it’s encouraging to see some little victories in the aftermath of greater injustices.