You are here: Home / Warcraft / Author and Blizzard Senior Writer Christie Golden on the Allure of Lore and Upcoming Sylvanas Novel 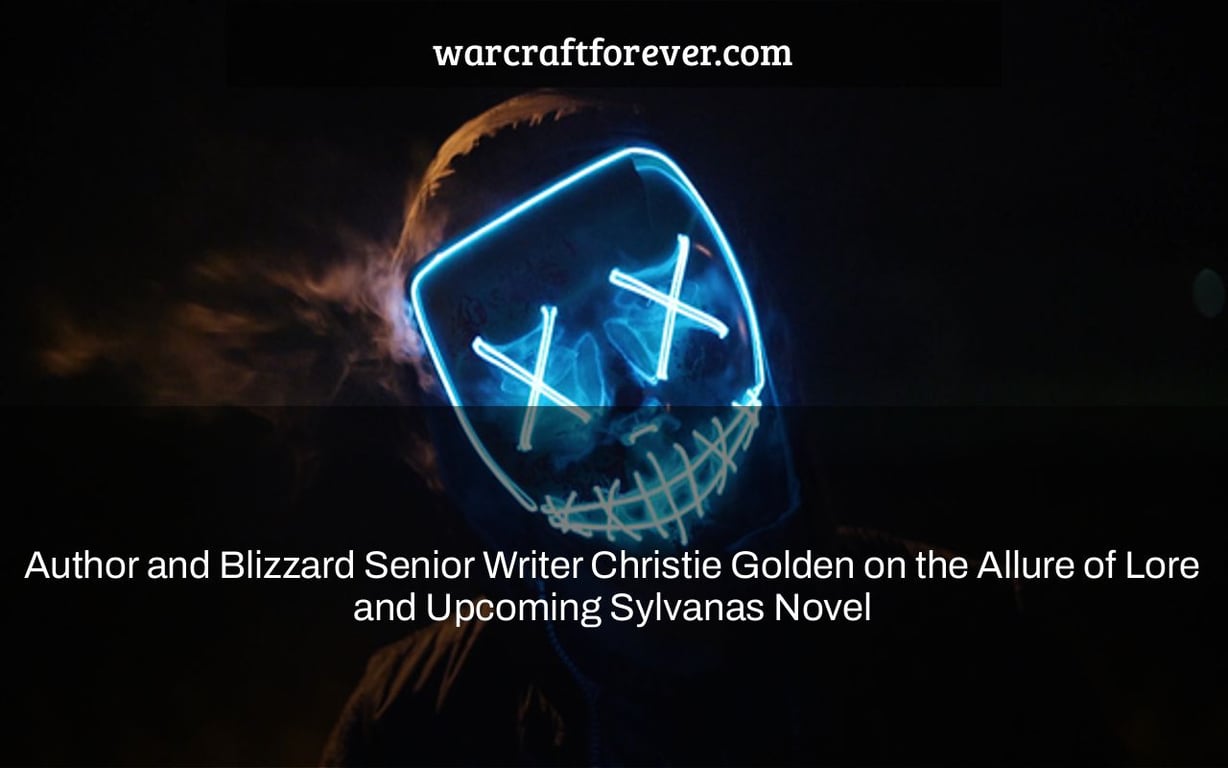 Christie Golden has been both a pivotal author and contributor to the lore of World of Warcraft for over 15 years. We chatted with her about writing stories for in-game characters, how she approaches world building, and what it’s like sitting at Blizzard HQ when “The Burning Crusade” expansion is announced.

Christie Golden is a senior writer for Blizzard Entertainment. She has written several novels in the Warcraft universe, including “Lord of the Clans”, which was released by HarperCollins in November 2018. In an interview with The Escapist, she discussed how she became interested in writing about lore and what her upcoming novel about Sylvanas will be like.

The author of more than a dozen World of Warcraft books talks about her creative process, the shifting gaming scene, and her new novel about Sylvanas Windrunner.

Sylvanas Windrunner is known by a variety of titles, including “The Banshee Queen,” “The Dark Lady,” “Ranger-General,” and “Queen of the Forsaken,” none of which suggest a happy existence. She’s a battle-hardened character who doesn’t see death as a way out of misery and ruin.

Christie Golden was not pleased with any of it.

Where Sylvanas’ lore is dark and sad, Golden’s own is one of infectious enthusiasm for what she does. As the author of over a dozen World of Warcraft novels (and nearly 60 bestselling books across iconic IPs including Star Wars, Star Trek, and Dungeons & Dragons), Golden has been breathing life into Azeroth and beyond since the game’s earliest days over 20 years ago. And for the past five years, she’s been embedded within Blizzard working to further deepen and expand the lore as a full time Senior Writer. When it comes to all things World of Warcraft, Golden feels “so lucky to have been able to leave a fingerprint or two on so many different aspects of the game.”

Christie Golden, author and senior writer at Blizzard, poses with a buddy.

Those fingerprints have covered a wide range of topics, including minor features like Azeroth’s two moons. Golden’s creation was the task of finally revealing the whole narrative of one of the game’s most important and dynamic characters in the forthcoming book World of Warcraft: Sylvanas, which will be released later this month. She’s also seen an industry develop and change over time.

The next Sylvanas book by Christie Golden will be released on March 29, 2022.

“There’s a lot of energy and passion here, and it’s a lot of fun to be in these story meetings because you’re dealing with individuals who are at the top of their game,” Golden adds. “I always remember these jam sessions with such affection. Even before I was officially joined, I felt like a part of the ‘Blizzfam.’”

Golden’s path has brought her from never having played a video game to becoming an important member of the team that brings these worlds to life. She overcame her apprehensions about entering the game industry because, as she puts it, “Like recognized like” – a storyteller found herself in a culture that loves storytelling.

“A buddy of mine, who had played the original Warcraft and Warcraft II RTS games—long before World of Warcraft, even before Warcraft III—suggested to me, ‘I believe you should give it a try.’ “They’re a great organization that cares a lot about its mythology,” Golden explains. She had authored Lord of the Clans, a book that would provide the basis for Warcraft III – and start Golden’s streak of adding to and extending the mythology in new and unexpected ways – only six weeks after her first meeting with the Blizzard team. “Fun fact: Thrall’s mother is one of the first people you encounter in Chapter One. Because she had never been mentioned in the mythology, I was free to create her both a personality and a name: Draka. Now she’s in Shadowlands, and it’s so fantastic that the team’s choice to include her in Maldraxxus enabled me to complete a circle on one of the first characters I ever developed for Warcraft 20 years later.”

In the first episode of World of Warcraft: Shadowlands, Sylvanas confronts the Lich King’s troops.

Golden was drawn in by the team’s natural reverence for the mythology, but it was the creative freedom she was allowed to explore in the Warcraft environment, as well as the team’s intrinsic knowledge for the distinctions between a prose book and a game, that kept her going. One was always changing and developing, whereas the other required time and room to breathe. Golden waxes ecstatic about the freedom she was allowed to use her creative muscles, and how she can now see how important those contributions – large and little – were to the world of Warcraft.

“I didn’t think much of it at the time, but now I’m thinking, ‘Wow, the person who wrote the majority of the Warcraft novels is a woman, in an industry dominated by guys,” Golden adds. “However, I didn’t know how crucial it was at the time.” It was simply me doing something I liked while working with individuals I enjoyed working with.”

The Future of Sylvanas

It’s reasonable that Golden has strong ties to Warcraft and its characters after being a part of the world’s fabric for so long. While she is informed on the story’s aims and the sorts of characters the team would want to include, it is up to her to identify the spirit that drives each character to be fascinating (even if the soul ends up fracturing).

Golden notes that her method nearly always begins at the same place. “I always write with two driving questions in mind: What causes decent people do evil things? And how come some individuals survive, get back up, and fight while others do not? Those have always piqued my interest. Sylvanas, on the other hand, ticked a number of those boxes for me. It’s fascinating to consider who you’d be if your soul was ‘broken.’ How similar would you be to yourself? All of these things provide excellent narrative opportunities.”

Golden will eventually tell Sylvanas’ whole narrative in the future book, from childhood to the present (“I got the incredible chance to expose her parents to the legend!”) Adding depth to a figure that has been in the spotlight for a while. “I aim to give each character a human side. ‘Humans are people, whether human or Orc,’ I like to remark. That comprehension is crucial to me. And now we get to follow Sylvanas from infancy through…well, I probably shouldn’t tell!”

To say the least, it’s been a long and winding road, replete with losses and difficulties, as well as modest but significant successes. Golden examines her own future and sees a similar road to Sylvanas’, but one with (hopefully) a brighter horizon.

“I’ve seen a lot more women and people of color in our meetings in the five years since I joined Blizzard full-time,” Golden adds. “We’re seeing more female athletes.” Geek culture has become mainstream. ‘Which game do you play?’ is the question. ‘Do you play?’ is no longer an option. And that’s fantastic. The world is changing, and we aim to adapt with it as well.”