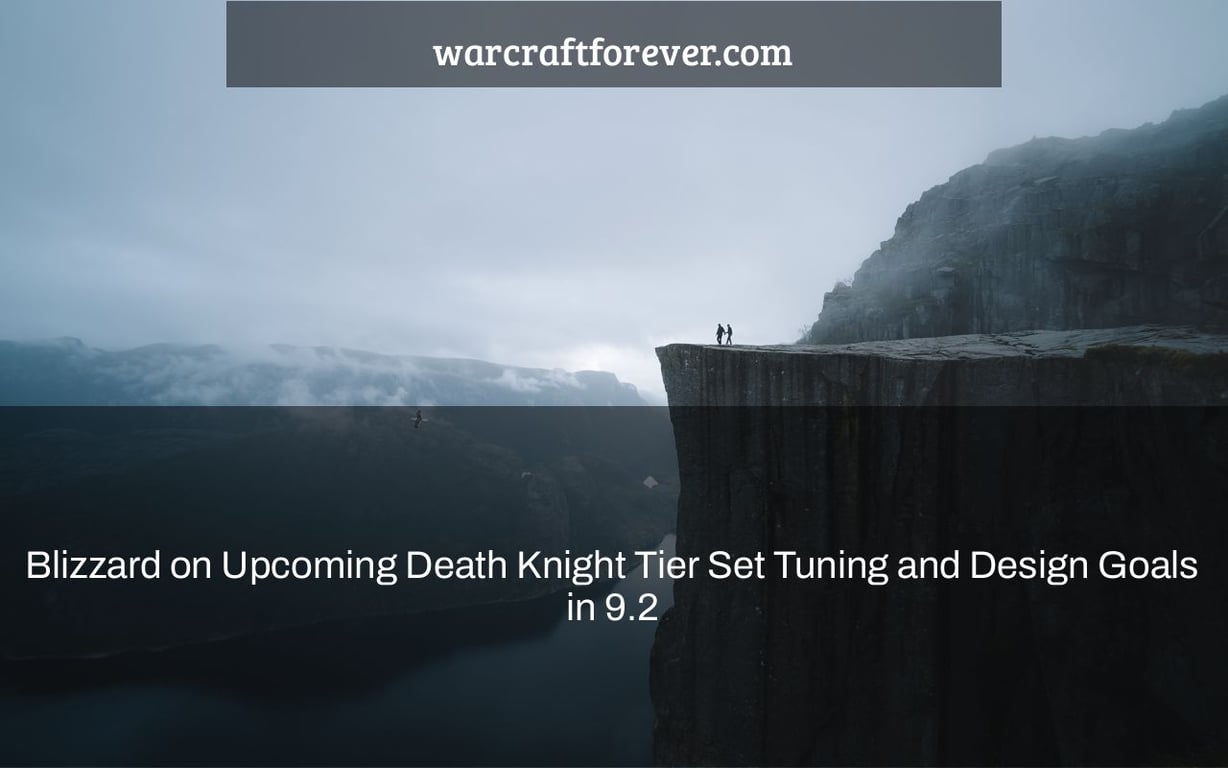 The latest 9.2 patch for World of Warcraft is in the works and it will bring with it a number of changes, one being the new Death Knight tier set that has been subject to feedback from players about how strong this class could or should be at certain levels. Designers are now looking into ways to tune these abilities as well as their design goals in order to create a more balanced experience overall.

Hello, everyone! I wanted to share some updates on the future of Death Knight’s sets and tweaking, per spec, now that the current PTR release is out.

As a general disclaimer, Tier Sets as a feature is tuned asynchronously across all classes, so while it may appear that some sets are being unfairly buffed/nerfed, our goal is to hit the same target across the board – while there will naturally be variance, this means that comparing future plans detailed in this post to classes that have yet to receive tuning or have recently received an update to their functionality isn’t particularly productive. Let’s get this party started with some fantastic news!

This set’s upgrade was eventually released on PTR this week, and it seems to be warmly welcomed thus far. As some of you may have noticed, the 4-piece is a bit different from the one I uploaded before, but it still aims to have an Execute theme to the set while not tying the whole set’s power on those windows.

From here on out, there aren’t going to be any substantial upgrades beyond tweaking, but one modification that will be made (hopefully in the upcoming release) is for the 2-piece to only stack Harvest Time on Scourge Strikes/Clawing Shadows that cause Festering Wounds to explode. This is in response to comments that you just slam Scourge Strike/Clawing Shadows in your execute window without respect for Unholy’s primary gameplay, which would be unsatisfactory yet required to perform effectively.

Overall, I’m curious to see how this one works now that Raid Testers have access to it, and I’ll be adjusting it when it has had some time to sit.

Coming in the next update will be a change aimed at addressing how Blood’s set performs in Solo Tanking/Raid Content (where you are only tanking a fraction of the time, and the amount parryable attacks is often not under your control) and how it performs in Mythic+ / AoE tanking, where it performs far better. The change (which is also being applied similarly to Protection Paladin’s set, as they have a similar bonus & dichotomy) reads:

‘Whenever you take damage, your weapon has a chance to lash out, Heart Striking your adversary, equal to your parry chance. The Dancing Rune weapon now summons two more Rune Weapons.’

This update has a few benefits, such as activating even if you’re not the primary tank (but still in range) and triggering more often against specific opponent kinds and bosses who wouldn’t have been impacted before, such as those that primarily cast spells. This modification will also come with a longer internal cooldown than before (because to how often it will trigger, and honestly since y’all already had a bug that allowed you to solo whole dungeons this cycle), but it, like other benefits, will be tuned.

Finally, there’s a bug that prevents the 4-piece’s Heart Strike from functioning as a true Heart Strike, which has proven a little more difficult to fix than anticipated – this will also represent a significant power boost, as they’ll be able to interact with the 2-piece’s strength stacking as well as generate Runic Power.

Lastly, the bad news. The proposed bonus we talked about last time has proven to be a lot more difficult to implement than we’d hoped, and considering Frost has a functional & balanced 2-piece, it’s been hard to prioritize solving it over focusing our efforts and dev time on more critical elements of the patch. At the risk of leading you on, there is a chance a new bonus could be considered on the conditions that 1) the aforementioned elements are finished with time to spare and 2) we have the QA resources to support testing it later on, which isn’t a non-zero chance, but the more-than-likely outcome is what’s currently on PTR will stay without major overhaul for 9.2’s launch.

To reiterate from a previous post – Frost’s set is exactly on-target for our tuning goals at the moment, and any rework or update would be to repackage that same power level in a potentially more interesting fashion, so this isn’t a concern that Frost Death Knights will have a ‘bad’ or undertuned set. Regardless, we know for those of you that were looking forward to testing it that this news is disappointing, but it felt better to give you a transparent look at the why & how rather than to stay silent and cause further harm & expectations down the road.

So TL;DR – a power-neutral update will be coming for Unholy to fix a rotation issue during Execute, Blood’s being updated to smooth out the best and worst cases, and Frost is likely to stay as-is. After the next update where Blood & Unholy are updated, it’s likely that these posts will become less frequent (and certainly less lengthy) as we’ll be moving into the stages of reacting to feedback with smaller, mostly numerical tweaks to hit our final tuning targets before it’s ready to go.

I’d want to express my gratitude to all of the Death Knights who have helped shape these sets into what they will become in the future, both via your testing and the time and effort it takes to record errors and create instructive postings. Have a wonderful week!