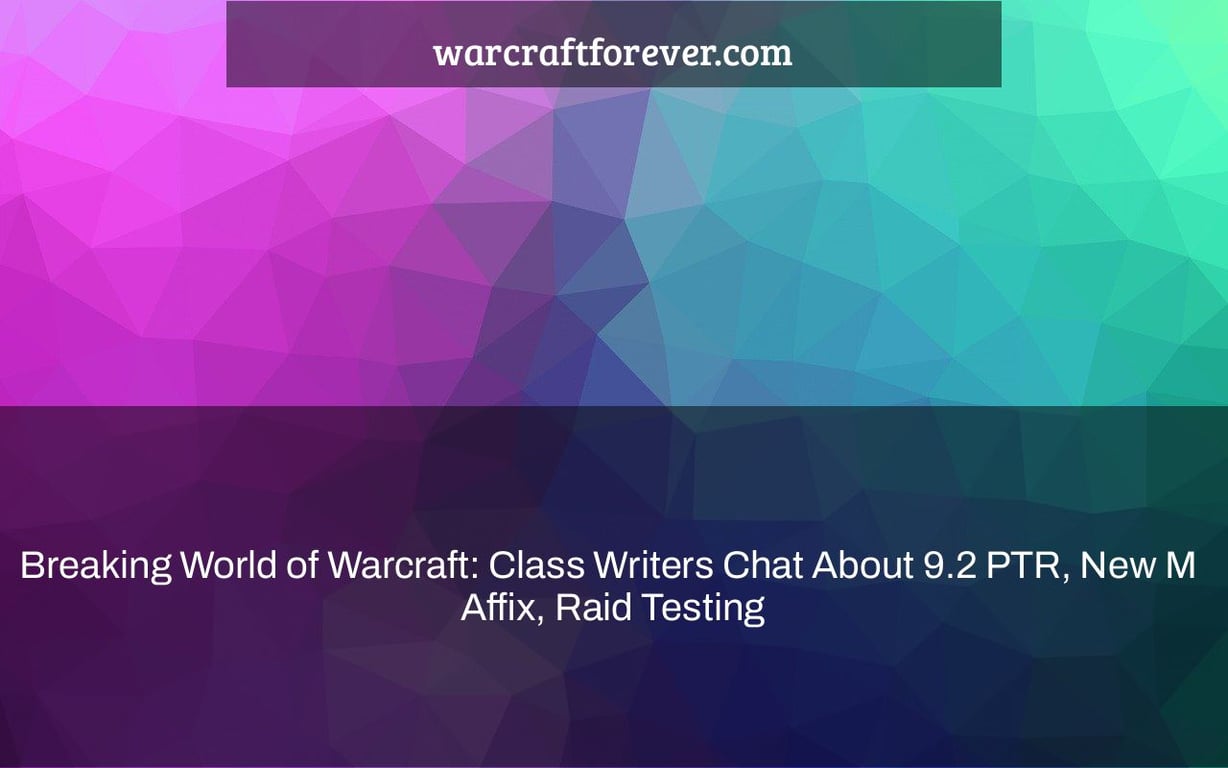 With the release of patch 9.2, players are already taking a peek at what’s in store for the next tier. This guide to changing affixes will keep you updated on upcoming changes and any current news surrounding M+ dungeons and raids.

Class writers from the World of Warcraft’s “9.2 PTR” have been chatting about what new changes are coming to the game in this patch. The class changes will include a new M+ affix, raid testing and more. Read more in detail here: wow 9.2 patch notes class changes.

Breaking World of Warcraft delves into the new 9.2 mythic plus affix, including all of the flaws, updates, and potential fixes! Not only that, but we also discuss the new raid with our guests Mandl, Publik, Guiltyas, Wordup, and Panthea, as well as the new setting, the constant changes, and many more juicy topics, so if you like our little world of warcraft podcast, subscribe and leave a comment to let us know what you think:)

The impact of routing (PuGs will probs just slam the haste one all the time) For example, in Mists, you are now need to complete the most difficult pack in the dungeon in order to trigger the bonus. +3 mobs as a target The topic of relic killing – rng kills

Auto power isn’t all that enjoyable. Items? Is there a second action button?

DR relic is a bit of a jerk and will most likely be skipped like sogg Kiss/curse isn’t so good – making packs difficult sometimes backfire. “Preference” for buffs

After two seasons of route stasis, maybe this isn’t the best move to do? Do anyone want to modify the routes? The affix design (mists labyrinth) has been shoehorned into the dungeon design. Allow all doors to be opened during conflict). If the relics are activated, you may use them to strengthen weak packs and risk-reward individuals into fighting tougher packs with the boosts. Increases the breadth and possibilities of the game, deepens the paths, and allows tactical moves to emerge. Putting all of the relics in the toughest packs to entice people to play them merely ensures that they’ll be skipped even more. Mobs with a value of 0% are usually skipped. Incentive

sanctum is more thematically coherent than this. sanctum is less emo and more bright. HUGE boss arenas PLUS a LOT OF MOVEMENT (telegraphed, not random) At the very least, one warlock is required. Between exams, the bosses change.

Instead of a hasty, half-baked, and largely directionless patch like 9.1, 9.2 seems like a lot more iterative process. It’s incredible to see developers observing, iterating, and talking to the community as if they’re in the middle of a patch cycle. Changes to trinkets that are retroactive. The SoD ress trinket is no longer a ress, but a cheat (allowed you to break mechanics). Grab it while you can, it’s a stronger version of Al’ar with a shorter CD. They certainly care about patch 9.2. The early version of 9.2 PTR was similar to 9.1, although it was actively iterated on. Scarizard’s RWF double leggo thing gets a shoutout, but the letdown comes from the varied comp class items.

The trickle stinks after a year. Why not include a dungeon from the upcoming expansion pack as “teaser” material for the current expansion? UBRS between mop and wod, theramore scenario during cata, etc. provide an instant respite from the monotony. It’s a good method to hook folks.

Mandl, Panthea, Wordup, and Guiltyas are class gurus for Wowhead and other services. Our guides provide examples of their work.

You can also follow them on Twitter, along with Shadow Priest class expert, Publik, and hosts, Marcelian & Flame:

The “wow news” is a website that covers the latest information and updates on World of Warcraft. It has many sections, including game guides, class writers chat about 9.2 PTR, new M+ affix, raid testing.