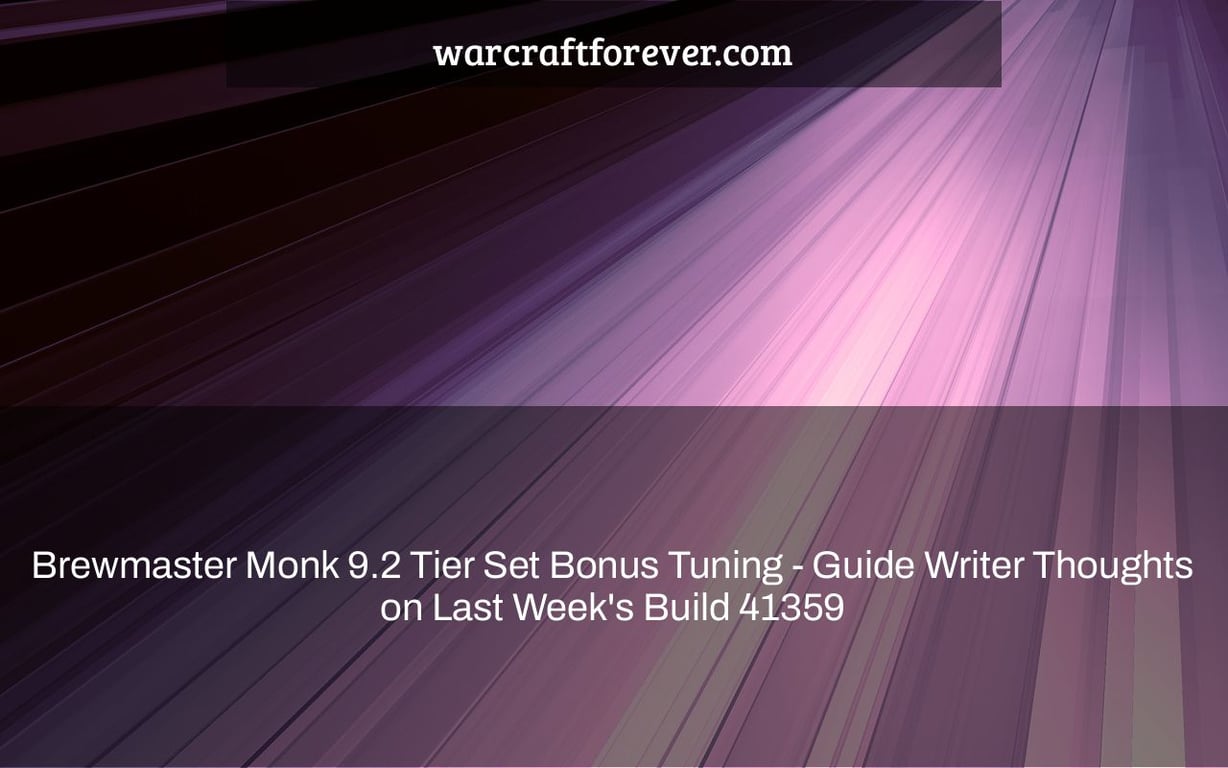 While the new tier set bonuses are far from perfect, there’s no denying that they’re a step in the right direction. In this week’s build we’ve seen some changes to how Brewmaster Monks can use their Tier 3 talent, but these will likely be fixed before launch and I recommend waiting for an official patch note if you want to try these out. Nonetheless, let me know what you think! 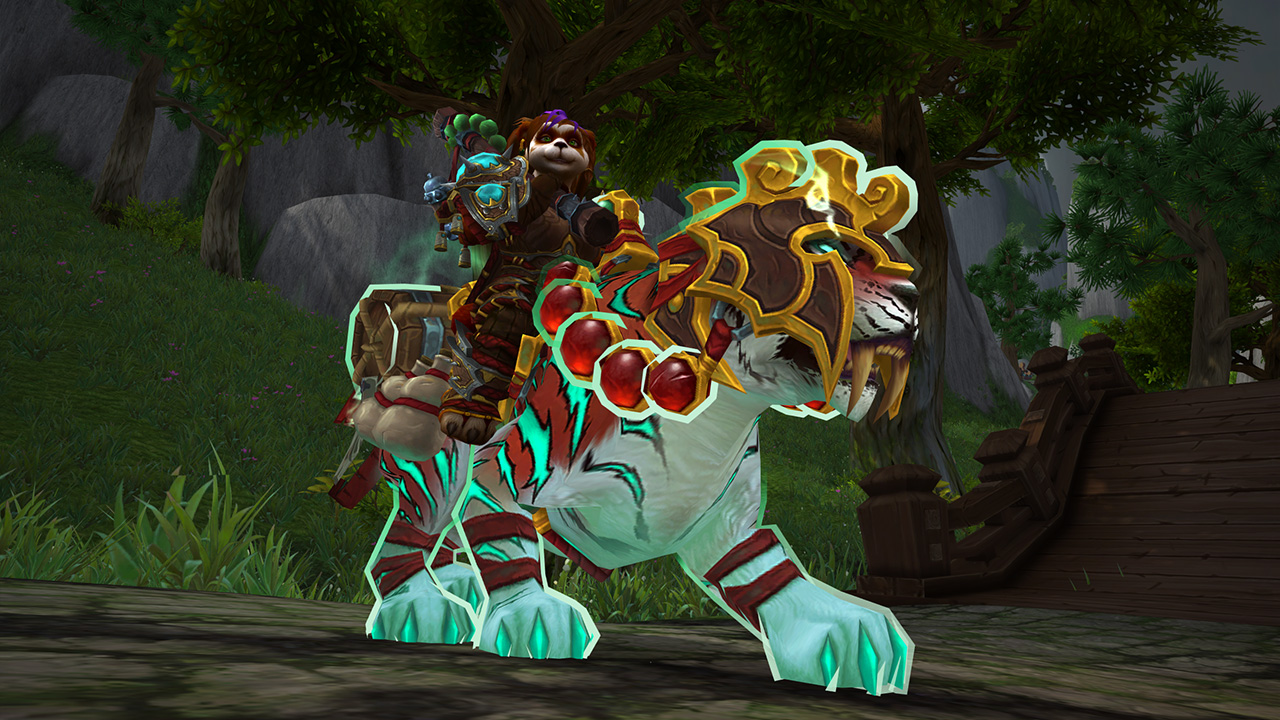 Llarold, the author of our Brewmaster Monk guide, has weighed in on the aforementioned changes to the Brewmaster Tier Set bonus!

It’s Good, the New 4-Piece! The Brewmaster Monk Sepulcher of the First Ones 4-Piece Tier Bonus has been completely redone, and it looks fantastic. In fact, it allows Keg Smash to do more damage, heal itself, and deliver a significant health boost buff that can be easily sustained at 100% efficacy. It’s around a 40% gain in health after the first round of testing, which is ridiculous. This will very certainly be nerfed, and despite my desire for it to remain unchanged, it should be.

I’m logging into my 252+ ilvl Blood DK to compare base HP stats without any buffs other than this Monk 4-piece for a simple eyeball comparison:

That’s nice, but it’ll almost certainly be nerfed, and rightfully so. A few ideas have already been thrown around the Monk community, and these are the two that I believe are the most effective:

The set’s biggest disadvantage is that it limits your Covenant and Legendary options. Charred Passions is still the best single-target DPS option, but the gap between it and Stormstout’s Last Keg is closing, and Stormstout’s Last Keg is now the always-better option in any AoE or cleave circumstance. Because of the defensive value it may bring, Mighty Pour has recently gained favor in Mythic+. Even if it is heavily nerfed (50 percent), it will go back to being underutilized once this 4-piece is released.

Similarly, because to its stronger harmony with this 4-piece, Kyrian emerges as the obvious frontrunner Covenant option.

None of this bothers me. Kyrian and Stormstout’s Last Keg is the most popular Brewmaster Monk setup across all content. It’s the build I’m most fond of. This set just improves on something that already works well. This widens the gap between the best setup and the rest of the pack for players that operate outside of the regular meta.

However, it will still be a valuable benefit for Necrolord and Night Fae Brewmaster Monks. On the contrary, regardless of your Covenant choice, it’s extremely great, and I believe it simply shows how non-Kyrian Covenants need to be polished up to be competitive. Venthyr Brewmaster Monk, on the other hand, is a hopeless case.

I’ve only discovered one problem, and it’s one we’ve encountered before in PTR and Beta testing. The health growth limit, like many other capped effects that scale from player damage output, may be bypassed by landing a big enough crit.

The following is an example of how this works in practice:

Even if it were planned and released as-is, there’s no way to utilize it since there won’t be any low-level NPCs roaming about in dungeons and raids, and it won’t function with creatures. It’s nice to see a seven-figure health pool once again, if only for a short while.

HOWEVER, WHAT ABOUT THE NUMBERS?

In ST, the harm is increased by roughly 6%. With the other tank sets, this provides a competitive advantage. It’s a touch unimpressive when compared to Blood Link from Sanctum of Domination (15-20% of total damage in ST), but that’s true of all the tank setups. In ST, it’s adequate.

It’s fantastic in AoE/Mythic+, providing well upwards of a 10% damage boost and steadily growing in value as the number of mobs increases (up to the soft AoE cap of 20). This follows the same pattern as the other tank tier sets, and despite first fears, it’s actually a lot more conservative in terms of AoE damage than some of the crazy tank tier sets (VENGEANCE DEMON HUNTER!!!). It’s acceptable in ST, but excellent in M+ and AoE. This looks to be the desired outcome for all tanks.

It’s also extremely beneficial for healing. Because healing is less constant than damage across tanking circumstances, stating a statistic like “it’s approximately a 20% boost” is generally a stretch, but basic math estimates it’s like… a 10%-20% increase in single target healing. This is excellent.

Due to the fact that both battles were tank-swap encounters with relatively little damage, the data from this week’s raid testing was completely inconclusive. It was basically producing 1200 HPS, but it was also overhealing by 85%. There isn’t enough evidence to draw any conclusions; additional testing is necessary.

Now that Keg Smash is on a 6s CD, how about Lay on Hands? Monk is the best! Since the new incentive was announced, I’ve heard this attitude expressed a few times.

20k HPS for “Lay on Hands every 6 seconds.” It’s worth a little over 3k HPS after 6 minutes of testing on a 5-pack of training dummies. That’s roughly 600 HPS per target, thus it’ll definitely be worth 3000-5000 HPS on trash and… 600 HPS on monsters in regular Mythic+ conditions. It’s decent, but so are the bulk of the other tank buffs in Mythic+ and AoE.

Ursoc’s Fury Remembered, the Bear Druid Thrash Legendary is the most similar benefit. For the typical high-level Bear Druid in Mythic+, it provides roughly 2500 HPS on trash. The most significant difference is that Bear Druid may stack many cooldowns for massive bursts of tankiness and damage. Monk has a more constant rotation and cooldowns, but it can’t have such huge burst windows. Overhealing will squander a lot of the self-healing from the Brewmaster Monk 4-piece bonus, which does not happen with the Bear Druid absorption shield.

It’s great, but that’s no excuse for going insane. The health scaling is the only aspect of this perk that is overdone.

This is the product of Blizzard’s determined effort to interact with player input. That’s fantastic. It’s incredible that we were able to take an almost worthless 4-piece and convert it into this fantastic extra in under a week.

“Keep providing feedback,” I assume the lesson is, so here’s mine: This is awesome!