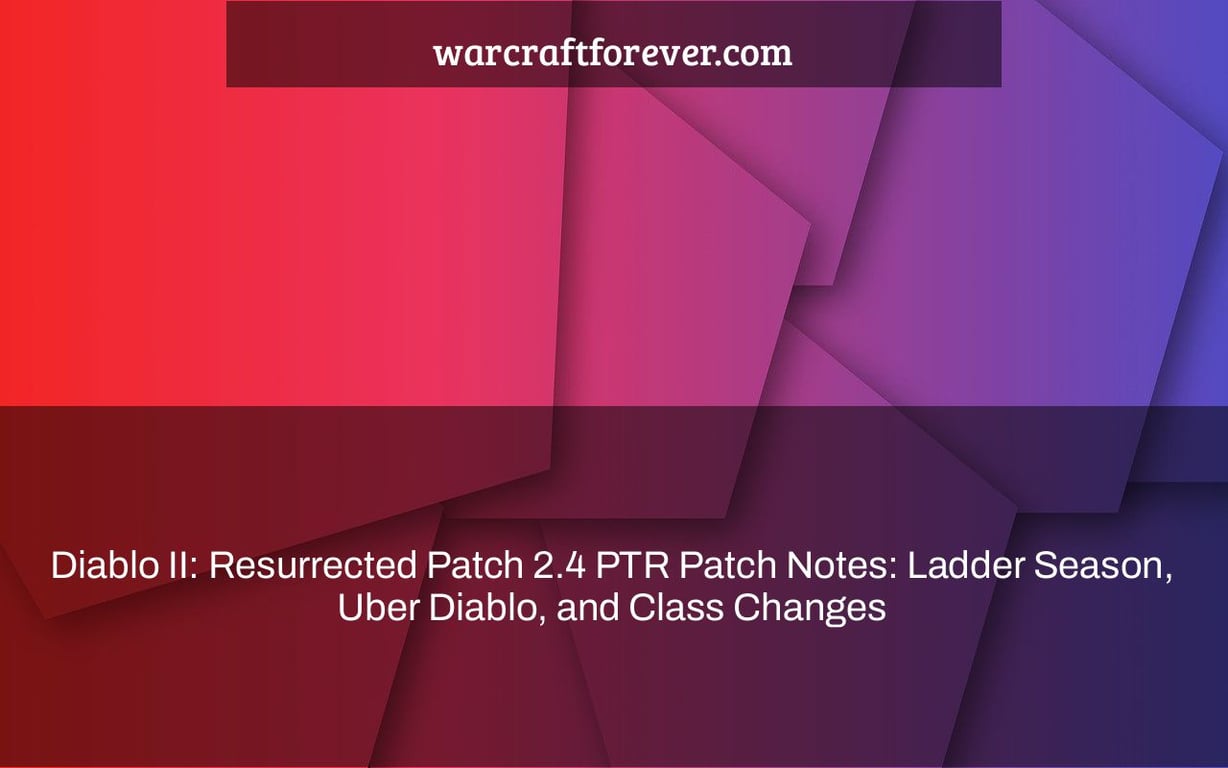 The Patch 2.4 PTR is now live and brings a plethora of changes to Diablo II, including Uber Diablo and the Ladder Season! Check out these patch notes before jumping into Battle.net next week.

The “diablo 2 release date” is a patch that was released on the “Diablo II: Resurrected” PTR. The patch includes Ladder Season, Uber Diablo, and Class Changes.

Sanctuary’s Heroes Thank you for your kind input on some of Diablo 2’s first modifications in almost a decade. We’ll get back to you with revisions based on your feedback, comments, and survey responses. We focused most of our efforts on areas where the feedback was very positive, as well as those places where we may not have pushed hard enough for a substantial shift in this round of adjustments. More feedback on these revisions would be very appreciated.

Please be advised that there may be occasional maintenances, outages, hotfixes, or small updates as we proceed through this PTR. All of the modifications made in this PTR are subject to change. Before we make these modifications permanent for Live, we’d want to get some feedback and measure how well they’re received. The following content upgrades are recommended for PTR participants to investigate and play:

Single-player mode (offline) As a consequence of our new balancing improvements, Patch 2.4 makes changes to character save data. To let gamers test offline material, a new folder has been established. Players will be able to try out classes from prior Diablo II games. Import those character files into this folder to be resurrected.

Please post your comments in the PTR Feedback section. Please report any issues that you find in the PTR Bug Report forum. So, without further ado, let’s get started on these new features!

PLEASE NOTE: The game stuff covered in this blog is not final and may change at any time.

We are very excited to invite you all to test the Ladder functionality on the PTR. The Diablo II: Resurrected Ladder launch represents an optional ranked competitive system of the game through a series of modes available to select from with a fresh Ladder-specific character(s). Each mode will have their own leaderboard where players compete to strategically gain experience within a limited timeframe while having access to Ladder-specific content. When the Season of the Ladder ends, leaderboard rankings will reset, transitioning characters to non-ladder mode, giving players an opportunity to store their hard-earned treasured loot as a new Season of the Ladder awaits them.

For the PTR test, we’d want you to concentrate on the front-end presentation of the Ladder and how the new balance modifications affect Ladder play.

The method for summoning Uber Diablo in Diablo II: Resurrected will stay the same as it was in v1.10, which is by selling Stone of Jordan rings. However, we’ve made some adjustments to how and where that progress is measured, which we think will improve the community’s overall experience. We’re looking forward to hearing from you!

The regional database will now keep track of Uber Diablo progress for each game type. Uber Diablo will spawn for everyone in the same area, not just those on the same server instance, after the threshold is reached by selling enough Stone of Jordan rings.

Javelin of the Plague

Arrow that is being guided

Fury of the Blade

Developer Comments: We saw an opportunity to make Attack by Leap more viable by changing to fantasy to make the leap itself an attack. By doing this we feel like the combat viability of the skill will increase while still preserving it as a movement skill. We feel that this change paired with the animation changes we made to it brings the Attack by Leap more in line with the fantasy and feel we want it to have.

Mastery of the Sword

Mastery of the Axe

Mastery of the Mace

Mastery of the Spear

Barbarians run out of throwing weapons way too rapidly, according to the developer. Adding the ability to not consume as well as the ability to refill will enable a throwing barbarian to be viable without having to visit town.

Developer Comments: The Druid’s ability to summon just one kind of summonable at a time has limited the build’s practicality and prevented the fantasy of a Druid Summoner from reaching its full potential. We believe that a druid’s ability to call all of his buddies at once will provide for a more engaging and enjoyable gameplay experience.

Developer Remarks: We’ve discussed the best technique to advance shapeshifting Druids. We’ve decided to stick with the contemporary (Balance PTR 1) method of computing attack speed for the wereforms after considerable deliberation. The werewolf has been rebalanced to enable it to travel at even higher rates than before. Werebear, on the other hand, is intended to fulfill the ideal of a strong, unstoppable killing machine. Uninterruptible attacks and talents have been added, as well as enhanced damage and protection. While this will alter how players have previously played the Werebear, we believe it is more in accordance with the intended fantasy. We’ve provided attack speed benefits to Maul for players who liked their quick werebear builds, but we also hope that the new Werewolf adjustments will offer them the same style of play, since it is now the faster form.

Developer Remarks: We’ve heard that golems aren’t considered important enough as talents. We expect that by making these adjustments, they will seem strong enough to be used more often without undergoing a major revamp.

Shock to the system

Developer Remarks: We think that it is an intriguing mechanism that is worth attempting to balance appropriately after viewing comments on the elimination of area damage scaling in our PTR Balance Patch. It has been re-implemented with a lesser damage scale than before.

Developer Remarks: With these modifications, we intend to continue to boost the viability of non-Act 2 Mercenaries so that they see more use, as well as drive each one deeper into their class archetype by enabling them to wield class-specific equipment.

UPDATES TO THE LEVEL AREA AND THE MONSTER

UPDATES IN THE GENERAL AND MISCELLANEOUS

HOW DO I GET INVOLVED?

You must have a Diablo II: Resurrected game license tied to a Battle.net account in good standing (i.e. one that hasn’t been suspended or banned) to participate in the public test. In addition, if you haven’t already, you’ll need to download and install the Blizzard Battle.net desktop software.

Step 1: Open the Battle.net desktop software and restart it.

Step 2: On the left-hand menu, go to the Diablo II: Resurrected tab.

If you don’t already have a PTR account, one will be established for you. Accounts from all areas are eligible to participate in the PTR, which is accessible in all supported languages. Click here for more information about installing and starting the PTR.

MANY THANKS TO THE COMMUNITY

Your help is much appreciated by our crew. We released Diablo II: Resurrected last year, and now it’s 2022, and we’re excited to include these new features into our game. Thank you for participating and for your continuing support.