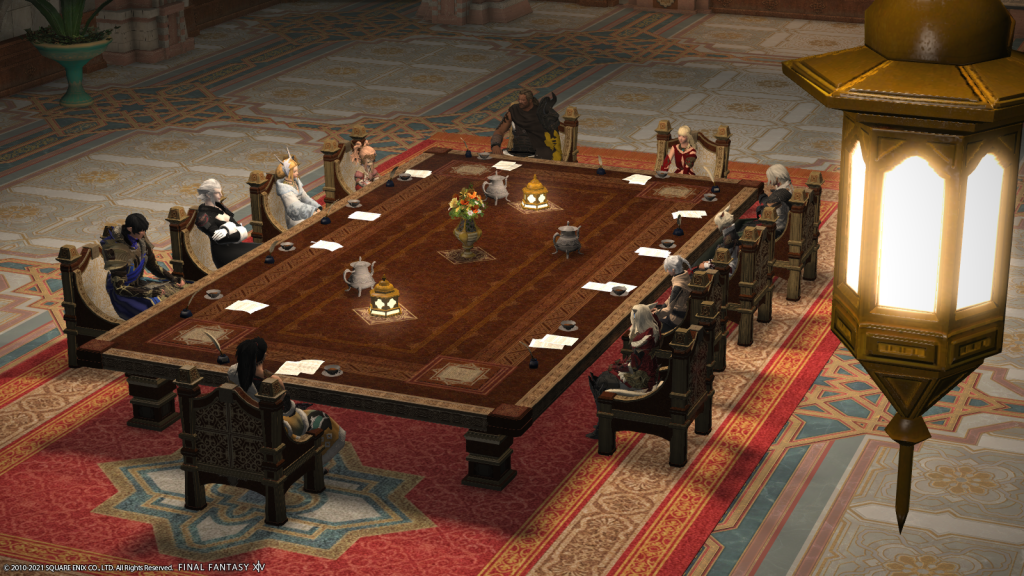 The “ffxiv stormblood review reddit” is a review of the new expansion for Final Fantasy XIV. The reviewer goes into detail about what to expect from this game and how it compares to previous expansions.

The latest expansion for Final Fantasy XIV, Stormblood has been out a few weeks now and I have written a review of the new content! This episode includes brief discussion about my experience leveling in this expansion.

That’s right, I began my next leg of the FFXIV trip on Sunday, and before I knew it, I’d progressed far enough that it was time to wrap up the expansion plot. So, lo and behold, I found myself in a purple forest of Shadowbringers, and I can now gaze back on the whole Stormblood expansion.

I didn’t complete all of the material, skipping a few raids (namely, the animal farm battles) and a handful of side dungeons, not to mention all of the side quests, which I want to do later. However, the main plot is finished.

When it came to the plot, Stormblood was the expansion I enjoyed the most, from the first task to the last. There’s a “leveling” main arc that culminates in an epic finale, then the plot ties up all loose ends with patch content, leaving no stone unturned while advancing the tale ahead, and the last leg throws hooks for the future, establishing the theme for the next expansion. Unlike Heavensward, which was generally solid but not flawless, Stormblood was consistently engrossing throughout its lifespan.

I like the careful mix between massive politics, where you can fully comprehend the movement and purpose of armies and events in the grand scheme of things, and intimate character tales and growth. Every character’s reaction to current events is meticulously examined, and you will understand how and why the characters make their judgments about how to continue and what to do with their own and others’ lives.

Old faces (Lyse, Leveilleur twins, Raubahn, sultana, Scions in general) and new faces (Hien, Yotsuyu, Asahi, Zenos, Fordola, Maxima, and a slew of minor boys and girls) got equal attention, were perfectly molded and developed, and you really cared about what was going on with them. That is what distinguishes a great piece of writing. 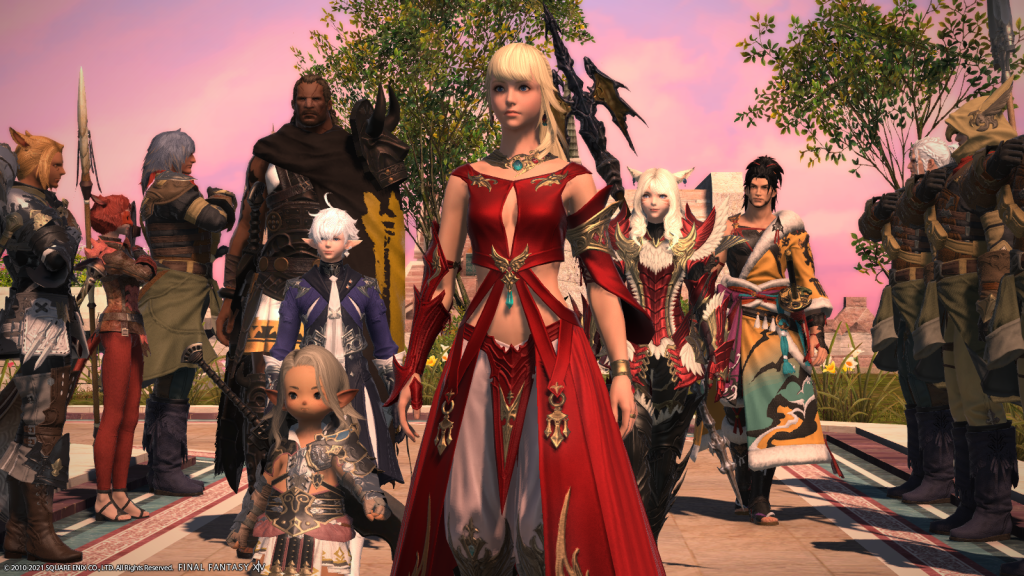 Yes, the main MSQ ended on a happy note, but the patch tale was bleak and sent us back a few steps. It ended on a disturbing note: the Empire did not give up at the very least, and continues to push steel and blood to the borders, which we barely contained, while you and your company of Scions collapsed and were clicked out of reality at this hour of need – as I understand (a little spoiler), to a shard/version of the planet, a sort of alternate Draenor. While I’m sure my other voyage would be fascinating, I’m already eager to get away from the home planet, where things are so grim.

The uprisings in both nations, the creation of peace and affairs in both the Far East and Ala Mhigo, the Empire’s pushback, the Ascians, and the last leg of the Scions’ BSOD: everything was done flawlessly. Character arcs were all excellent, notably those of Lyse, Hien, Fordola, and Zenos, with the exception of Yotsuyu. 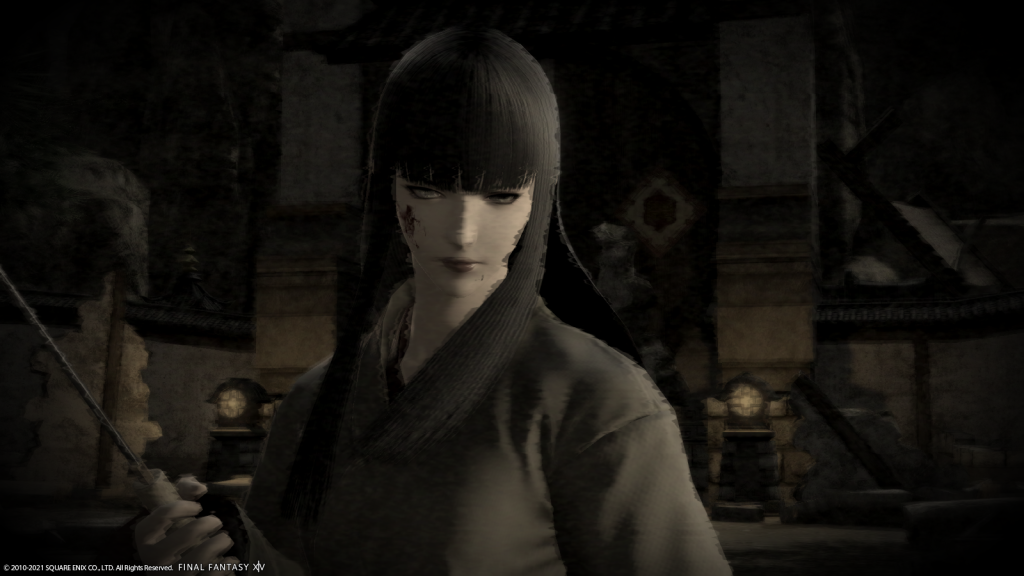 It was a fantastic character who I followed with bated breath to the end. They went a long way with hope, not redemption, up to a very tragic moment, and it all fell down the drain within the span of a few missions. It was not irrational to reduce all of the authors’ previous work to a general primitive material, but I had hoped for something else. It didn’t strike me as awful writing, like what they’re doing to Sylvanas in Blizzard camp right now, but I was upset because there was a lot of hope and anguish for Tsuyu’s well-being, and it was smashed in a flash. The raid, as spectacular as it was, was bitter, and the cutscene that followed smashed foot on what might have been an inspirational arc.

I’ve written a lot about this, so I’ll keep it short: yes, the zones did a good job of conveying the feel and mood of their nations, and no, Doma did a poor job of convincing us that its local “China” was adequate. Even the present amount of narrative arcs may have been done in numerous towns, which would have been an easy solution.

I’m glad to see that visuals become better with each expansion, and Stormblood was a big step forward. This is especially evident with foliage and water: in Gridania, a “mosquito swarm” of leaves and grass could easily turn off new players (if you could only see me tinkering with graphics settings for an hour to mitigate that at the start), whereas Stormblood’s flower beds, trees, and fields can truly compete with the best examples of other games. 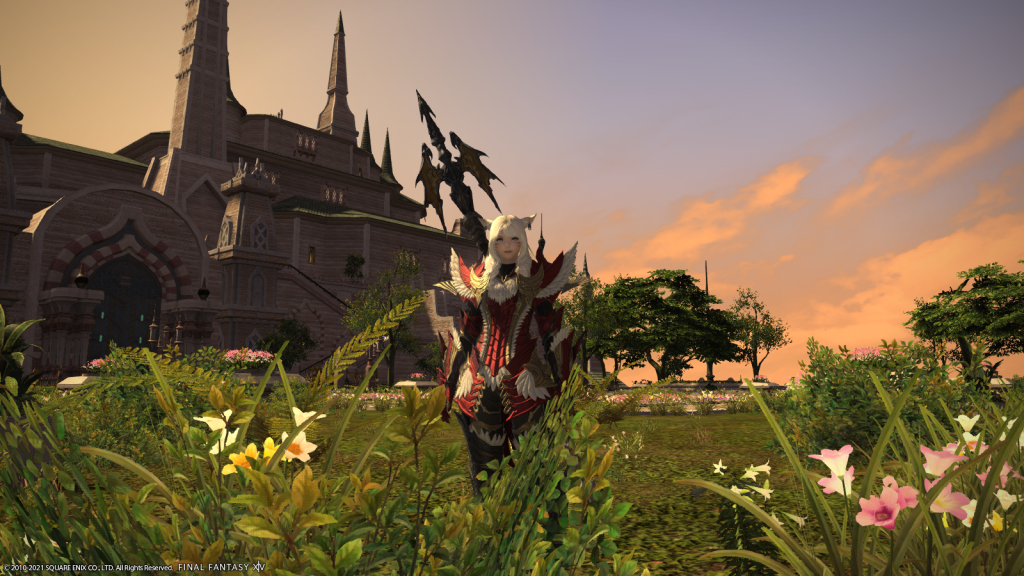 Unfortunately, not everything happened as planned. The bulk of the landscape is still made out of rocks, as are the cardboard structures, which are most noticeable in Azim Steppe capital and Kugane city. No one thought about how people really live in the Ala Mhigo district, making it seem more like a factory than a city for people – no seats, no parks, nothing just walls scraping the sky.

Fortunately, this is not an issue for the inside of the house/palace, hallways, and rooms – well, it’s pretty convincing that they were made for people there. Not to mention the group content – raids and dungeons are not only where the art team outperforms themselves, but they also make it the most spectacular, over-the-top, and each new dungeon and monster is always awe-inspiring.

The evenings are also a concern. Unlike WoW, for example, the day/night cycle varies every hour and a half, not according to server time. This isn’t a horrible move in and of itself; it solves the issue of people who only play at certain times of day by enabling them to view both night and day. The issue is how nighttime is handled.

For a media product, it’s just too near to reality. Everything — buildings, people, and the landscape – would be fifty shades of grey if you traveled at night, and heaven forbid you stumbled across some key sequence that would appear significantly different if you came across it during the day. Yes, it’s a real-life product, but it’s also a media product.

A comparison between the battle of Helm’s Deep in Lord of the Rings: The Two Towers with the struggle for Winterfell in Game of Thrones is a poor example. It’s a dark night in both cases, with just the torches that the characters have ignited illuminating the scene. However, in LOTR, you can see every single pimple and hair on an orc’s face, while in GoT, you can hardly discern what’s happening on amid a zombie attack. Sure, it’s not as horrible as FFXIV, but I can’t help but cringe when darkness falls. 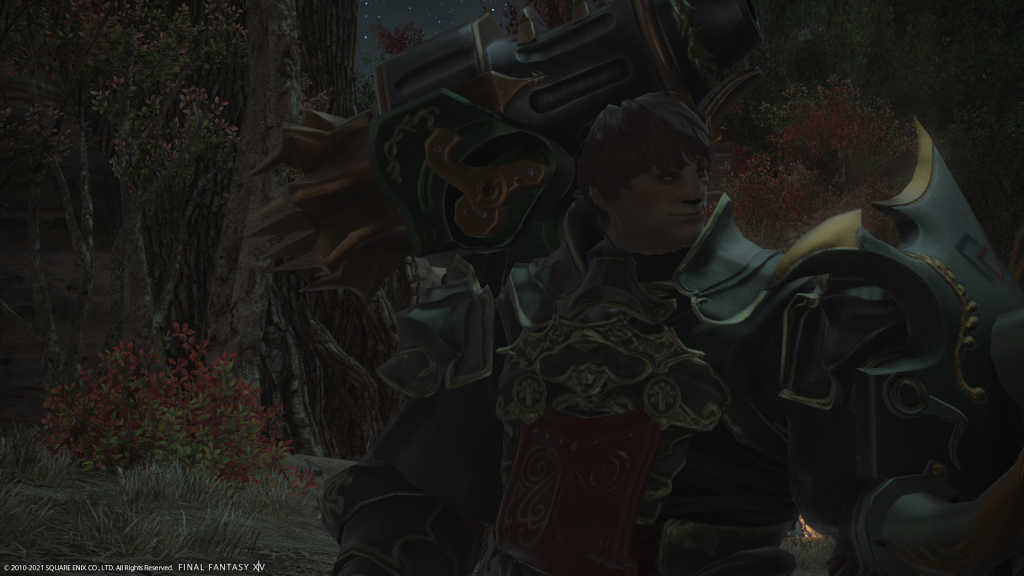 Also, artificial lighting is still a problem. As someone who suffers from astigmatism, the lanterns, windows, and other light sources in FFXIV during the nighttime remind me of how the world appears without my glasses: eliminating a circle-shaped halo from light sources would be extremely appreciated.

Enough said; I’m a big admirer of the game’s composers, and they didn’t let me down this time. I can’t help but wish Measure of His Reach was my song, and the ambiance tracks are wild, eclectic, and brilliantly played and composed, as they usually are. I find myself singing the eastern theme long after logging off, and Azim Steppe has one of the finest tunes in the game.

I’m not sure whether I have voiced my admiration for the Japanese fondness for piano compositions — as a keyboardist and pianist, I admire its widespread usage. Which makes it much more motivating for me to play them alone at home:)

Do I have to say it again? As always, it’s fantastic. Not only is there the gameplay, with its delicate dance with bosses and friendly groups, but there are also the settings and the fact that the art teams go completely insane with boss designs. Basically, every new monster and chamber is awe-inspiring, and every new dungeon is eagerly anticipated.

I die much too often for my comfort — maybe once or twice every dungeon, but I believe it is due to newbie concerns. Even if I study about boss abilities while in queues to plan my encounter actions and pick out the deadliest mechanics, you can’t really master it without trial and error, and once you do, the dungeon is a thing of the past, never to be returned except on alts and/or upgrading another class/job. 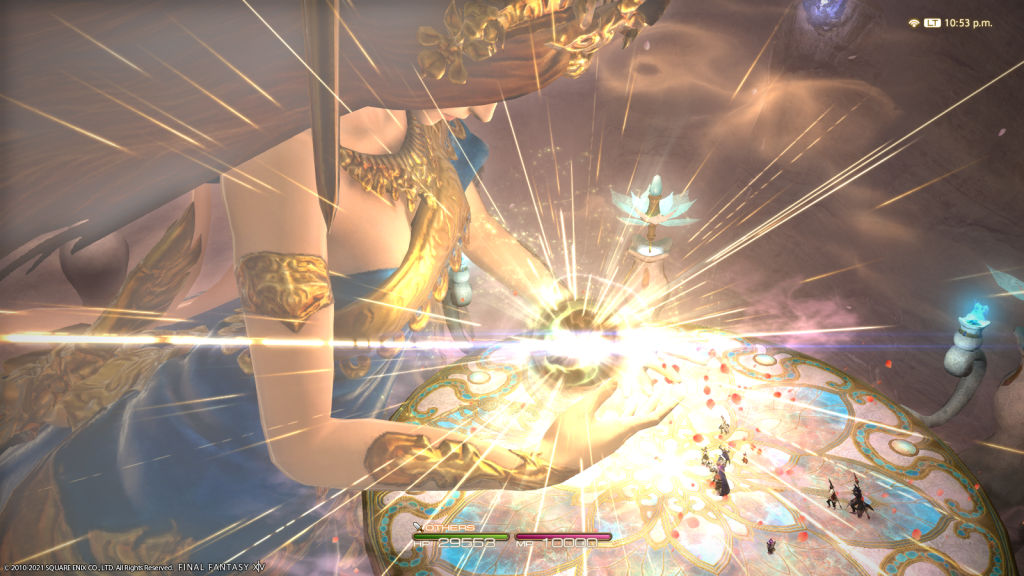 Furthermore, as opposed to, say, WoW dungeons, incredibly dangerous and harsh mechanics are much more common, so you don’t want to miss a vacuum zone, killing adds, standing in circles, and other such things. It’s not difficult to carry out, but if you disregard it, you’ll almost certainly die and be wiped out. Fortunately, there’s always a CR aka Raise waiting for dying individuals, and wipes – although unusual – aren’t a problem since people just get up and try again, debating and clarifying techniques as required. It’s not a big deal, but I’d want to do better:)

The conclusion is simple: Stormblood was an excellent addition that provided an incredible plot and character development as well as significant, significant improvements to the entire game, although with a few flaws. According to rumors, Shadowbringers is much better and the game’s peak to yet, so I challenge it to top this experience:) I’m already in, and since my WoW playtime has slowed to a still distant, but clearly noticeable pause, I’ll be heading to the First shortly to see it for myself. 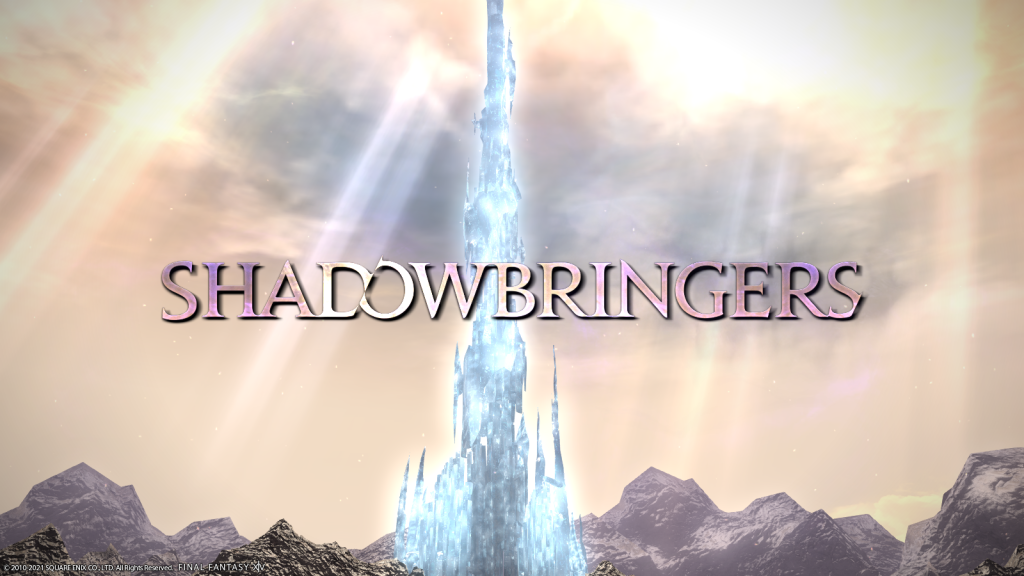 The “ffxiv expansion reviews” is a review of the new FFXIV: Stormblood expansion. The game received mostly positive reviews with some complaints about the story and lack of end-game content.

Is Stormblood worth playing?

A: Its up to you. The game will be around for a few years but there are currently no end-game content that is not already in the base game, except for some side quests.

Which ff14 expansion is the best?

A: You can find a detailed guide about which expansions are the best at https://www.gamefaqs.com/ps4/603243-final-fantasy-xiv/.

Is Stormblood bigger than Heavensward?

A: Stormblood is the latest expansion for Final Fantasy XIV Online, while Heavensward was the previous one. Despite this fact, they are not entirely similar in size. One of the main reasons that it would be difficult to compare their sizes is because of how long each has been available on release date.