You are here: Home / Warcraft / How Did Tier Sets and Legendaries Work Out in Sepulcher of the First Ones? – BDGG Thoughts 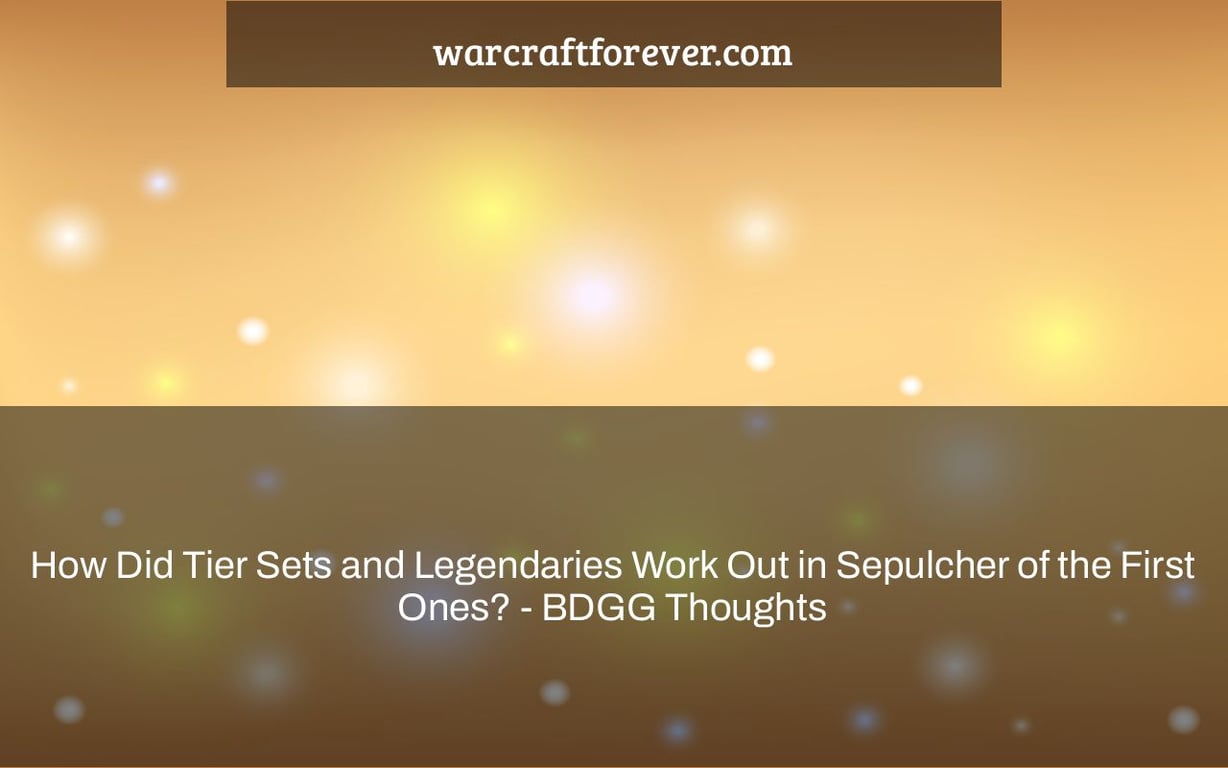 It’s a bit unusual for this game to have its own tier set, but Blizzard decided that was what they wanted and how you can do it too. This week we ask the question: How did Tier Sets and Legendaries Work Out in Sepulcher of the First Ones?

The “tier sets 9.2 m+” is a tier set from the Sepulcher of the First Ones raid in World of Warcraft: Legion. It was introduced with Patch 9.2 and can drop at level 100 or higher. The tier set consists of three pieces, each with its own unique stat bonuses.

One thing about Shadowlands is that Blizzard has tried a lot of new stuff and made some significant game design changes. We’ve seen variations on legendaries, changes in gear systems, and how the world’s best guilds optimize their gear, but it seems like the last tier of Shadowlands brought it all to a head. Furthermore, tier sets reappeared, having a surprise but massive influence on the race. It’s a complicated subject, but BDGG was able to help me out.

The First Ones’ Loot

Tier slots have been gone for a long time, but players have regularly expressed how much they missed the extra layer they provided when gearing and optimizing their characters. Both tier sets and masterloot were removed in BFA, therefore there was never a period when the two systems didn’t work together. Blizzard had to think of a new approach to establish tiers now that personal loot is required across all raid groups. Unfortunately, in their best effort to make tier acquisition more equitable, they made a catastrophic error by implementing a mechanism that could be exploited by the top guilds to ensure their 4-sets.

This wasn’t a significant issue in Week 1 since players depended on their loot RNG to see whether they could get up to three tier pieces. When the second game and the last three bosses were launched, however, we saw a new period of degeneracy at the top level. Players who looted two pieces in the first week were now promised a four-piece set for mythic development. Everyone else, however, had to re-roll the dice on Rygelon and the Lords of Dread. They would very certainly lose their position in the raid squad if they returned empty-handed.

The sensation of not being able to obtain 4 piece in time for mythic was the only thing worse than performing numerous community runs. If there’s one thing that has to alter about this system’s next layer, it’s that. Blizzard, on the other hand, seems to be on the case.

Of course, the post-progression methods have been quite beneficial. The Creation catalyst has gotten a lot of positive feedback.

The creation catalyst is excellent. RWF guilds’ “no 4p problem week 1” may have been resolved. In overall, it seemed like it opened late.

What Should Be Changed in Tier Sets?

Given the aforementioned issue, I was told that the raiders’ main priority was acquisition. Not just to battle those who didn’t obtain their 4 piece week one, but also to ensure that they were placed in the correct position or had an opportunity to get 4 piece on their alt. Changing characters in the middle of a race wasn’t unusual in past races, but it was exceptionally tough in this one.

Their purchase allows them to be exchanged by anybody with the required ilvl for that slot, even if it isn’t tier. Having the Jailer drop a universal Tier token might also have alleviated some of the challenges created by two of the components being unavailable during heroic week.

I’d want less overlap between tier set slots and other requested products. This might have been handled by increasing the number of tier pieces, but guaranteeing that all legendaries had at least one or two spaces that did not overlap with any tier pieces would have solved the majority of the problem.

Sunwell Plateau in The Burning Crusade was the final tier to employ more than 5 tier components. It was favorably welcomed at the time, and it may make a reappearance in current day.

Double Legendaries and Their Timing

When BDGG learned that we’d all be getting double legendaries two weeks into the tier, the instant reply was, “Great, this tier has a hard cap of two weeks and then it’s automatically cleared.” We, along with the majority of the RWF, felt that Blizzard’s objective was to keep the raid balanced with one legendary, while allowing double legendary to serve as a subtle nerf to the raid instance.

It was evident from the start that the tier was built not just around 4 piece, but also double legendary. Blizzard seemed to have gone out to create the most challenging raid possible. In this aspect, the mission was successful. We’ll discuss raid duration in more detail in another post, but suffice it to say that raiders prefer a tier that lasts less than two weeks.

In principle, I thought having double legendaries start after the tier finished was a brilliant concept. Soft nerfs, such as Shards of Domination or new Soulbind attributes, have made most levels easier over time without needing frontal boss nerfs in recent memory.

So, what’s the obvious answer in retrospect?

Instead of having to balance for either before or post 2x legendary and having one of them be severely unbalanced, Blizzard should have made double legendary accessible from the start of the tier so that they could perform one set of balancing and have it be valid for the whole patch.

This seems to be the most reasonable option. If we began with double legendary, the raid in its current shape seems to be a really decent 10-day tier. Learning experience.

In the remaining shadowlands, Blizzard has already revealed several major loot trials. They’ve also hinted that masterloot, or some variant of it, would be revisited. Whatever happens, most of the high-end community appears to like the notion of a more deterministic loot system. Blizzard may take this in a variety of directions. One may argue that loot RNG is essential to both an RPG and an MMO, but we’ve seen how much poor luck can cost players. We’ve also seen guilds ramp up splits on a regular basis, and it seems that fixing this will need major modifications to WoW’s loot systems:

I’d want to see Blizzard do more to reduce the relevance of heroic splits and tier funneling, if I may be selfish for a second. It’s self-inflicted, but it’s something we need to do to stay competitive, and protecting the players from themselves is part of game design.

Let’s take a quick look at Blizzard’s next project: Dinar Coins may be used to buy up to three things from the raid of the coin’s difficulty level. I believe Dorovon provided excellent comments here, which will assist in resolving any marginal issues or gamers that feel compelled to hoard their Dinar cash.

Personally, I’d like it if the Puzzling Cartel Dinars were not just a restricted type of cash, but also that you could never have a complete set of gear by utilizing these coins in a unique-equipped system. I believe that limiting the cash may cause some irritation among players who buy a weapon and then get a weapon from their Great Vault the following week.

It allows players a chance to “activate” their classes early by collecting that one major piece (examples here include sylv daggers, jaithys, jailer mace, and essentially any weapon/trinket that delivers a significant amount of power). I believe that simply three items for a complete season is insufficient.

This topic could fill several posts, not to mention a podcast or two. Hopefully blizzard continues to take periods of downtime as an opportunity to experiment with new systems and collect player’s feedback. I know BDGG is Looking Ahead to the changes that are coming for 10.0 and beyond.

The “wow 9.2 release date” was released on September 26, 2018. This update brought with it a lot of changes to the game. One of those changes was the addition of tier sets and legendaries. In this article, we will discuss how these changes have been received by players in the Sepulcher of the First Ones raid instance.