You are here: Home / Warcraft / How the Machine of Death Was Broken – 9.2 Campaign Details the Destabilizing of the Arbiter (Spoilers) 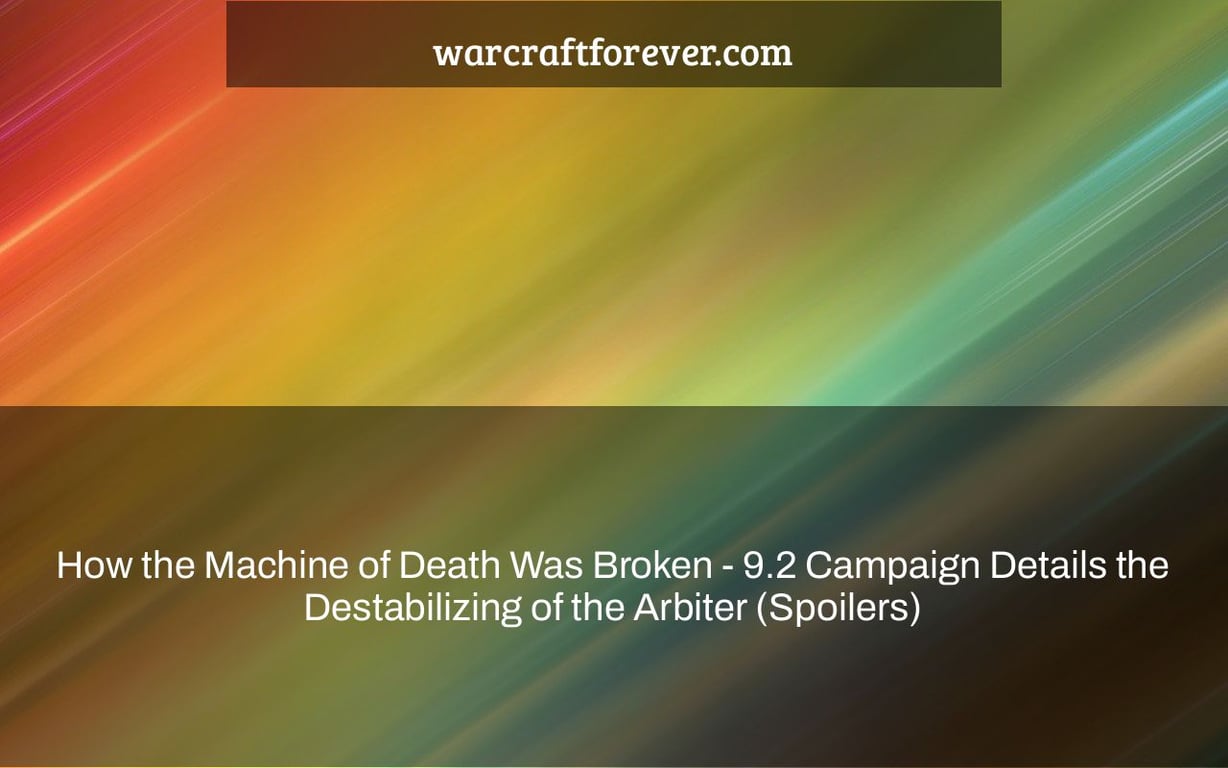 One of the biggest moments in World of Warcraft: Legion is when Garrosh Hellscream breaks his own machine, which caused a huge reaction from players. How did this happen and what could have been done to make sure it didn’t?

The “when did the machine of death break wow” is a campaign that takes place in the Warcraft universe. The campaign has been broken down into 9 different parts, with each part revealing more information about what happened to cause the events. 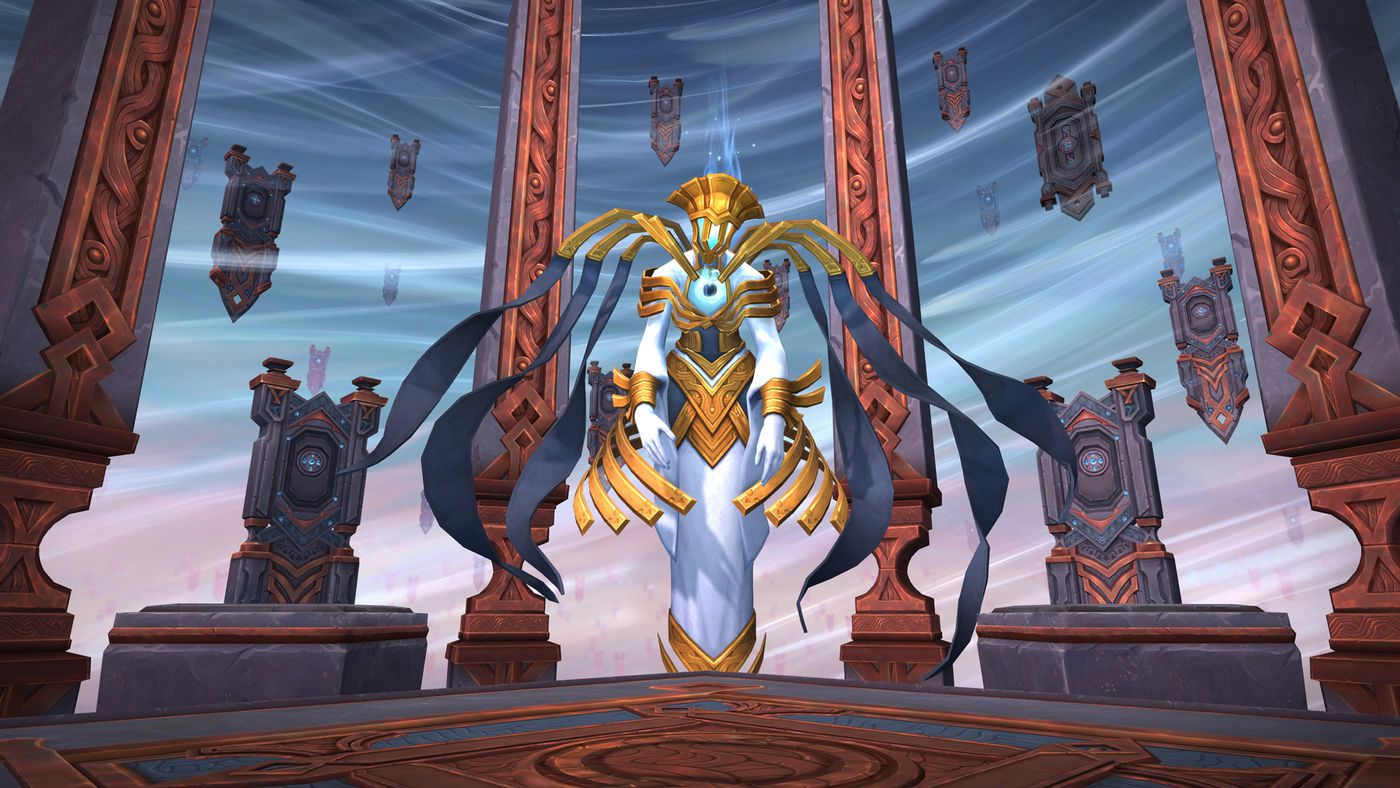 The most recent narrative chapters accessible on the 9.2 PTR begin to show how the Jailer destabilized the Arbiter in order to funnel souls into the Maw, linking events from many expansions together.

One of the early cinematics in Shadowlands depicts how the last Arbiter was damaged, enabling the Jailer to funnel souls into the Maw and start an Anima drought with significant ramifications, setting the stage for the events of Shadowlands. We discovered more about the Jailer’s intentions for weakening the Arbiter as the expansion continued, culminating in the Jailer regaining his insignia, which had been placed in the Arbiter, at the conclusion of Sanctum of Domination.

There has been no Arbiter to assess freshly arrival souls and send them to their proper worlds throughout Shadowlands, but in the latest Eternity’s End chapters, we attempt to establish a substitute Arbiter. To make a new Arbiter, we’ll need two things: a Vessel and a Voice. We gather the Vessel in Chapter 6 and then raid the Endless Sands in Chapter 7 in search of the Voice.

We begin the process of uniting the Voice and the Vessel after cleansing the Crypt of the Eternal, but the Nathrezim interrupt the ceremony (Acquaintances Forgotten) and inject the vessel with Argus the Unmaker’s soul—the essence of the Legion expansion’s final monster.

Everyone believes we’ve lost since the ritual has been disrupted—until Pelagos sacrifices his soul to repair the damage. The plot then progresses to the first cutscene, in which Pelagos bids Kleia farewell and takes the mantle of the Arbiter.

The hour has arrived, Saezurah. The corridors are no longer infected. A new Arbiter is on the horizon. Saezurah: The chorus begins to form. The ship is waiting for you. Your voice must be heard alongside theirs. Saezurah: Dissonance…a long-forgotten melody… Pelagos: There’s a problem with the ritual! Corrupter of the Darkseer: We’ve been waiting for this moment for a long time. The gamble of the Banished One has come to fruition… Corrupter of the Darkseer: Death has distorted a world-soul. A maul to smash the Arbiter with… Darkseer Corrupter: And now it’s coming for this ship! Argus will live forever!

Is it true that Argus shattered the Machine of Death?

The Argus the Unmaker was clearly part of the Jailer’s plot to destabilize the Arbiter, as we witness the soul used to actively hinder the process of making a new Eternal One in the quest conversation. However, in the Shadowlands cinematic, it is not expressly mentioned that Argus was the force that debilitated the Arbiter, and with all the twists and turns in the recent section, it’s impossible to make a definitive declaration without decisive speech. Nonetheless, there are several clues that clearly suggest Argus the Unmaker was the trigger for the machine of Death’s original breakage.

Many similarities between Argus and Death have been hinted throughout the years, most notably in the Jailer’s encounter, which contains a phase called “The Unmaking,” which sounds a lot like Argus the Unmaker. Death-themed abilities such as Death Titan Floating in Space Visual and Death Titan Test, as well as his ability Grasp of the Unmaker, which was initially dubbed Grasp of the Death Titan, were included in the Argus encounter. Argus makes many references to death throughout the confrontation, including one that echoes Sylvanas aspirations to put a stop to hope (“No hope. Just pain. Only pain”).

The Nathrezim were in alliance with the Jailer, professing to be allies with all other cosmic forces while covertly weakening them in service of Death—including the Titans (Order) and Burning Legion—as detailed in Shadowlands’ Enemy Infiltration – Preface (Fel). The Jailer may have wanted us to destroy the Burning Legion since it would vanquish Fel’s soldiers, jail Sargeras, hurt Azeroth, and dispatch Argus to weaken the Arbiter all in one fell swoop—pretty remarkable.

On Mythic level, Argus the Unmaker possessed unique red abilities, and the first Shadowlands cinematic depicting the Arbiter’s withering displays a vast red cosmic force crashing into the Eternal One. This hue, on the other hand, might be a nod to previous Legion bosses, such as Xavius from Emerald Nightmare.

The chronology of events is the only piece of evidence that goes against Argus the Unmaker. We know that Ysera was one of the last souls to arrive in Ardenweald before the machine of Death broke, but the timing doesn’t exactly square up since she died in early Legion and we killed Argus at the end of Patch 7.3.

We’ve now seen Argus’ soul used to keep the Arbiter from regenerating, regardless of the timeframe. What would it entail for the Shadowlands if Azeroth’s world-soul was corrupted and killed by the Jailer? Would it be the end of the Shadowlands? Zovaal will use targeted spells to destroy Azeroth, according to the Jailer’s Phase 3 datamining, thus we may be dealing with this problem very soon in Patch 9.2.

The “arbiter wow theories” is a blog that discusses the “Machine of Death”. The blog begins with the story of how the Machine was broken.