You are here: Home / Warcraft / Instruments of Death – Item References and Flavor Text in Patch 9.2 Sepulcher of the First Ones 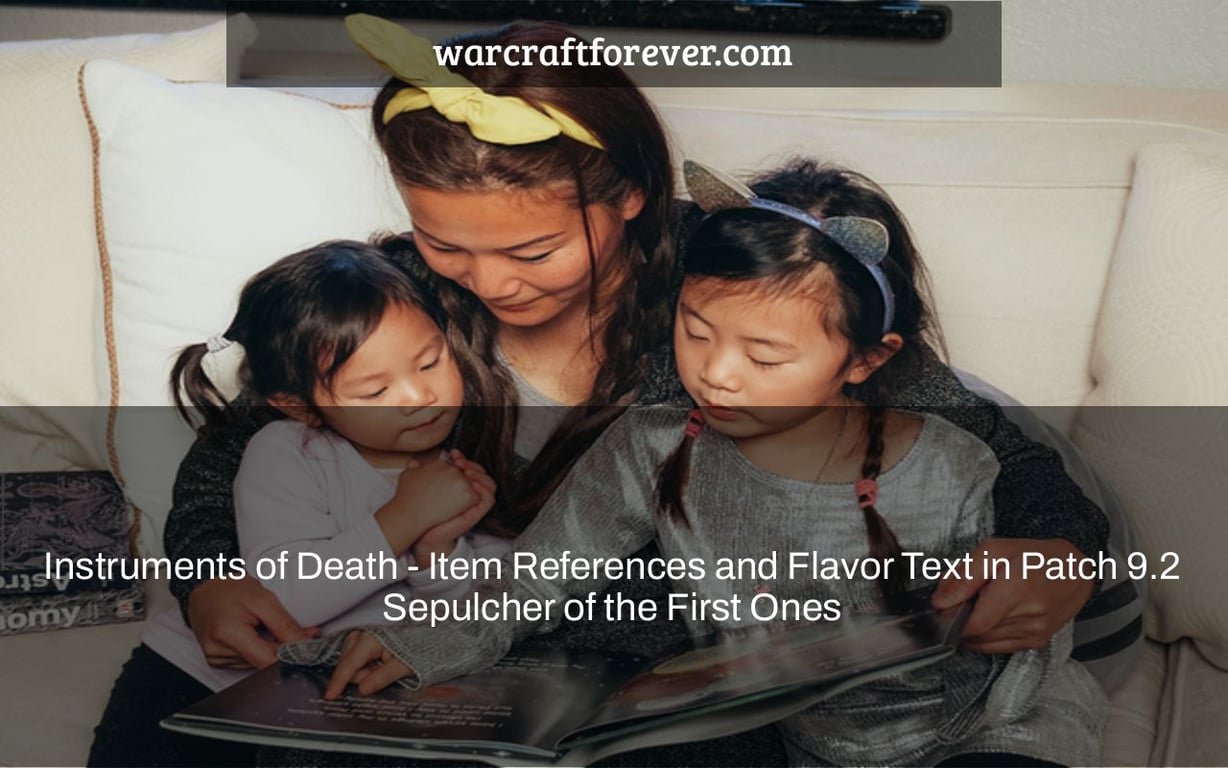 This is a blog post that provides an in-depth analysis of the items added to Patch 9.2 Sepulcher of the First Ones as well as their flavor text and item references.

We’re looking at some of the item references and flavor text in the forthcoming Sepulcher of the First Ones raid to help unravel the narrative of Eternity’s End and speculate on where our fatal encounter with the Jailer could go, following our analysis of unique items in Patch 9.2.

There Will Be Story Spoilers and Speculation!

Several objects in the raid make clear references to the Jailer, Zovaal. It’s no secret that the original arbiter of death had lofty plans for Azeroth, which are beautifully depicted in the flavor text, albeit the specific reason for Azeroth’s devastation has never been revealed. We already discovered that Frostmourne, the Helm of Domination, and, by extension, the Lich King were created in order for the Jailer to expand his reach into Azeroth in search of a hidden First Ones secret. We may now assume that the secret is Azeroth itself, the embryonic world soul developing inside the planet’s heart, thought to be more powerful than Sargeras and a danger to even the Void Lords… but also crucial to the Jailer’s quest to decipher the First Ones’ blueprints.

Aside from the Jailer, there are various more new and old character allusions. The Ruined Crest of Lordaeron most likely relates to Arthas, so there’s nothing new there, and we’ve already spoken about the Priest and Death Knight class rings gained from Anduin, but Rygelon’s Heraldric Ring raises an intriguing question. We know that Rygelon is a Constellar, and that he, like Algalon the Observer before him, is a celestial observer. But, unlike Algalon, who was commissioned by Aman’Thul to keep an eye on Azeroth for signs of Old God corruption, Rygelon’s allegiances are unclear – the dungeon journal says he was drawn to observe the events unfolding within the Sepulcher, but it’s unclear whether he was already watching the Shadowlands or simply wandering around, and the ring’s flavor text contradicts this. Rygelon seems to have served another master, and with all of the known titans occupied with Illidan and Sargeras, there is only one known player remaining on the cosmic stage: the Void Lords.

The Old Gods’ rulers stand in opposition to the Titan Pantheon, and although they’ve mainly stayed in the shadows, we know they have their own plans for the titan brewing inside Azeroth. Sargeras’ dread of Void Lord corruption drove him to rebel against his brother titans, founding the Burning Legion in a perverse effort to rescue the universe by destroying it – hunting the cosmos for embryonic planet souls to guarantee the Void Lords couldn’t infest them. While Sargeras’ objective made some warped logic, we now know that the Dreadlords corrupted him to suit the Jailer’s goals, sending the titan on a journey to destroy world souls with the sole goal of murdering Azeroth, albeit for a different cause.

The Jailer utilized Sylvanas to organize his escape via the events of Battle for Azeroth and Shadowlands instead of using Argus’ death, which was ultimately unsuccessful. There have been a number of in-game character theories about what will happen if the Jailer succeeds in his plans, ranging from the literal unmaking of reality to a new ordering of cosmology unbound by the balanced structure of opposing forces envisioned by the First Ones, but whatever the case, it doesn’t bode well for our world. While the world soul is unlikely to die outright, there have been hints that Zovaal may be partially successful in some way – inflicting enough damage to reshape the face of Azeroth or even awaken the dormant titan within, thereby giving players a narrative reason to once again focus on efforts at home and maintaining the eventual threat of Void corruption – because the Void Lords want to consume Azeroth, not destroy it.

Dealing with the Void Lords is unavoidable, and the Jailer’s actions may serve as the catalyst for eventually bringing them to light. Despite Warcraft’s chaotic narrative, there is a clear relationship between Argus breaking the Arbiter, Sargeras injuring the planet, Sylvanas arranging a massive war, the Jailer breaking free to assault Azeroth directly, and the Void Lords ultimately appearing. Of course, this is just guesswork, but we’ll undoubtedly discover more once Patch 9.2 is out.

The “sepulcher of the first ones tier sets” are a new item type introduced in Patch 9.2. They are similar to the old relic items, but with a different look and feel. The flavor text for these items is also slightly different from what was previously seen on relics.