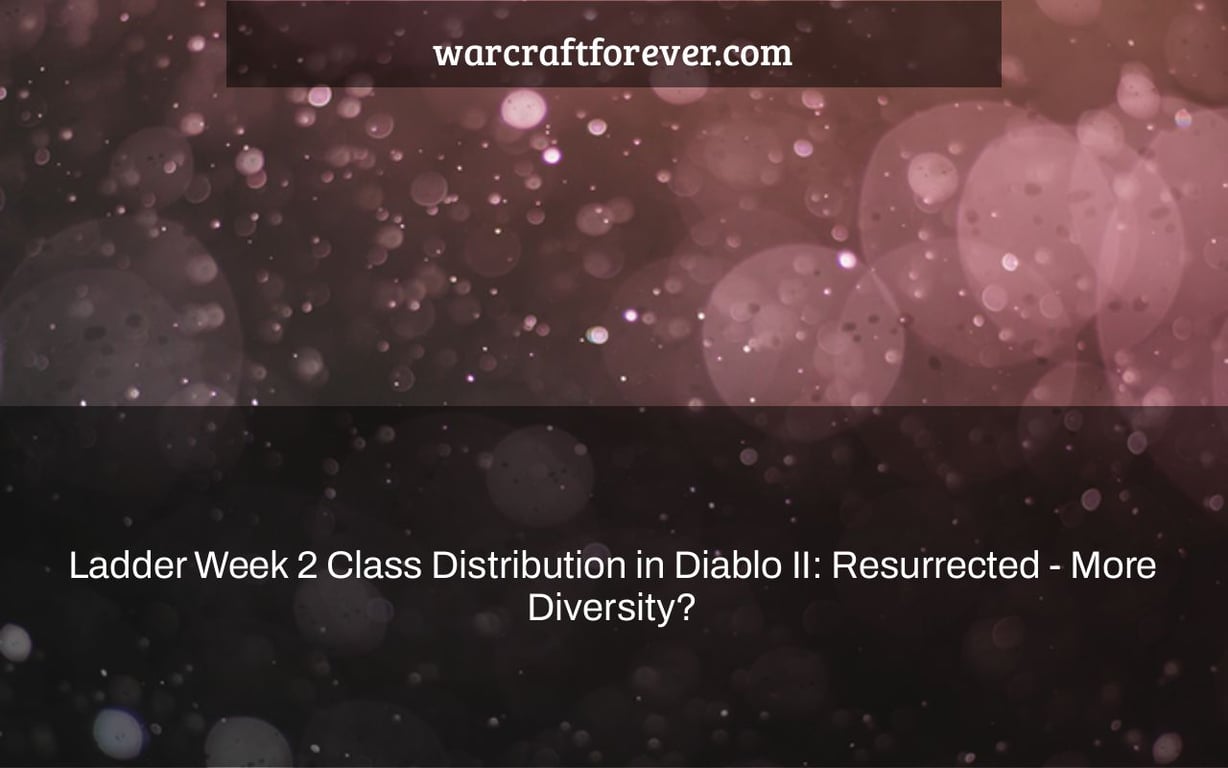 In Diablo II: Resurrected, the game’s developers implemented what is known as “ladder week” events where users can compete for better rewards. These events have been met with mixed reactions from players and critics alike who note that it fails to address the issue of balance in spawn rates among classes.

The “diablo 2 resurrected non ladder standard expansion” is a topic that has been brought up in the past. Blizzard has announced that they will be adding more diversity to their ladder system.

Week 2 of Diablo II: Resurrected’s first Ladder season is now over, and more characters are being generated on the Ladders than in the first week.

To acquire snapshots of server populations and class distributions, I generated one (barely) level 10 character for each class on the Expansion Normal ladder, since this is the quickest method to estimate numbers on the Ladder. I can obtain an approximate rating for each of the classes at this stage by looking at the ranking of the Level 10 characters I made. Because I wasn’t always able to reach Level 10 flawlessly, there’s a minor error margin of roughly 100 Level 10s, but I was able to get them out within a fraction of a bubble after they achieved their level. I also chose Level 10s over Level 1s for the obvious reason that it removes mule characters.

The D2:R Ladder is difficult to traverse, since it requires flipping through thousands of entries with just 14 shown at a time — getting to number 937,000 would take clicking through 68,358 pages. To the rescue, SorcTracker, DruidTracker, NecroTracker, and their ilk!

I’ve also opted to focus only on the Expansion Normal ladder, which accounts for more than 90% of Ladder activity. We will be able to better monitor general trends here.

In comparison to last week, we’re beginning to see some variety in the ranks. The following graph shows the relative percentage increases and one significant loss among the classes between Weeks 1 and 2:

As you can see, Sorceress (388,0940, 40.5 percent) and Paladin (246,546, 25.8%) are still in the lead, although Sorceress’ lead declined significantly after the first week (Week 1, 53 percent), while Paladins’ lead stayed relatively unchanged (Week 1, 24.3 percent). In some respects, this isn’t surprising; Sorceress and Paladin are both excellent classes for players looking to get their Magic Find characters up and running quickly, so it’s only natural that they’d be popular the first week and then fade by the second. The Sorceress’s large decline, on the other hand, was unexpected. Sorceress has always been a strong power in D2, but Ladder is also a period when players may want to try out other classes.

The Amazon (81,278) was the huge winner, jumping from fifth to third place on Ladder. Teo-Unsullied, the World First 99 Ladder character who plays the Lightning Javazon, is likely to blame for a lot of this. While Lightning Javazon has always been a popular class build, I doubt anybody expected the World First 99 to be anything other than a Paladin or Sorceress. It makes me pleased to see the Amazon class receive some of the love and respect it deserves.

Looking at the overall rankings, Sorceress and Paladin are still ranked first and second, which is unsurprising considering their clear dominance in the first week. Assassin is still in bottom place, with the poorest percentage growth of any class. Both Amazon and Barbarians rose enough to give the Amazon a two-rank jump and for the Barbarian to edge out Druid by a 0.1%, taking Barbarian from 6 to 5, but dropping Druid two places from 4 to 6. Despite their high numbers, Necromancers were downgraded from Rank 3 to Rank 4, most likely as a result of the World First 99 impact.

Will we see further modifications in the Ladder next week since that the novelty of the Ladder has worn off? While I don’t anticipate Sorceress and Paladin to be deposed from their thrones any time soon, it will be intriguing to see what cues other players will draw from their achievements to create their own.