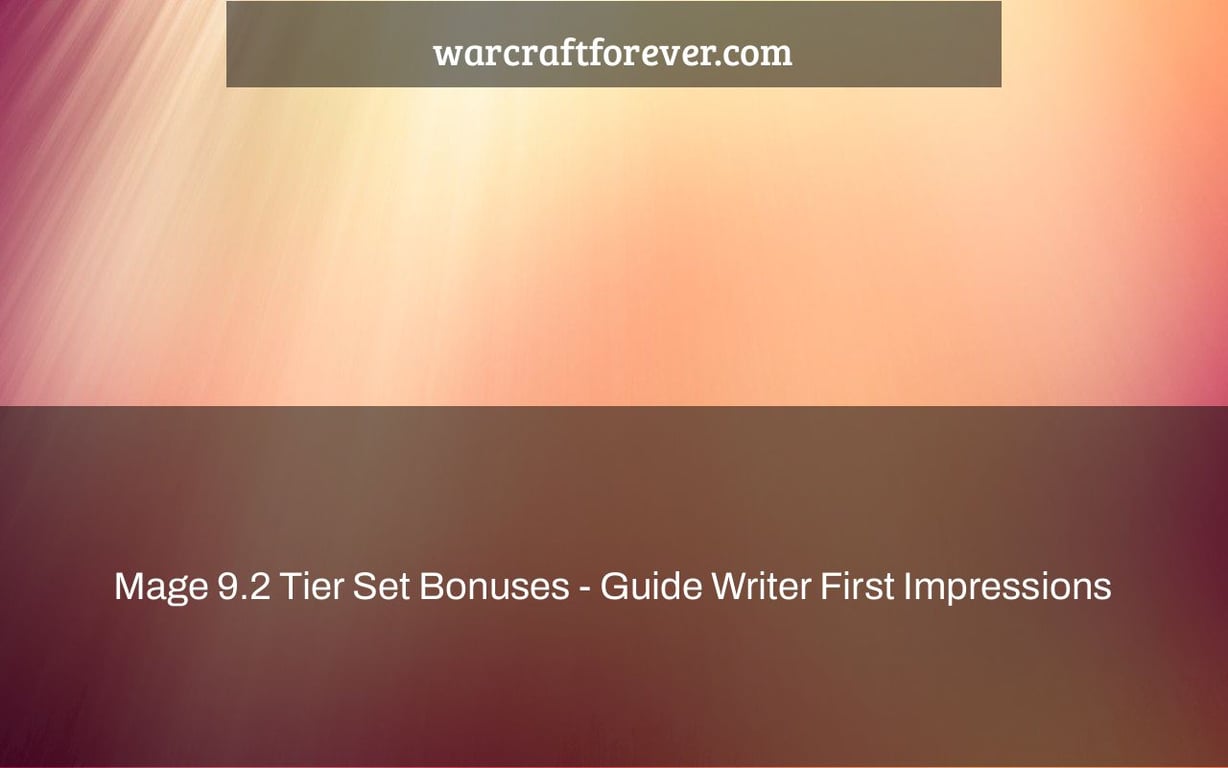 This is a guide that can be found on the official WoW forums.

The “shadowlands 9.1 fire mage nerf” is a recent change that has been implemented in the latest patch for World of Warcraft: Battle for Azeroth. The changes to shadow arts and fire magic were made with the intent of making it easier for melee players to deal with mages. 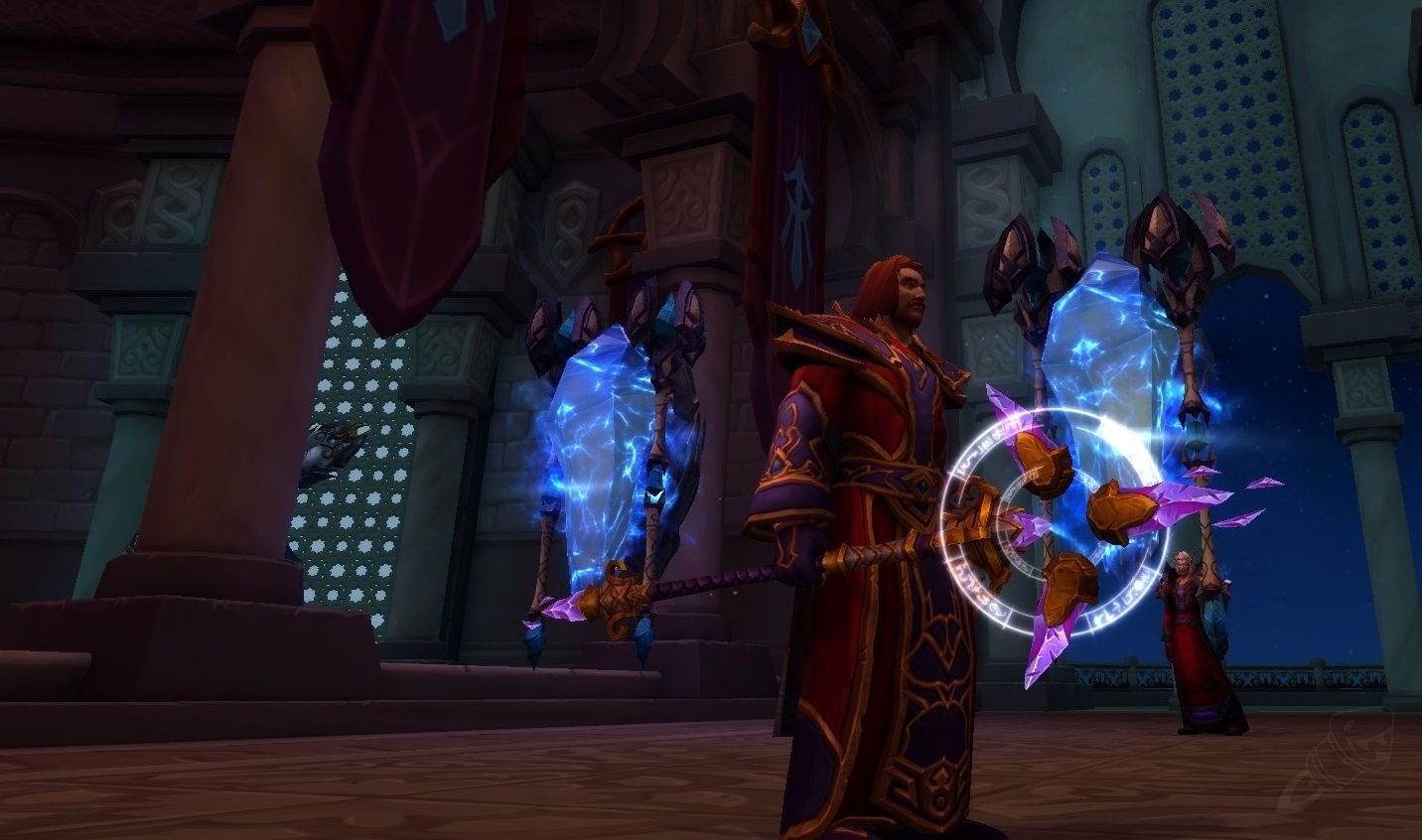 As part of the Shadowlands 9.2 Eternity’s End content release, Tier Set benefits have arrived on the PTR. Our Mage Guide Writers have shared their early opinions on these tier benefits, giving insight into the implementation, relative power, and even some important input, despite the fact that they are now untestable owing to PTR worlds being unavailable.

Porom (Arcane) and Preheat (Fire & Frost), two of our Mage Writers, have studied the freshly datamined tier set bonuses to provide a more in-depth look at how these benefits will likely effect their specifications in Shadowlands 9.2 Eternity’s End.

Arcane Mages have received their new set benefits for 9.2!

The first is a straightforward addition to our in-cooldown damage. It seems to be a respectable boost in damage (eight to nine percent), and although it isn’t a very fascinating bonus, it might have some gameplay ramifications when combined with the 4-Set. The 4-Set, on the other hand, is the more intriguing topic. Trying to quantify the 4-Set today would be futile since it might go in a variety of directions depending on how it is implemented in-game. With the covenant legendary effect baked in for Mirrors of Torment and the extra ranks of Arcane Prodigy for Arcane Power, 8 Clearcasting procs will take roughly 1 minute, which will be close to the cooldowns for Mirrors of Torment and Arcane Power.

If the free Touch of the Magi and the standard Touch of the Magi can be stacked, you’ll probably use the same reasoning as before, but you’ll want to cast both Touch of the Magis at the same time. If none of the aforementioned possibilities are true, this opens up a second, smaller cooldown window, which might be especially useful for Mikanikos in aoe because to the reduced Radiant Spark cooldown.

It’s essential to note that there are many more implementation scenarios outside the ones given above; I only wanted to present some instances to demonstrate the importance of the 4-Set bonus for Arcane implementation.

Overall, the tier sets as they stand now should give significant ST and AOE boosts, while the 4-Set will be significantly reliant on how it is used. Personally, I like how the set benefits highlight Touch of the Magi as a broadly beneficial spell. The possible limits of the 4-Set, on the other hand, do not appeal to me. There’s also a lot of flaky behavior in Clearcasting procs and abilities that interact with the buff right now, which is why I expect this set bonus to have troubles in that respect.

My current expectations are that the free Touch of the Magi cast will not need Touch of the Magi to be off cooldown, and that it will stack in some fashion, but I doubt Blizzard will let us to attain that level of burst. One suggestion I recently read that might help is to have Touch of the Magi reapply at a reduced duration after its explosion, or simply increase Touch of the Magi’s base duration. This would certainly help to alleviate the difficult theorycrafting ahead to determine the best uses for this set bonus proc.

Tier sets are making a comeback in 9.2! These benefits are divided into two halves, much as previous tier sets:

Fiery Rush increases our Phoenix’s Flames and Fire Blast recharge rate by 100% and offers Fire Mages a 2 second longer Combustion and an effect akin to Memory of Lucid Dreams. The addition of Phoenix’s Flames is wonderful since it means you can no longer use Phoenix’s Flames alone for Combustion. However, there is a catch to this effect: you are now burning for 2% of your maximum health per second. Overall, I believe the decision to have this advantage have a drawback is intriguing, but I’m not a big fan of sacrificing survivability for more damage if I can avoid it.

On its own, two seconds of additional Combustion time will have little to no influence on overall playstyle, but there are other factors to consider. As Fire Mages, our raid legendary is Sun King’s Blessing. It provides us with semi-regular micro Combustions and will substantially benefit from this tier set, since it dramatically enhances our Combustion uptime. Because this legendary may be used to prolong Combustion, the 4p is extremely likely to influence it. However, I don’t believe the additional seconds from the 2p will have an impact on this legend.

Depending on the setting of the basic profile, current estimates for this tier bonus range from 11 percent to over 19 percent. Keep in mind that this tier set increases the value of Sinful Delight, the new legendary that Venthyr Mages will be utilizing in addition to Sun King’s Blessing. This is significantly higher with Kindling. This is a historically significant gain for a set bonus, and it makes sense when you consider the drawbacks: Every second, 2% of your maximum health is consumed. With 62k health and a 33 percent uptime on Combustion, you’re taking an extra 24,540 damage each minute.

Overall, I believe this tier boost is good, but the fact that it kills your character is likely to be a point of contention. Fiery Rush shouldn’t scale with secondary metrics like Crit and Haste, or conduits like Infernal Cascade, but it’s too early to tell. Versatility should, in theory, just lower the amount of damage you absorb. This tier set heavily benefits Kindling in terms of balance, which means another talent row will no longer be a “option,” comparable to how Infernal Cascade improves Flame On. Almost all of the power of this tier bonus is also in the 4p, which means that collecting the set is practically all or nothing.

It’ll be fascinating to observe how these fixed incentives evolve over time. The concept of a powerful set benefit that hurts you appeals to me, but I’m not convinced by this design philosophy. Is the strength of this gain justified by the fact that it has a drawback? What happens when a set bonus has a drawback and one spec emerges as the obvious winner? If it’s nerfed, will they eliminate the disadvantage? I believe that although such effects might be entertaining, they are probably not good for the game as a whole.

Although this set bonus seems to be beneficial at first look, the present implementation of Comet Storm will create problems for it, since Comet Storm consumes the target’s Winter’s Chill stacks. This boost will only contribute for around a 5% damage increase for the 2 and 4 sets combined, assuming nothing is altered. This also assumes you have a superhuman response time when you witness Comet Storm in order to prevent chomping (losing stacks of the debuff without receiving its benefit) Ice Lances when the Winter’s Chill debuff is active during a proc.

We may anticipate an 8-9 percent increase in single target if this error is corrected and Winter’s Chill is no longer eaten by Comet Storm. This assumes that Comet Storm continues to benefit from Winter’s Chill despite not eating it. Still, this is a modest number, but it’s much closer to what I’d anticipate from a tier bonus. This increases to about a 13% boost in 5 target AoE, strengthening Frost’s reputation as an AoE specialist. That said, I don’t believe connecting this benefit to Icy Veins uptime is a smart idea since it reinforces Frost’s flaws by forcing downtime in battles or other disturbances such as needing to halt damage. The impression isn’t strong enough to stand alone. Even without the set benefit, modifying Comet Storm to no longer eat Winter’s Chill would result in more talent diversity in the 45 row, as it would overcome Splitting Ice in single target.

This set bonus has a high risk/low return ratio. It’s badly calibrated, interrupts regular gameplay by eating Winter’s Chill procs, and becomes more worse with low Icy Veins uptime due to forced battle downtime. It makes no sense to link it to Icy Veins, and I hope it gets reconsidered, along with Comet Storm Winter’s Chill interactions.

The “best m+ mage spec” is a guide about the new tier set bonuses for Mage in World of Warcraft. This guide has been written by a writer with no experience playing Mage. The writer has used the information from this guide to create their own build and give it a first impression.