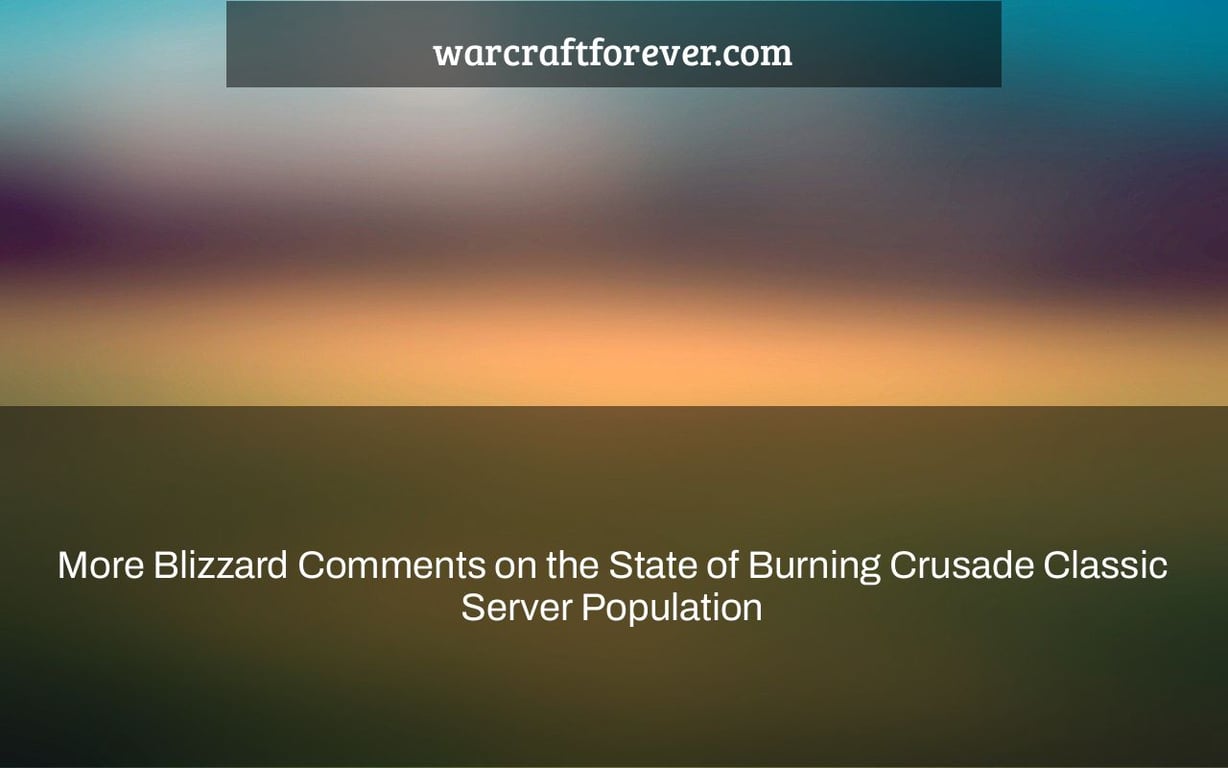 The Battle.net Classic servers have been offline for years now and Blizzard has not released any information about what their next steps are. Recently, Jeff Kaplan commented on the state of the server population in light of recent changes to make World of Warcraft more accessible for new players.

The “tbc classic server population” is a comment that has been made by Blizzard about the state of the Burning Crusade Classic servers. It seems like there are not many people playing on these servers anymore, but this may be due to the fact that they have been down for quite some time now.

Incentivize the lesser pop faction on a server to “want” to play on that server. You may have a reduced pop, but you still get “this.”

I can’t speak for the rest of the team, but I think this is a fantastic concept. We attempted something similar for pvp queues by giving the minority faction an unique prize for participating, but it wasn’t much, and I believe this concept might be expanded and developed further. We’ll keep talking about it!

This is a lot more delicate, and it’s sort of what I meant when I said we should be wary of notions that “directly hurts or lowers [players’] capacity to play the game.”

We did spend in building technology that would enable us to queue each faction separately, and we explored implementing it in Season of Mastery. The plan would have been to impose a set faction balance (say, 60/40) and then force queues on the dominant faction until the minority faction started to log in to compensate. We eventually backed away from this for a variety of reasons:

However, the effort we put in to do this is still there, and it’s something we could explore rolling out in a future season or classic release if we think we can do it in a manner that benefits more people than it restricts.

Allow only “to” the minority and “from” the majority to get free transfers.

Again, this makes a lot of sense intellectually. There are, however, a few things to consider:

Again, in my opinion, this is something that might work with some big limitations and variances from present World of Warcraft. What if this was just available to those on your friends list or in your community? What if this just applied to material that was instanced? These are a few items that could be interesting to investigate. It’s absolutely worth discussing more, but it’s something we’d have to think about for a long time.

A weekly brief multiple-choice poll regarding game direction and people’s views on changes like this is as easy to find as a weekly realm update blurb on the launcher.

So this is something the team has discussed extensively, and we have plans to study a mechanism to “poll” the community on certain themes while in-game. The current (half-baked) thoughts include something along the lines of an NPC somewhere in the world that asks players questions on hot button subjects, which they may respond to through a flavor text window (perhaps once per account, with some restrictions/requirements to ensure it isn’t overused). The replies we get may be able to assist us in making better judgments, or at the very least educate us about topics about which we’d want to have a larger discussion in this forum or in a live chat at some time. Regardless, the crew is enthralled by this concept, and we want to pursue it further!

Thank you so much for your intelligent suggestions and solutions. Please keep them coming!

The “classic wow server populations 2021” is a comment from the Blizzard community manager. The comment was in response to the population of Burning Crusade servers.

A: There is no answer to this question.

A: Blizzard is not confirming or denying Burning Crusade Classic at this time. However, there have been reports that the game will be a part of BlizzCon 2019.

A: Yes, the WoW Classic characters will be able to transfer in and out of Burning Crusade.