You are here: Home / Warcraft / New Blue Murloc Battle Pet – Rescue Gurgl from the Violetsail Pirates in Eye of Azshara 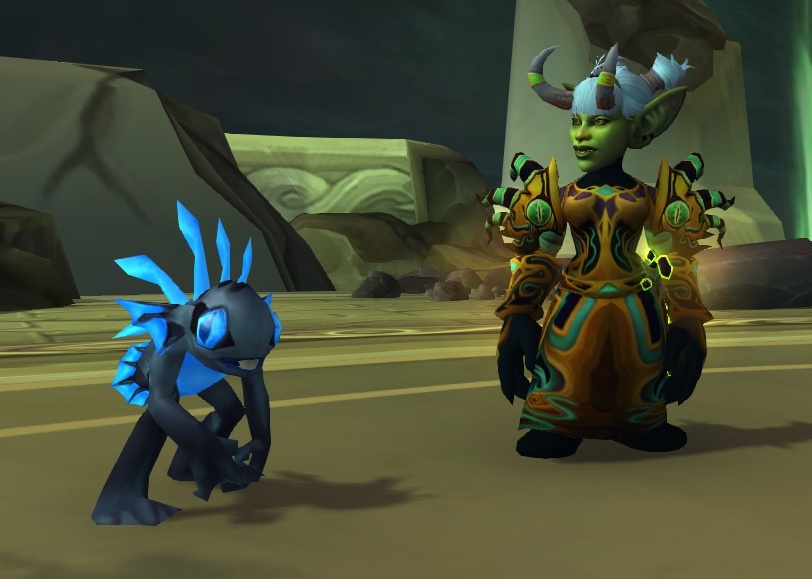 The latest addition to World of Warcraft, the newest Battle Pet in-game is what could be one of its coolest characters yet. Gurgl might not look like much but he’s got some powerful moves that make him a perfect fit for any player seeking an edge on their next encounter!

In Legion Dalaran, a new murloc pet questline has been uncovered! Breanni puts you on a quest to find pet-stealing pirates, and if you assist her, you’ll get Gurgl, a new blue murloc pet!

“Due to its invasive nature and diverse food, new varieties of murloc are found all the time over Azeroth.”

Gurgl is a tie-in to the new Murloc Funko released today as part of the Timewalker Mystery Box Bundle*, much like the last murloc pet added to the game, Glimr during the Shadowlands Pre-Patch!

* We’re a member of the Blizzard Gear Store affiliate program, so a portion of transactions made via the above link will help support the site.

You must finish a short questline involving the uninstanced Eye of Azshara zone and the Violetsail Pirates in order to gain Gurgl.

Pets Detective is the first mission in the series, which is delivered by Breanni in the Legion Dalaran pet store. Breanni claims she’s waiting for a delivery of pet supplies, but her supplier has vanished. You’re ordered to investigate about Dalaran with her beloved cat, Fiona, since she suspects foul activity, and you locate several spies in the process.

You discover of an organization called “Violet something” and its activities in the Eye of Azshara zone after some digging. When you return to Breanni, she informs you that the path of her pet supplier travels through the zone. You’re then ordered to Pet Up to heal her supplier, Zantini, and his two pets, the bird Stringfellowe and the tortoise Speedy IV, in the uninstanced version of the Eye of Azshara zone.

Fly to the island zone south of Legion Dalaran to access the uninstanced version of the Eye of Azshara instance.

When Zantini wakes up, he informs you that his delivery vehicle was shot down on the final leg of his journey. You utilize Speedy IV in The Coast is Clear to search for the dispersed pet supplies that were lost in the disaster. The vehicle Speedy IV has three attacks: a charge/stun, a speed boost, and a heal. When rushing across the beach looking for supplies, be aware that the crocolisks in the region can easily destroy Speedy! To get all of the missing pet supplies, use the stun to go past them.

When you return to Zantini with the pet supplies, he will inform you that the Violetsail Pirates are to blame for the accident and that you should pursue them in Paw Patrol. Kill pirates all across the island and use the keys they leave behind to rescue the rare pets they’re after!

All but one pet, the rare murloc Gurgl, has been retrieved, according to Zantini. He’ll say that Stringfellowe discovered a mysterious alcove where the Violetsail Pirates’ chief is hiding, and we’ll look into it in Gurgl and the Bandit. You’ll discover the leader, Iris Greedsway, and challenge her to a pet combat once you arrive. Her pets aren’t too difficult (though Pokémon enthusiasts will be amused by her initial pick!). and a mishmash of pets should be enough to take down her squad.

You may save Gurgl and return to Breanni in Dalaran after defeating Iris in combat! After the rescue, Gurgl becomes devoted to you, and Breanni offers him to you! Gurgl is a stunning murloc of a deep blue hue.