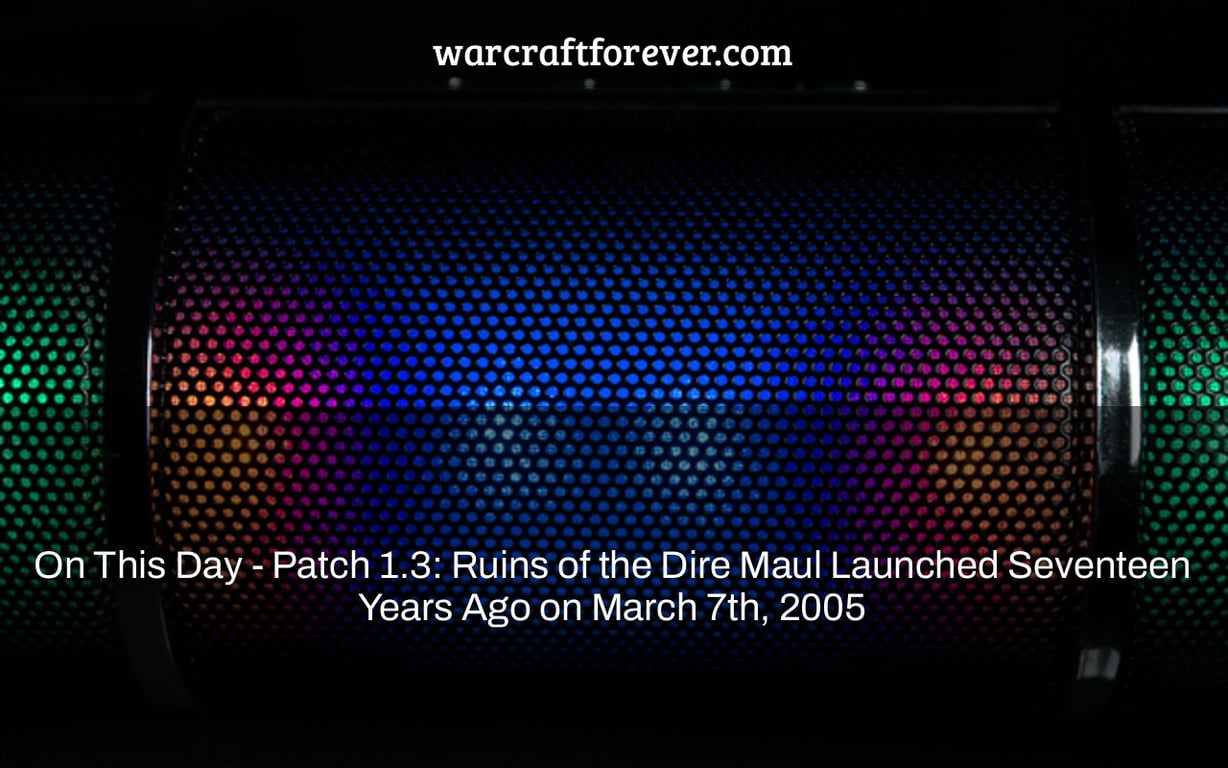 In 2005, Blizzard released the first expansion for World of Warcraft called The Ruins of Dire Maul. This was one of the biggest expansions at that time because it introduced many new things to WoW like elite dungeons and quests. Seventeen years ago today, Patch 1.3: The Ruins Of Dire Maul launched on March 7th!

On This Day – Patch 1.3: Ruins of the Dire Maul Launched Seventeen Years Ago on March 7th, 2005. “allakhazam wow” is one of the oldest sites for Warcraft players to find out what’s happening in the game and get help with their characters.

Patch 1.3.0: Ruins of the Dire Maul was published on this day in 2005. World of Warcraft has yet to get an expansion, and the game was very different from what we know now. As the game began to find its footing, a few things changed with Patch 1.3.

Dire Maul is a new dungeon.

I moved cautiously through Feralas’ lush foliage, getting closer and closer to the towering walls seen through the trees. I stayed concealed, careful not to tangle my feline form’s horns in the vegetation. The Gordok ogres stood there, their dark complexion standing out against the rich green of the forests.

The Sage had ordered me here to find out what had happened to Eldre’Thalas, the once-feared night elf vault of arcane secrets. The decaying, vine-draped walls were obvious testimony that the forest was reclaiming anything constructed within its grasp. Despite the green’s inexorable encroachment, the stonework remained practically intact in many places, demonstrating the craftsmanship that went into its construction. The night elves put forth a lot of work to keep the information inside its walls safe, and even more effort to maintain it safe. As I stalked the outskirts of Eldre’Thalas, watching Gordok squat on the ancient ruins, recalling the whispers of ghostly Highborn haunting the locked passages, and smelling the stench of demonic magic in the air, I knew that bringing the long-lost treasures of what is now Dire Maul to light would be a difficult task for even the most skilled of adventurers.

After finishing my reconnaissance, I turned around and returned to camp to ready my friends…

This ancient metropolis, built long ago by a secret sect of Queen Azshara’s followers, was utilized by these arcanists to secretly handle the Queen’s most essential requests. The Well has been destroyed for thousands of years, and Dire Maul’s three wings have been invaded by ghostly Highborn, demons, and ogres. Only the bravest adventurers are allowed to enter this dungeon and fight the ancient demons inside. — Dire Maul (Official Trailer)

Dire Maul was a completely new ogre-filled dungeon that was also the first five-player instance. The following features were mentioned in the official preview:

Raid Bosses in the Open Air

Two new Raid Bosses in the Open Air have been introduced to Azeroth. Azuregos, a monstrous blue dragon, has landed in Azshara, while Lord Kazzak the demon can be found in the Tainted Scar of the Blasted Lands. — Patch Notes: Patch 1.3

Stones Colliding are located outside of each dungeon to help players find a group to adventure with in the dungeon. The meeting stone will try to find you a viable five-person group by looking for a tank, a healer, and so on. As time passes and you are unable to find a group, the meeting stone will become less picky about who it groups you with. — Patch Notes: Patch 1.8

Nowadays Stones Colliding are used to summon party members, but back in the day they were the Dungeon Finder.

To restrict the amount of people who may enter a dungeon, all of them now have a group size limitation. This limit was essential since raiding these dungeons made much of the content simple. We can now look forward to greater loot being added to them in future content updates as a result of this modification. — Notes about the Patch: Patch 1.8

Imagine what dungeons would be like now if they could accept raid groups – this was a critical modification to keep group material hidden. The following caps were put in place:

There are a few more major additions to Patch 1.3’s list of new features:

Patch 1.3.0: Ruins of the Dire Maul may not be recognized as one of the best patches ever, but several of the mechanisms it introduced are still in use today.

On This Day – Patch 1.3: Ruins of the Dire Maul Launched Seventeen Years Ago on March 7th, 2005. The “allakhazam spells” is a website that provides information about all aspects of World of Warcraft and its expansions.