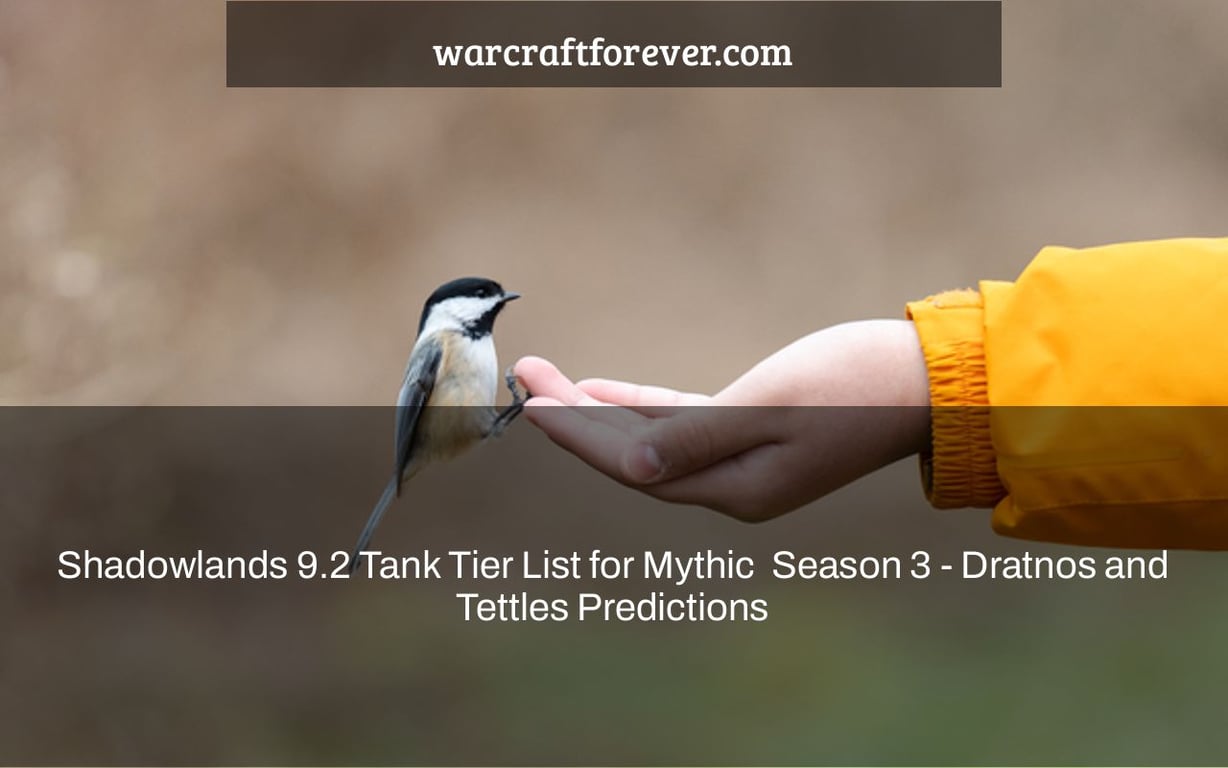 In the spirit of making a fun, informative blog and taking requests from community members on what to write about next, I bring you a big list with my personal ranking for tanks in Mythic+ Season 3. This will be updated as more patch notes are released.

Welcome to Dratnos and Tettles’ forecasts for Mythic+ Season 3 Tank Tier List based on Patch 9.2 Shadowlands. Based on PTR testing and current knowledge of the dungeons and Seasonal affix, they’ve produced some projections for Mythic+ in Patch 9.2, including the strengths and disadvantages of each Tank class as well as how each spec will perform.

For tanks, each tier is defined as follows:

Paladin of Defense has a phenomenal kit for Mythic Plus dungeons and is gaining a tremendous amount of value from the 9.2 additions. Their Kyrian build is durable and has damage for every single pull, and gains a fantastic second legendary Bulwark of Righteous Fury & Divine Resonance, while the set bonuses (Glorious Purpose & Glorious Purpose) are strong in almost all situations. They deal high damage on pull and can keep themselves alive through very high uptime on Ardent Defender at this point in the expansion. Paladin utility has a surprisingly high amount of applications in several dungeons as well, with Blessing of Protection and Blessing of Freedom handling several mechanics that can otherwise be quite painful. Paladins can also contribute to the healing of the group during the most stressful moments of healing-intensive bosses like the third boss of Sanguine Depths or the last boss of Plaguefall, where their Disease Dispel also adds value.

Brewmasters brings a set bonus that works very well in Mythic plus Breath of the Cosmos & Keg of the Heavens, amping up both their damage and healing by more than almost any other set bonus. They offer many tools to control pulls with Ring of Peace and Leg Sweep, and contribute some invisible damage with Mystic Touch. Though we expect them to be slightly less powerful than Paladin of Defenses, their excellent kit still warrants inclusion in the S Tier.

Tier Specs for Season 3 of Mythic+

Druid of the Guardian

Druid of the Guardian is extremely powerful in their Incarnation: Guardian of Ursoc cooldown and the set bonus Architect’s Design & Architect’s Aligner has enhanced this further. In dungeons where important pulls are large and spaced so that Incarn is available for all of them, and especially in dungeons where the filler pulls are not especially deadly, Guardian will be an exceptional choice. They also have the ability to play Venthyr’s Ravenous Frenzy which when coupled with Incarn they do massive damage. Holding them back from the S Tier is their relative weakness outside of their cooldowns, which can be managed with pathing and clever play but is still a notable drawback of the spec. Guardian works particularly well in the setting of PUGs and less coordinated groups, as the spec’s tools are fairly easy to get most of the value from.

Demon Hunter of Vengeance is a solid tank that provides a nice amount of damage (some of which, Chaos Brand, won’t show up on Details as theirs). They also have some unique tools for dealing with pulls in Sigil of Silence and Sigil of Chains, which make a few pulls much easier for groups with Demon Hunter of Vengeances than for those without. Their set bonuses Burning Hunger & Rapacious Hunger work well in Mythic Plus and provide a much shorter average cooldown on Fel Devastation this patch than last, which makes them much tankier on average. The spec is in B Tier because they are somewhat fragile against heavy sustained incoming physical damage, which becomes an issue as one pushes for Keystone Hero or Encrypted Hero, and they tend to need to overlap their defensives in order to survive, which means they eventually run out of buttons to press and are forced to kite.

Death Knight of Blood gains a fantastic set bonus Endless Rune Waltz & Endless Rune Waltz for Mythic Plus that synergizes very well with the Crimson Rune Weapon legendary to create a high uptime and very powerful Dancing Rune Weapon for most of the dungeon. This helps bring their damage out of the dumpster but fails to bring it up to the point of being a strength of the spec – those are instead their survivability and the Death Grip effects they have access to. If you’re looking for a tank that doesn’t rely on the healer, Death Knight of Blood is the choice for you, though if you play with damage dealers that like to burst on pull you may struggle to hold threat!

Warrior excels at deflecting oncoming autoattacks, which account for the majority of Mythic Plus damage. The other tanks, on the other hand, have generally caught up to Warrior’s tankiness in this area, although Warrior remains squishy against damage over time effects and magic damage that they don’t Spell Reflection against. The damage dealt by the Prot Warrior isn’t awful, but it’s no match for the damage dealt by the Paladin or Brewmaster. Warriors’ unique crowd control value from either Spear of Bastion or Ancient Aftershock, which will be amplified after they wear their covenant legendary, is a strong piece of utility.