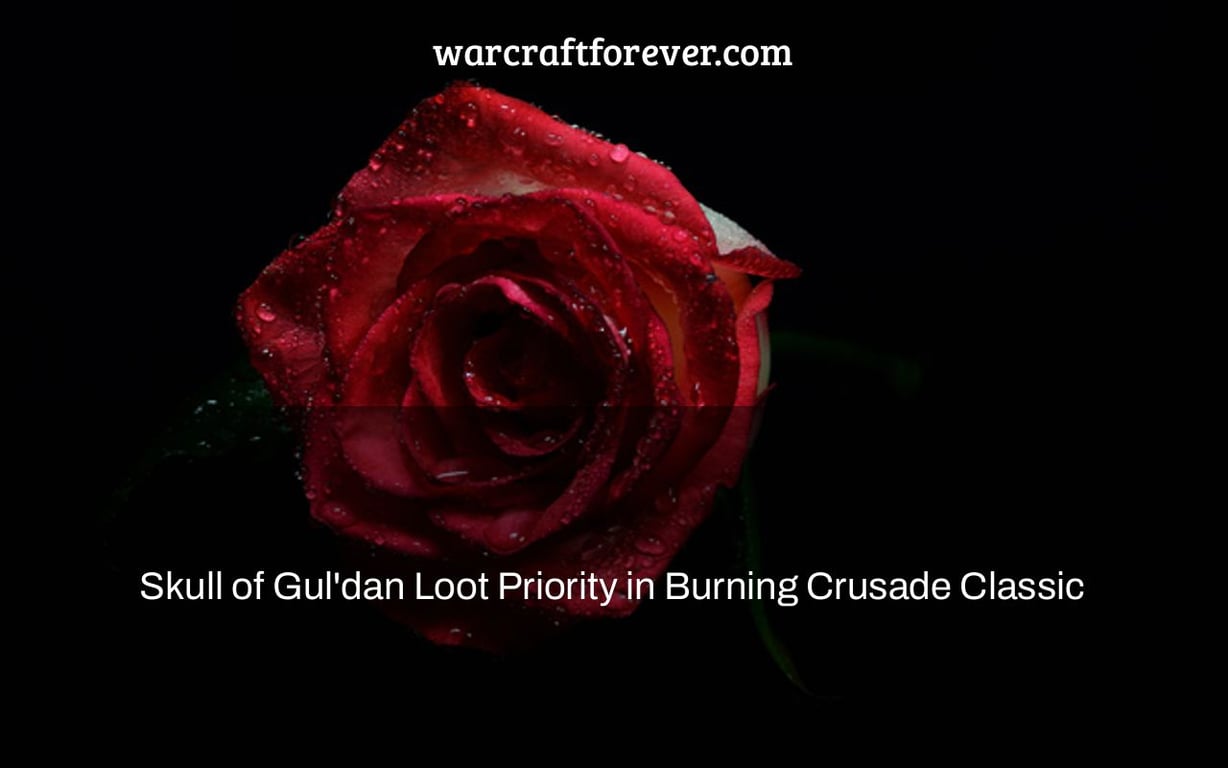 In World of Warcraft: The Burning Crusade, Gul’dan’s skull is an item that grants the player a significant amount of power and damage. Blizzard has patched in hotfixes to reduce its priority as part of their design philosophy for this expansion.

The “skull of gul’dan tbc” is a quest item that is obtained by defeating Gul’dan in the Black Temple. The item can be looted from his corpse, which will drop it as soon as you kill him.

Gul’dan’s Skull was a powerful demonic item crafted from the orc sorcerer Gul’dan’s skull. Its abilities were eventually swallowed by Illidan Stormrage, who used them for a variety of demonic activities ranging from creating portals to corrupting the trees of Ashenvale. The skull, albeit weakened, still has power and is in Illidan’s control (for now).

ViciousBambi deserves credit for this.

How uncommon is Gul’dan’s Skull?

Illidan Stormrage drops the Skull of Gul’dan. The good news is that the drop rate is rather high, particularly when compared to things like the Azzinoth Twin Blades. According to client tracking, the drop rate has been roughly 14% thus far. This is over three times the legendary’s drop rate, and we only need one. This indicates that the majority of us who desire a skull will get one sooner or later.

Which class is the most benefited by Gul’dan’s Skull?

The relative advantage of each item in the game will be determined by the item being replaced as well as the performance of the players/class. It’ll be hard to do this across many classes and for everyone’s unique raid setup/performance. However, by making certain assumptions, we can provide a reasonable baseline from which we can assess the benefits of providing skull to different groups, and eventually determine which class will gain the most.

Fortunately for us (and me, as the author of this tutorial), all of the comparison has already been done. A committee of class leaders and class dissension representatives worked together to determine what the loot priorities should be. They’ve done so for the majority of the contentious phase 3 artifacts, including Gul’dan’s Skull. This theorycrafting took place on the Egalitarian Discord, and the conclusion of it all can be seen in this spreadsheet put together by Louki.

The spreadsheet shows the relative DPS performance of different gear setups and the difference compared to a baseline best setup. These values are derived from different simulation tools created by the wow community as a whole. All these simulations have been carried out with similar settings. These are based on being Alliance (so +1% hit for everyone thanks to Inspiring Presence) and assumes ideal but realistic groups: Shaman of the Elementals/Druid Boomkin/Warlock, Mage/Priest of the Shadows/Restoration Shaman. Furthermore, the simulations include aggressive consumable usage (e.g. Dark Rune, Jewelcrafting necks) and short kill times (<2mins). 2-minute sims put 2min-CD trinkets at their theoretical worst, a good player will be able to capitalize on 2:20-2:30 fights and push double trinket usage, while a worse player will only get one use out of skull. More details about the exact sim settings used, and the reasons behind them can be found in the spreadsheet.

It’s important to remember that simulations are just that: tools. They’re mathematical approaches to in-game performance. This implies that the numbers shown will always be skewed. Not everyone plays as well as a simulation thinks, not all battles are created equal, and not all raid setups/performance are the same. Furthermore, multiple simulation tools are used, each of which has its own restrictions or models, resulting in relative values that are not necessarily the best for cross-class comparison. This isn’t to say the findings aren’t right; it just means we need to consider them in context. It provides a foundation to build from and is the finest tool we’ve found so far for prioritizing gear based on data rather than gut instinct. Let’s move on to the actual findings now that the technical disclaimers are out of the way. Who is the rightful owner of the skull? The trinket may be used by six different classes, in no particular order:

The amount of use they can make of the static hit rating and how well they scale with the haste from the on-use effect will determine how helpful Skull is for each. Let’s take a look at each of these classes and see what the ramifications are. Because the Horde does not have the 1% hit chance from Inspiring Presence, the advantage from the hit rating on Skull will be greater for them.

Paladin of Defense Paladins are the odd duckling on the list and not covered in the spreadsheet, so let’s get this out of the way first. The Skull of Gul’dan is the best threat trinket available for Paladin of Defenses, but only by a small margin. The closest threat alternatives are Mark of the Champion, Darkmoon Card: Crusade, and Eye of Magtheridon (with 25% uptime). However, the biggest benefit for paladins is the spell hit rating. Most of a paladin’s abilities are spells, which in turn requires spell hit to well, hit. This mostly comes into play when Paladin of Defenses are main tanking. Reducing your chance to miss will increase consistency when pulling.

Mage The good news for mages is that they already have a variety of powerful trinkets; the “bad” news is that although the skull is their new greatest trinket for phase 3, it will not endure the duration of the expansion. Hex Shrunken Head + Ashtongue Talisman of Insight is almost as excellent as The Skull of Gul’dan + Ashtongue Talisman of Insight, and Shifting Naaru Sliver will be the go-to in phase 5. Shifting Naaru Sliver’s cooldown coincides precisely with Arcane Power’s cooldown. Another factor that works against Skull for mages in later stages is the amount of haste available on gear; for arcane mages, this means that meeting the GCD haste limit for Arcane Blast becomes a major worry.

Druid Boomkin The Skull of Gul’dan is the second-best upgrade overall for boomkins right after Zhar’doom, Greatstaff of the Devourer. It lasts until Naxxramas in Wrath of the Lich King, and they don’t get into any issues with reaching GCD, so it can be combined to heart content with cooldowns. The only thing you can say is that Warlocks gain relatively more from Skull due to having slightly more throughput. This is going to be highly dependent on the individual performance of the raiders and is about a marginal difference to begin with.

Shaman of the Elementals Next up are shamans. Shaman of the Elementalss love The Lightning Capacitor, so it should come as no surprise that their technical BiS setup is a combination of The Lightning Capacitor and The Skull of Gul’dan. The thing however is that the gain compared to going from Quagmirran’s Eye or Sextant of Unstable Currents to skull is smaller compared to the gain from some other classes. This comes due to two reasons; First, the best setup for Shaman of the Elementalss is high on hit rating, making it harder to utilize the hit rating on skull. On the other hand, shamans and especially Troll get close to GCD cap for Chain Lightning during the use of Bloodlust and Drums of Battle. This causes the need to postpone the use of your trinket and not get the additional benefit from stacking cooldown + trinket usage. However, the consolation is that once Zul’Aman is out that Hex Shrunken Head is a close alternative compared to Skull.

Warlock Last but not least warlocks, for them The Skull of Gul’dan is a significant step up compared to the other available trinkets. It will last them till the end of time (of the expansion) at least. To make the most out of the hit rating on the trinket some planning might be required seeing as most phase 3 caster loot is riddled with hit rating. However, in later phases caster gear gets a bigger focus on haste instead of hit, making this a non-issue. The remaining question is how well warlocks scale with haste. And boy, do they scale. Warlocks have no issue running into breakpoints or reaching the global cooldown with their spells when combining the haste effect from skull with Bloodlust, along with the main portion of their DPS coming from filler spells that scale with haste. Looking at The End Result from the spreadsheet we can also see that warlocks gain the most in this phase and going forward from having the trinket.

Who Should Get Gul’dan’s Skull?

It goes without saying that loot distribution takes into factors more than just who earns the highest theoretical DPS.

Loot distribution is influenced by a variety of factors, including personal performance, attendance rate, other loot preferences, DKP, being the guild master’s sweetheart, having the greatest gold offer, and so on. However, assuming everything else is equal and the limits of simulations are taken into account:

Keep in mind, and I can’t emphasize this enough, that this is just based on the theoretical DPS boost, with nothing else taken into consideration. I’d want to express my gratitude to the Egalitarian Discord. lologarithm, Egregious, Louki, Ryusei, Twizzles, Ceridwyn, Juff, Cjblue, Walther, and Linelo are a few examples.

The “skull of gul’dan trinket” is a quest item that can be found on the dead body of Gul’dan in Black Temple. The item will increase your priority for loot in the instance, and it’s also a great way to get some extra gold.