You are here: Home / Warcraft / Tier Sets Drop Chance from the Great Vault on 9.2 PTR – Observations and Remaining Questions 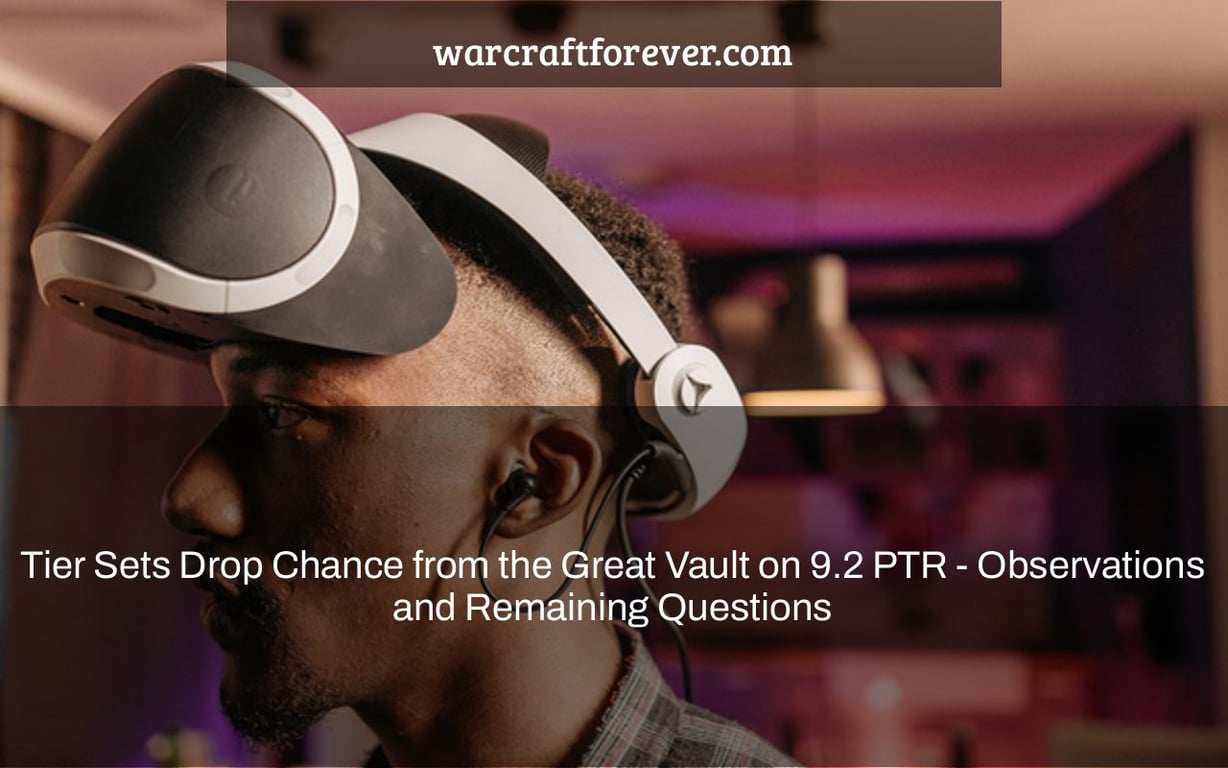 Tier Sets are now dropping from the Great Vault on 9.2 PTR, but we still know very little about exactly what is going to happen with them and how they will interact with other items in Battle for Azeroth as it moves forward. You can read more about that here: https://www.forbes.com/sites/chuckjones/2018/01/28/battle-for-azeroth-naxxramas-tier-sets/. Here’s a list of questions you may have at this point:
1) What happens if I get a tier set drop?
2) If someone else has a piece of Tier Set gear equipped, do their stats take precedence over mine?
3) Are there any restrictions or limitations on what players can equip differently than others who haven’t yet obtained these sets?

The “Tier Sets Drop Chance from the Great Vault on 9.2 PTR – Observations and Remaining Questions” is a blog post that discusses observations of the Tier Sets drop chance in World of Warcraft: Legion. Read more in detail here: the great vault shadowlands.

Disclaimers and the Method of Data Collection

We used the PTR to estimate what the drop probability of Tier would be in Patch 9.2 since Blizzard did not release the actual drop chance of Tier in their Tier Set FAQ earlier today. Blizzard, on the other hand, is the only one who knows the precise drop probability, and this is only an estimate.

A Brewmaster Monk was used to gather data, and just one box in the Mythic+ row was used. If the drop probability varies depending on the kind of material, or if there are other boxes in the same row, this data will not support it.

Furthermore, since this was tested on the PTR, it is possible that this may alter in the future.

We acquired 12 pieces of Tier Gear after opening the Great Vault 200 times on the 9.2 PTR, which comes out to a 6 percent Drop Rate for this slot. Based on the sample size and observed drop chance, the drop rate is most likely between 3% and 10%.

We got the following:

We’ll continue with a 6 percent drop likelihood from the Great Vault based on this information. Here are some conclusions drawn from the data:

First and foremost, every piece is possible.

According to the aforementioned treasure, the Great Vault may potentially drop Tier Pieces from any monster in Sepulcher of the First Ones, even bosses you haven’t slain yet (was done on a character which did 0 raid testing). This implies that during the start of Mythic Week, the Great Vault may grant you a Tier Chest or Tier Shoulders, things that you won’t be able to access until this week since these bosses aren’t available until then. If you have the other three pieces, this might give you a 4-set right away.

The following are the other two items we’ve confirmed:

Question 1: Does Tier have an independent chance?

According to our research, a Tier piece has a flat probability of replacing a regular item in the Mythic+ row or being added to the total loot pool.

In the Mythic+ loot table for 9.2, there are 91 potential items for a Brewmaster Monk, putting the estimated drop probability at 5.2 percent, which is close to the observed 6 percent. While it’s conceivable that Tier pieces are simply added to the pool, this would mean that the chances of rolling a piece in the Raid (36 pieces of gear) or PvP (37 pieces of gear) rows would be much greater than in the Mythic+ row owing to the overall amount of drops. If Tier loot is merely added to the pool, Mythic+ rows in the Great Vault will see almost three times as many pieces of Tier as Raid and PvP rows.

The information might alternatively be read as a flat (6%) probability of replacing the item in that box with a Tier component.

More testing with a Raid Vault or a PvP Vault is needed to see whether each slot has an identical probability of dropping Tier across all three rows, or if Tier is just added to the loot pool.

Unknown questions that we’ll need to answer include:

Chances of Getting Tier in Vaults Estimated

We now see two alternative implementations of tier in the Great Vault based on the data. Here are some graphs to help you understand the data: the % likelihood of receiving at least one tier item based on the data above.

Assume that a Tier item drops at a fixed rate of 6% from any slot in the Vault. The percentage likelihood of acquiring at least one Tier Piece (of any sort) is as follows:

Even with a full Vault, you have a 42 percent chance of seeing at least one Tier item in your Great Vault if this implementation holds true.

Chance has been added to the pool.

Let’s assume that Tier is added to each row’s potential drops. Using some frequent examples, here’s the percent probability of acquiring at least 1 Tier Piece (of any sort) from Brewmaster drops (91 Mythic+, 36 Raid, 37 PvP).

If this implementation is correct, you have a 60% chance of seeing at least one Tier item in your Great Vault if you have a full Vault.