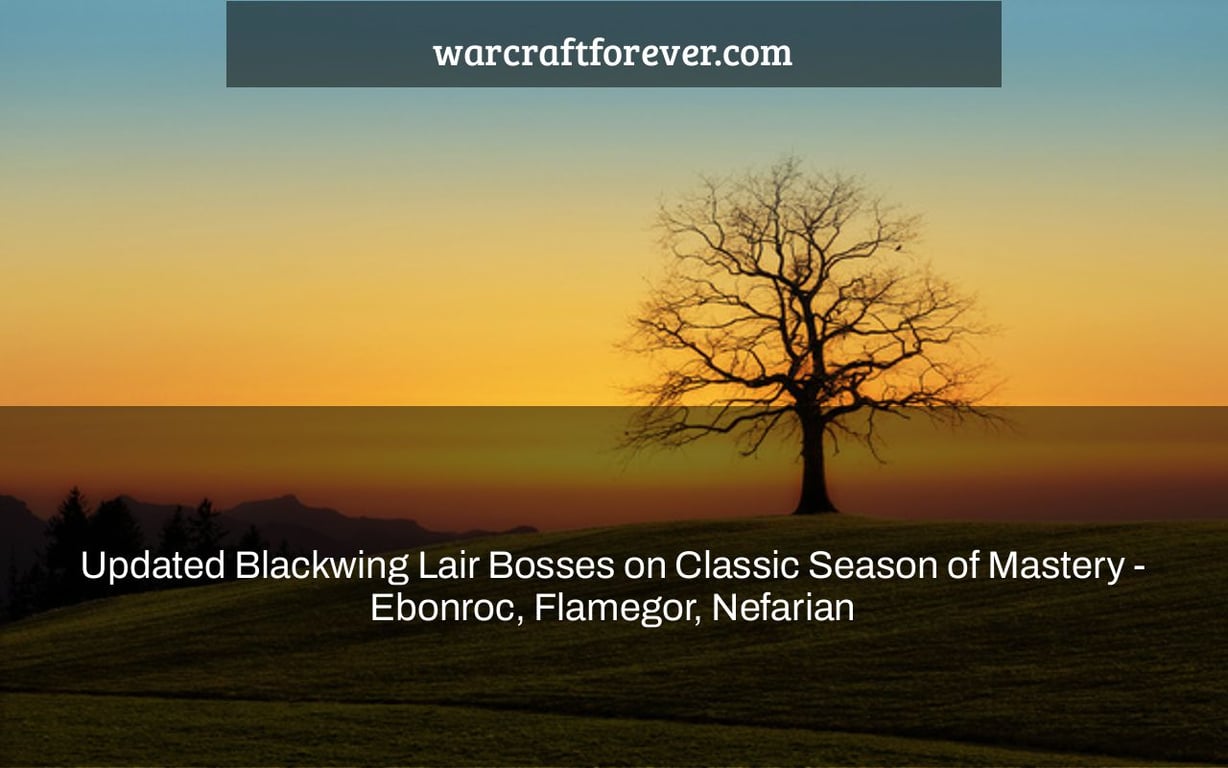 Blackwing Lair is one of the most difficult bosses in World of Warcraft. In order to make Blackwing Lair easier on casual players and reward those who want a challenging fight, Blizzard released updated versions of the three original bosses in Blackwing Lair – Ebonroc, Flamegor, Nefarian. The update also contained new loot for each boss as well as increased difficulty levels compared to before.

The “blackwing descent shadowlands” is a new area in the Blackwing Lair that will be released with the Classic Season of Mastery update. The bosses inside this new area are Ebonroc, Flamegor, and Nefarian.

The revamped Blackwing Lair from Season of Mastery will be released on Thursday, February 10th, with completely new boss battles and features. Blizzard has completed patching all bosses in the recent PTR release, which Wowhead previously covered. We’ll be looking at Ebonroc, Flamegor, and Nefarian today.

On Nefarian, all the Class Calls are made at the same time! If this ever occurs to you, you WILL DIE!

The new Ebonroc and Flamegor mechanism is rather unique, as both monsters will band together and act in a similar manner to the smaller Four Horsemen. Ebonroc casts Brand of Shadow on a regular basis, while Flamegor casts Brand of Flame, which does damage as your debuff stacks grow.

To make things worse, killing one Drake too fast would enrage the other, necessitating the Drakes being killed approximately at the same moment. If you’ve played Four Horsemen before, you’ll be familiar with this new encounter, as your healers and tanks will need to be assigned to a rotation to guarantee that each boss has a tank and some heals.

Some tanks will be in “reserve,” waiting out of range of both debuffs and ready to intervene if necessary. Finally, melee damage dealers may take advantage of the Wing Buffet by exploiting the knockback to fast move to the other Drake after they’ve accumulated four stacks of the debuff.

Nefarian is exceedingly tough, since the first thing you’ll notice is that the adds spawn extremely rapidly during the add phase, wiping out raids that aren’t prepared. The battle plays out similarly to the last Nefarian encounter, with the exception that each class call has been greatly enhanced to perform some unexpected things.

The first thing to keep in mind is that the new area effects persist considerably longer than typical class calls, so you’ll often see two or even three class calls going on at the same time.

Call to the Druid Class

During the Call to the Druid Class, Druids will still be put in Cat form like normal, but Nightmare Brambles will spawn on the ground and roam around. If these Nightmare Brambles touch a player, they will be rooted and take nature damage over time. The Nightmare Brambles debuff can easily be dispelled by a Cleanse and isn’t much of a problem. However, it can become a problem if other class calls are up simultaneously.

Call to the Hunter Class

The Call to the Hunter Class will destroy the ranged weapon like normal, but will also spawn copies of the Hunter’s weapons that cast Corrupted Shot on the raid. A target reticle will appear somewhere and a brief moment later, a giant red laser will fire outward. This gives players time to avoid the damage from Corrupted Shot. This is the highest damage dealing class call, by the way (average hits range from 800 to 1400 damage).

Call to the Mage Class

During the Call to the Mage Class, Mages will cast Wild Polymorph like normal, but wands will also appear that cast Arcane Explosion over and over. The damage dealt from this effect isn’t that much (350) but it does have a knock back effect, which can interrupt casting and cause the fight to get a bit hectic.

Call to the Paladin Class

The Call to the Paladin Class will cast Improved Blessing of Protection on Nefarian just as before, but there will also be swords that cast Consecration all around the room. These have very large areas and deal about 200 damage per tick.

During Call to the Priest Class, Mind Flays target players.

Call to the Priest Class

The Call to the Priest Class will cause Corrupted Healing like normal, but also spawn shadow orbs that cast Mind Flay on nearby players. Players will need to move away from this as quickly as possible, even while slowed, and potentially get a spot heal or two. If this spawns near the tank, melee will likely just have to move out.

During the Call for a Rogue Class, Corrupted Weapons assault players.

Call for a Rogue Class

The Rogues will be transported in front of Nefarian, as usual, requiring the tank to turn the boss aside to protect the Rogues from Cleave damage. Meanwhile, replicas of the Rogue’s weapons will sprout as Corrupted Weapon, which will cast Corrupted Weapon. Corrupted Weapon is a 50 yard range spell that gives shadow damage to the person it is cast on.

During the Call for Shamans, a bouncing bolt appears.

The Call for Shamans is fairly unique in comparison to other class calls, Bouncing Bolt will spawn and bounce around the room. Anyone near the bouncing bolt when it lands will receive the debuff Pulse Lightning, which does the following “Inflicts Nature damage to nearby enemies every 1 sec for 15 sec. In addition, movement speed, attack speed, and cast speed are increased by 30%.” With this debuff, players will deal damage to nearby allies with Pulse Lightning, which bounces to additional players like Chain Lightning.

From Twitch user iamdltn’s viewpoint, Corrupted Coils during the Call to the Warlock Class

Call to the Warlock Class

Warlocks will produce shadow orbs that cast Corrupted Coil in random directions that move slowly, making it the most intriguing class call of them all. To avoid receiving damage from the effect, players must “bullet hell” dance between the coils. This damage isn’t much, just roughly 300 damage per coil, but seeing it for the first time is thrilling.

Call to the Warrior Class

Finally, Warriors, like Rogues, will go into Berserker Stance and cast clones of their weapons as Corrupted Weapons. Charge and Corrupted Slam are the two abilities of these Warrior weapons. The Corrupted Slam is a three-second spell that stuns the target for two seconds. These weapons may also deal 800 damage in melee.

Blackwing Lair is the final dungeon of the Classic Season of Masteries. It was released on September 27, 2018. The final boss is Ebonroc, Flamegor, and Nefarian. Reference: blackwing lair final boss.