You are here: Home / Warcraft / Warcraft Arclight Rumble: My Impressions 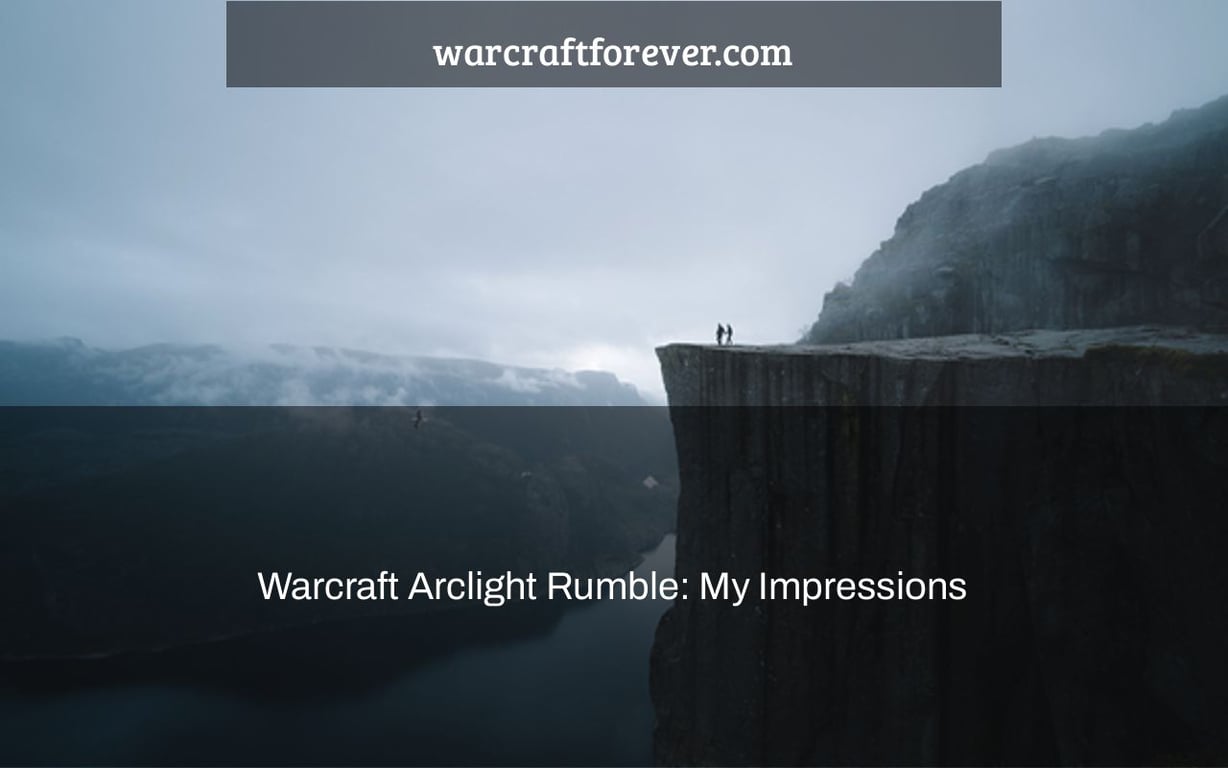 The latest expansion to World of Warcraft introduced a new 5v5 arena PvP mode that is free-to-play and has been in the works for years. It’s also massive, with tons of content including heroes from across Azeroth.

The “warcraft game” is a new hero brawler that has been released for the Warcraft universe. I have spent some time playing and am here to share my thoughts on this game.

As a result, the first Warcraft mobile game, Warcraft Arclight Rumble, was announced. Obviously, it was received with a great deal of hostility and disapproval, which can be loosely divided into three primary beefs (all of which are, in my opinion, unjustified):

TL;DR: I enjoyed what I saw in general, and for the first time in recent years, I felt buzz and excitement with Blizzard, although with a grain of salt, of course. Let’s get into further detail.

First and foremost, the aesthetics and mood. It’s no secret that various game genres all tap on our early IRL gaming memories and act as a kind of replacement for them. Strategy games, in particular, are alluding to real-life toy army fights, and Blizzard takes it a step further by creating its characters to seem like toy soldiers. This is really close to my own tastes, so I can’t say no – in fact, it’s one of the most appealing aspects of their new title in my opinion. A clear “yes” would be chibi-fied versions of well-known characters and units, created in a youthful, joyful, and trademark (yes, trademark) Blizzard style.

Second, there’s the genre. I’ve never played Clash Royale or anything like that, but I’ve played my fair number of tower defense games, and I like them when they’re done correctly. Because you don’t have to micromanage as in a true RTS (which is difficult to do on a mobile phone, to be honest), a few strategical touches after making a choice works well for a mobile game. The gameplay, however abrupt as demonstrated in the presentation, is dynamic, the objectives are simple, and you aren’t required to control hundreds of systems. So far, they’ve kept things simple and amazing while yet requiring some talent, understanding, and competence. What I’m trying to say is that tower defense (or rather, tower offense) is a good fit for mobile gaming because it emphasizes strategy rather than speed or precision, and it has a lot of potential for variety, complexity, and expansion when it comes to zones, maps, units, campaigns, factions, and so on.

Finally, there’s the lore – or rather, the lack thereof. It intentionally lacks the mythology of previously recounted or ongoing storylines, and although clearly catering to the Warcraft fandom, it does not require new players who are unfamiliar with the brand to dive too deeply — they can just download and play. Obviously, with a mobile game of this kind, this is a necessary, and it was handled nicely.

Fourth, it supports many game modes, including campaigns and (most likely) random/selected AI matches for solo gamers like myself, as well as PvP and competitive content for organized groups and/or friends, ensuring that it caters to every imaginable player base.

Fifth, there’s an RPG aspect – some call it grinding, but I call it a method of replayability. Leveling up your characters is a tangible objective that provides motivation for even routine battles, giving you a dopamine boost every time you reach a new level.

What about the grain of salt now?

The main source of worry is an undefined monetization approach. I believe it is reasonable to assume that it will not be a pay-to-win game, and that the basic version will be available for free. However, a lot of content will undoubtedly be concealed behind microtransactions — and it will almost certainly include heroes and/or model skins. Obviously, some fundamental heroes will be accessible to anyone, but you won’t be able to sell a-very-cool-elf as you could, say, Sylvanas. That is, story relevance will always outweigh the coolest drawn no-name character with the greatest skills, therefore Blizzard will be forced to bury a large number of narrative characters behind a wallet wall.

The second point to mention – it’s a personal one, but it’s significant – is that internet connectivity will very certainly be necessary to play the game, even during single-player sessions or campaigns. I generally play mobile games on the road — lengthy car/train/subway rides – where the connection is usually poor, flickering, or non-existent. This is one of the reasons I dismiss the vast majority of mobile games in my life – in fact, I’m only playing one of them right now, the match-three puzzle Cradle of Empires, which doesn’t require an internet connection to run smoothly or at all – it only checks for updates at launch, and is essentially an offline game. I believe that having access to the internet would be required not just to play matches with other players, but also to store your progress to the cloud and other features. That’s a common affliction in most mobile games, and I doubt they’ll even consider treating it by making at least some gaming options accessible offline.

Finally, there’s the issue of complexity. Again, this is my personal gripe — after testing Hearthstone, I immediately discovered that you can’t simply play a random battle and have fun. You must study and practice hundreds of cards and gaming styles, as well as devote yourself. It’s a choice between keeping your game basic (which permits casual enjoyment but bores loyal players who are constantly wanting more) and growing it, adding heroes, troops, and spells until a new random player can’t join and have fun since there’s so much to learn. It’s usually the second road in a mobile game, and I don’t believe servicing casuals or following both pathways is an option.

I’d love to be proven incorrect! It would be fantastic if a casual single player could level up, gain new heroes, and continue through the campaign at his own leisure while while receiving content updates and advancement. But, as usual, I believe Blizzard will prioritize PvP and dungeon/raid group content, so I’m bracing myself for the worst.

To cut a long tale short, I would absolutely give it a go, as would many others, even the gamers who dislike/grumble about it. Expectations are dwindling (is it a Pokemon game?). Is there a mobile Classic? WAR is going to become a given and something we’ll have to live with, and it seems fun enough to attract its own audience, whether or not it’s a Warcraft player base. To put it clearly, it seems to be a joyous entertainment, and if done well, it has every opportunity of being another title worth playing. Only time will tell whether this is true.