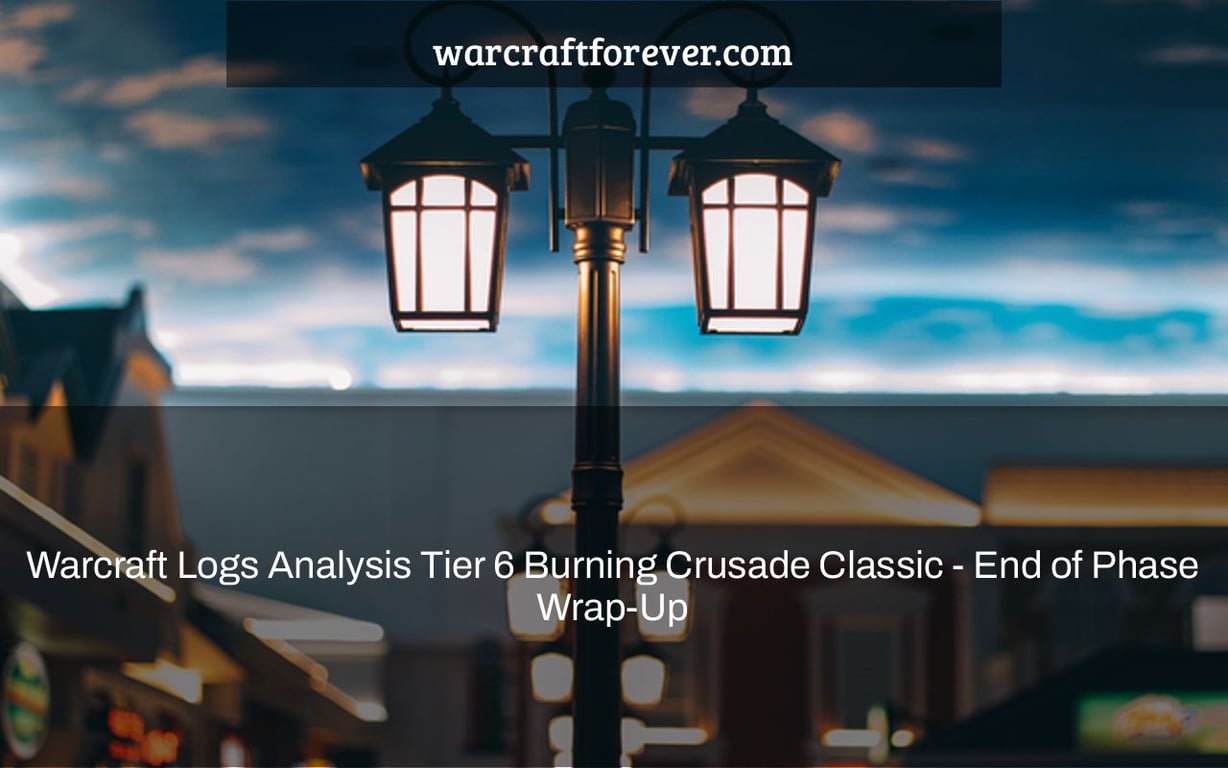 This analysis will conclude my Tier 6 Burning Crusade Classic log. It has been a journey of over 1,000 days and I have seen the rise and fall of many different things in that time. This is not necessarily an end-all for me with this game – it was just what came to pass on my server when we got there.

The “warcraft logs season of mastery” is a series that analyzes the progression of a player’s Warcraft Logs data. This article will cover the end of Phase 3 and the start of Phase 4 for an individual player.

We can now reflect back on class performance in the expansion’s last raid tier, Black Temple and Hyjal, now that the expansion’s final phase has arrived. While still very powerful, Arcane Mages have lost their invincible status in Tier 5. Warriors and Rogues have risen to the top of the leaderboard in terms of boss damage done. Hunters and Warlocks are still the most powerful boss damage classes, with Hunters slightly edging over Warriors at the 95th percentile. We utilized data from the Warcraft Logs Statistics pages for Black Temple and Hyjal, obtained on 5/10/2022 for both Phase 3.5 and Phase 4, for this investigation.

The data for DPS ranking is taken from the Warcraft Logs Black Temple & Hyjal Statistics Page for the 95th percentile. There are a few things to take into consideration before we delve into the data:

Boss Damage in Black Temple and Hyjal Phases 3.5 and 4

While Fury Warriors performed well in tier 5, it wasn’t until tier 6 raids that Combat Rogues’ true potential was shown. Both of these classes started off poor in the Burning Crusade Classic and have since scaled up with better gear at a quicker pace than other classes, propelling them to the top of the rankings. Arcane Mages, Destruction Warlocks, and both Survival and Beast Mastery Hunters are still the favorites of the whole expansion, with highly respectable outputs.

Unsurprisingly, the legendary weapons Warglaive of Azzinoth are very strong, giving any Rogue or Warrior who obtains them a significant edge in terms of damage output. The top ten rogues in Black Temple for Rogues for boss damage are all double-Glaive rogues. Eight of the top ten Warriors are double-Glaive players with one single Glaive, while one Warrior in the top ten has no Glaives.

The top 100 boss damage rankings in Black Temple include 60 Hunters, 24 Warlocks, 8 Warriors, 5 Mages, and 3 Rogues among all classes. The top 100 players are all raiders who focused their raid on boss parsing and, in most instances, bolstering certain individuals. They aren’t necessarily typical of the performance of ordinary raiders in normal raids; rather, they are some really amazing instances of what can happen when you push this game to its limits!

In Phases 3.5 and 4, the top 10 boss damage players for Black Temple

Black Temple and Hyjal, both tier 6 raids, include a total of 14 monsters with a broad range of skills. In terms of sheer damage output, there are certain encounters that benefit some classes over others. Azgalor is one of the most extreme instances of a monster that heavily favors physical damage dealers, while Supremus’ risky mobility and volcanoes favor ranged casters. Such stark differences in class effectiveness for various bosses promotes a more balanced raid composition, a far cry from Classic raids, which were dominated by Warriors – the expansion’s unquestioned rulers.

With outstanding complete clears in just 51 minutes 14 seconds and 52 minutes 40 seconds, they hold first and second position amongst their alliance and horde guilds. Third place is close, but fourth is a minute behind third and fifth is another minute behind fourth, which is a significant margin in the world of speed runs.

Noobs uses a well balanced raid composition in both alliance and horde raids for these runs. Three Warlocks, three Mages, three Hunters, and three Warriors make up their damage-dealing core. Enhancement Shaman, Retribution Paladin, Balance Druid, and Shadow Priest are among the buff and support characters. Two tanks, one Feral Druid and one Protection Paladin, and three Restoration Shaman, one Discipline Priest, and one Holy Paladin on the healing team. It’s encouraging to see such a well-balanced raid composition succeeding at such a high level of competition!

For many players, Sunwell is a fresh raid and a new experience. In comparison to previous raid levels, the difficulty has been greatly increased in Burning Crusade Classic. To beat these bosses, players will have to face a significant challenge and adapt their strategy and potentially entire lineups.

The proportion of total boss health and total trash enemy health is a significant variation between Sunwell and prior levels. Because there was so much trash in previous levels, there was a lot of focus on trash damage for fast clears, but Sunwell is the first raid with higher boss health than trash health. This implies that although having a high level of garbage damage is still vital, it is less so than in prior raids. When it comes to deciding which players to bring, boss damage is much more crucial than trash damage for raid parties attempting to move through the raid.

Sunwell offers the legendary bow Thori’dal, the Stars’ Fury to Hunters, just as Black Temple provided the extremely strong Warglaive of Azzinoth to Warriors and Rogues. Any Hunter who is fortunate enough to get this bow should anticipate a significant increase in their damage output. I expect hunters to quickly take the lead in damage caused once they get their hands on this.

Right present, the damage rankings for Sunwell are fairly similar to those for Black Temple, with Rogues, Hunters, Warriors, and Warlocks all vying for the top spot, and Mages behind the pack by a hair. We’ll have to wait and see how the massively strong Sunwell Plateau equipment affects these rankings, and which classes will benefit the most. We can only speculate for the time being, but I’m looking forward to seeing how things pan out in the Burning Crusade Classic final raid tier!

Simonize has been a Rogue since Vanilla, the Burning Crusade, and Wrath of the Lich King. He is the inventor of two rogue damage modeling spreadsheets, one for Classic and one for The Burning Crusade, and is mostly focused on PvE. You may join Simonize’s Discord or follow him on Twitch and Youtube if you like his work.

The “tbc logs” is a tool that allows users to analyze Warcraft Logs. This tool was used in the “Warcraft Logs Analysis Tier 6 Burning Crusade Classic – End of Phase Wrap-Up”.