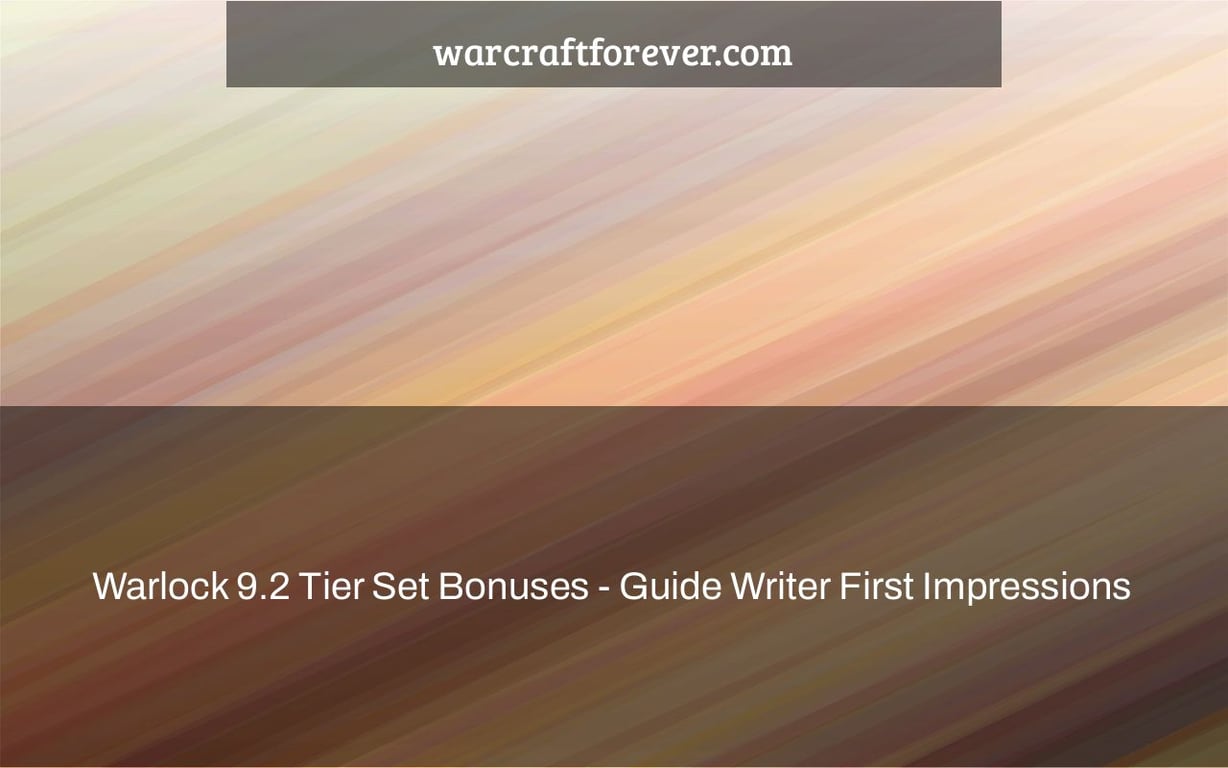 The 9.2 tier set is the first time we’ve seen a full new gear tier since Cataclysm, and there’s one thing I really wasn’t expecting: it’s all purple! Warlock has never been known for its bright colors, so what explains this? Well, actually my guess would be that in Patch 9.3 we’ll see us get some blue sets too – the Legion expansion will introduce two brand-new classes into WoW and there are already hints about an attractive blue mage class coming to us soonish (who knows if you might even get your own personal cool spell!).

As part of the Shadowlands 9.2 Eternity’s End content release, Tier Set benefits have arrived on the PTR. Our Warlock Guide Writers have shared their early views on these tier benefits, giving insight into the implementation, relative strength, and even some important input, despite the fact that they are now untestable owing to PTR worlds being unavailable.

Warlock of Affliction First Impressions of the Author

Our Warlock Writers, Xyronic (Affiliation), NotWarlock (Demonology), and Loozy (Destruction), have studied the freshly datamined tier set bonuses in order to provide a more in-depth look at how these benefits will likely effect their specs in Shadowlands 9.2 Eternity’s End.

At first sight, the 9.2 tier set bonus for Affliction Warlock seems to be quite promising. I’m not shocked to see it revolve on Malefic Rapture, given that it’s the specialization’s primary nuke, despite the fact that it’s still severely nerfed since its Castle Nathria days. In reality, this set bonus will have little impact on how Affliction works; on both multitarget and single target, you’ll still use the same priority list of skills. To avoid losing procs, you’ll want to cast Malefic Rapture anytime Calamitous Crescendo procs.

I’m not sure how powerful Affliction will be with the set bonus right away – first impressions are promising, but I still believe Affliction will struggle on single target. Perhaps Affliction’s propensity for scaling well during expansions will show through, but we won’t know for sure until we see early PTR testing.

Guide to the Affliction Warlock

Demonology seems to be brimming with Soul Shards due to the present implementation of both tier benefits. When the Dreadstalkers fade, the 4-set provides us a Soul Shard on every proc, while the 2-set offers us an additional stack of Demonic Core. We now have a big surplus of Demonic Cores and Soul Shards, making it difficult to avoid overcaping on any of these resources. Thankfully, this has little effect on Demonology’s gameplay other than making you feel pressured to consume all of your resources. With Dreadlash, From the Shadows, and the conduit Carnivorous Stalkers, there is some synergy between the tier bonus and our skills, where you receive increased AoE from Dreadlash and extra proc chances from Carnivorous Stalkers and hence From the Shadows.

Both enhancements are fairly strong in terms of relative strength in all scenarios, since Malicious Impact offers you damage in both single target and AoE situations, and you don’t have to pick. There’s still some debate about whether the Malicious Imp will operate as a Guardian like our present Imps, adding to Demonic Consumption, or if it won’t. Some preliminary studies indicate that the Imp’s abilities deal Shadowflame damage rather than Fire damage, as indicated by the set bonus tooltip, suggesting that there may be some extra interaction with From the Shadows that has an impact on skills.

The major issue with both of these set bonuses is that they both have the potential to boost Demonic Consumption’s worth even more than the other alternatives in the level 50 talent tier, despite Nether Portal’s buff. Overall, these set bonuses are intriguing and give enough variation to the standard to satisfy the majority of players. There’s still a lot to learn about the 4-set and how it all works together, which will decide a lot of its strength. However, things are looking well, and you can anticipate to use your Demonbolt key a bit more now that you have the tier.

Guide to Demonology for Warlocks

When casting Chaos Bolt or Rain of Fire with the 2-set bonus Herald of Chaos, you have a 20% chance of making the following cast of the other one free. The 4-set bonus makes Chaos Bolt or Rain of Fire, which may be freely cast, summon an Infernal for 8 seconds. This is an intriguing pair of goodies that complement one other well. It’s still too early to tell how strong this benefit is, since there’s some uncertainty over whether the Infernal spawned from the 4-set will also proc Rain of Chaos. This extra intrigues me right away, as it offers some variety to what you cast. This will affect all sorts of content, but will be substantially stronger on cleave and AoE due to the fact that Rain of Fire and Infernals damage scale with multiple targets.

This seems to be a significant boost that will also make the spec a lot more fast-paced and enjoyable to play. In the end, the strength of the benefits will be determined by the Infernal’s uptime, the proc chance, and whether or not the proc will have an internal cooldown. I believe it’ll be an intriguing bonus to experiment with, and it’ll make Destruction Warlock more enjoyable to play, as long as it doesn’t get nerfed from the initial released numbers.