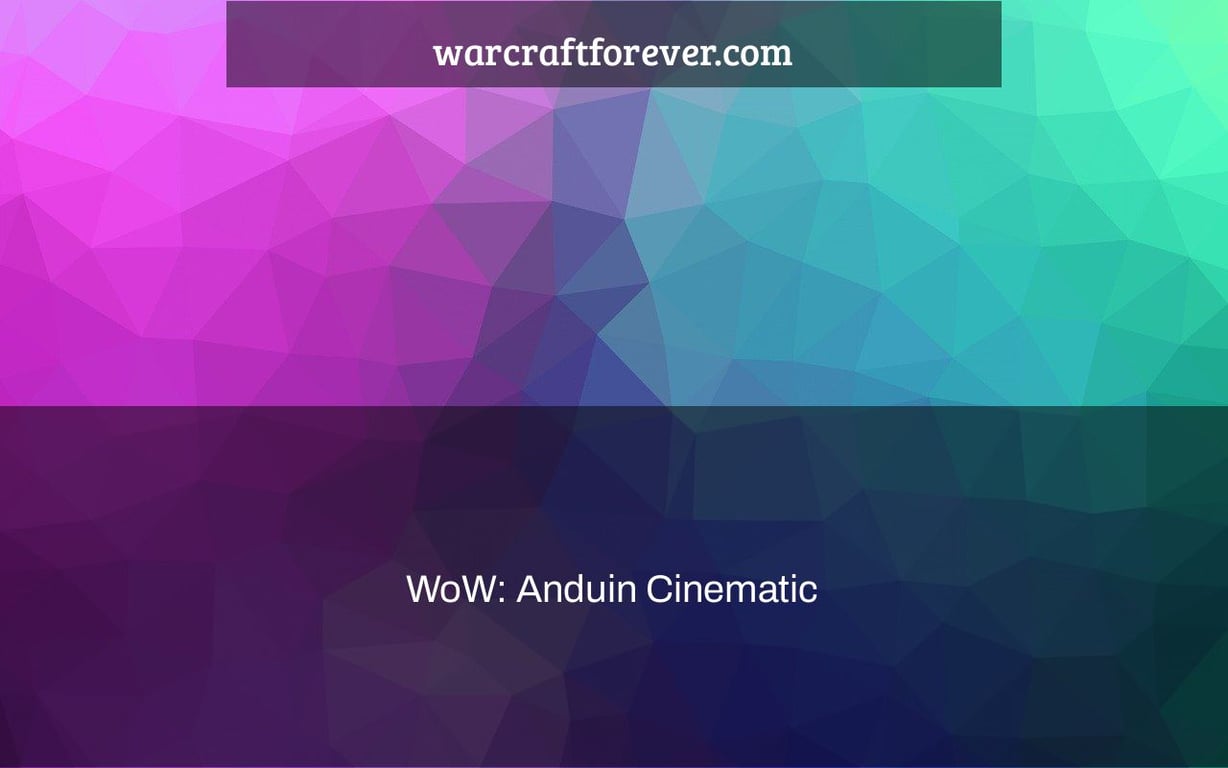 The latest cinematic for Warcraft is a gripping, engaging piece that left me with goosebumps. It captures the essence of its characters in this difficult time and I can’t wait to see what comes next from FFXIV!

The “new wow cinematic 2021” is a new cinematic that will be released in 2021. It will feature Anduin and the Horde. The movie will also be released on PS4, Xbox One, and PC.

Games are more essential than ever to me now – in this world of lunacy, and I don’t mean it in a poetic way, with no control over events, it’s necessary to divert your focus to simple, everyday things, to have some plan, to perceive and implement some reason and justice – even if it’s a virtual world.

I’m not sure how long it will endure – as I previously said, corporations all around the globe are now competing to see who can impose the most personal sanctions on Russia. As I wrote before, in certain aspects it hurts not the warmonger, but people – for example, Disney cancelling its cartoons in cinema which hurts innocent kids, first and foremost, Apple banning iphone sales and certain services – not understanding, probably, that their audience is also – and mostly – well-educated, well-earning people that protest against war, and using their devices as tools in reading non-propaganda news, coordinating rallies and what not. Companies, on the other hand, make a statement for the sake of making a statement, Russia=bad, but they do not examine what they really do or who they damage. Well, I’m not passing judgment since the feeling is entirely understandable; it’s simply sad. Sanctions have yet to hit games, but I wouldn’t be shocked if they did, and I’m afraid to see Blizzard, Steam (where I bought and kept my FFXIV account and single-player games), or other creators and distributors in the headlines. So, here we are, back where we started: I have no control over these occurrences, and in the meanwhile, I’m playing while I can, knowing that every day may be my last.

Anduin Cinematic in World of Warcraft (Spoilers Ahead)

Of course, it’s a joke, but I genuinely reinstalled WoW to diversify my gaming holdings. Technically, Blizzard would succumb to penalties sooner than Steam, which brings together creators from all around the globe, including Asia, but that may not be the case.

I logged in again, completed a 20-minute round of daily quests in Zereth Mortis, and then logged out. My first harsh opinion, tinged with IRL rage and dismay, proved correct: Zereth Mortis is an uninspired grind with no meaningful lore basis, and I only want to play the patch if there’s nothing better to do. Zereth Mortis is not as intriguing as Korthia, despite its lack of backstory and gloomy environment. However, since my subscription is already paid for, I may see the narrative missions and possibly run a raid once in LFR when it comes out.

If Arthas appeared as a human soul, he would quickly pull the blanket to himself, and fans would want more, such as a redemption storyline, questlines, or whatever. Even the bitter Sylvanas has let go of this piece, and it’s a fair, just destiny for the fallen paladin/death knight/lich king. Wow, I mean wow, wow, wow, wow, wow, That’s a discovery that does exactly what it says it would, closing up loose ends and balancing logic, emotions, and character responses. Is Blizzard still capable of lore? That’s a positive indicator.

The only question remaining is why Sylvanas goes into the raid like a friend, but that’s for the next lore questline, which will be released tomorrow. As I already said, I don’t really care what they do with the character any more, but let’s see what happens.

Lolo the lalafell is catching up with the plot (Zodiark just down, about to meet bunnies), and I’m aggressively leveling non-DPS jobs: warrior, white mage, and astrologian. Now that they’re all over 50, their spell kits are starting to take form, and I’m able to assess the tasks.

Warrior is a great tank experience. Simple, comprehensible DPS rotation (although: why AoE spells don’t fuel Inner Beast gauge, when we have an Inner beast AoE spell?), a very satisfying feeling of swaying a big ass axe (and being a lalafell adds another 100 points of satisfaction to that), and a straightforward mitigation kit. I put all def spells in line on my hotbar, in power progression, so I can easily pick the one according to situation without thinking: for example, 10% -> 20% -> 30%. By level 50, I already don’t struggle with survival as before, although I still avoid doing too big pulls – 2 packs tops.

White Mage isn’t really inspirational, and it’s sloppy for want of a better phrase. Despite having almost the same healing toolbox as astrologian, every dungeon with it is a challenge. Spells heal for a lower amount for some reason (not gear, I checked), therefore I’m having trouble keeping the tank afloat and rescuing party members who rip aggro. When the whole party takes AoE damage, you try to cast an AoE spell, but it won’t work since the party members are distributed throughout the field, and it doesn’t have the range to cover even two! I would often attack the tank, and even melee dps aren’t healed! Not to mention ranged, which does not seem to stack. So I spend a pricey AoE heal to heal just one person, and I have to supplement the others with single target spells.

Even if I’m really cautious, don’t spam costly spells until absolutely essential, and focus on minor heals as a majority of my rotation, White Mage often runs out of mana. To top it off, my concerns about the shaman feel haven’t gone away: DPS is still stones and wind, and healing spells don’t do flowers and whatnot. Overall, White Mage is playable and feasible, but it falls short of my expectations in terms of enjoyment and class fantasy.

Astrologer, on the other hand, is an incredible profession. Every new spell I learn makes perfect sense and finds a home in my rotation and spell kit. Switching to Astrologian after White Mage is a huge relief; dungeons go a lot better, my spells seem strong enough to keep me from panicking, and I managed to pull my company out of a few of difficult places – stressful, but satisfying. Not to say anything about buffs – it’s an additional layer of depth that isn’t required (for example, I don’t have time for it during trash battles), but makes you feel important and helpful during boss fights. The cast animations and class accoutrements are also really nice and entertaining. I’m really enjoying it!

Having saying that, playing a non-DPS game isn’t exactly my cup of tea. I usually play games to unwind, and being a tank or, more specifically, a healer, is far from relaxing — you have to be on your toes and ready to respond at all times, and even a split second of attention might result in a group wipe. It’s still interesting to play these roles – or classes in other games – since it gives you a better understanding of how the entire group works, why tanks and healers aren’t always there to rescue you, what to depend on, and it makes your DPS gaming a lot more responsible:) I’m not sure whether I’ll continue to play them beyond level cap, but the Trust system, which has been in place since Endwalker, would at the very least allow me to satisfy my desire to play these classes without feeling rushed:)

Endwalker has been re-played.

I’m still dragging my lalafell through the Endwalker narrative, and he has a mixed reaction. Of course, I lost some feeling of freshness, major disclosures, and other such things – but that’s also a benefit. Now I know what I’m in for, I know what to expect, and I pay attention to little nuances and crumbs in conversations that make a lot more sense now that I’ve finished the novel.

Still, several aspects that were new the first time around have lost their appeal and no longer seem as good – for example, I trudged through Garlemald with my eyes rolled, fearful of a vehicle quest at the conclusion. From abduction to uncanning Zodiark, I just admire the zone’s great start and finale today. By the way, the dreaded In From the Cold quest has been nerfed significantly, thus I only failed once this time (my mi’qote took approximately 8 tries!). The Endwalker plot isn’t any worse; it’s still the greatest in the game and beyond; it’s just that I wouldn’t redo certain tasks if I had the option.

The first two dungeons, as well as Zodiark, were surprisingly simple. We struggled a lot on my first walkthrough, and Zodiark took approximately ten tries to kill. This time, I strolled through with Trust, did not wipe once, and Zodiark — despite the fact that he was forced to do so with players – was down on the second pull with little difficulty. Even though I only killed him once, back in December, everyone survived. Isn’t it true that practice makes perfect? Anyway, I’m excited for the remaining dungeons now.

The objective remains the same: finish the narrative, complete the current expansion’s side quests, and level all of my alt professions to level cap, including healers, tanks, and all DPS — on both alts. It’s a long-term objective, and I’m fully immersed in every FFXIV activity – even re-running the Praetorium main scenario for the zillionth time – and having a blast.

If only I could be confident that gaming would continue to be a part of my life beyond IRL Final Days:) No one, even myself, can tell.