You are here: Home / Warcraft / WoW: Shadowlands Finale – Expansion Ended in a Fart 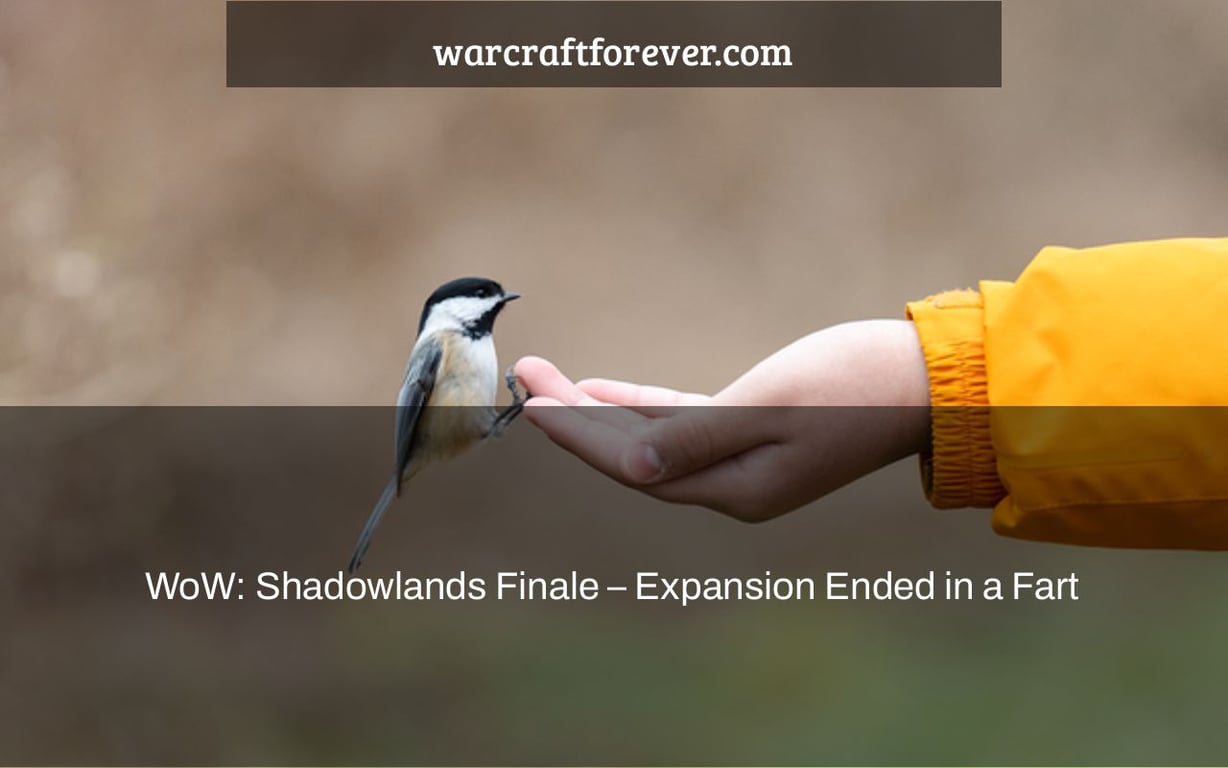 WoW: Shadowlands is a new expansion for World of Warcraft, the popular MMO. It was released on September 4th to mixed reviews and some controversy surrounding how long it took Blizzard Entertainment to release this highly anticipated content.

The “world of warcraft: shadowlands” is an expansion that ended in a fart. The final boss was a joke and the raid content was lackluster.

I anticipated nothing, I expected it to be horrible, and yet I’m still disappointed, according to the WoW media comments. Let’s speak about this nonsense they attempted to pass off as the end of the expansion.

Well, they said that we get all the answers in 9.2. – and hell, that was about time. We had absolutely zero information on why do we fight for two expansions straight, but presumably driven by Jailer’s plan. So what was the master plan according to Danuser & Co?

Please don’t laugh. According to what I figured out, his plan was to use Azeroth the Titan’s power stocks (azerite and other stuff) buried under Icecrown (of all places, never even mentioned in azerite-centered BfA – and for some reason, channeled not to Torghast, but directly to a very secret and barred Sepulcher) as a battery for recreation of reality – erhm… to combine living worlds and the worlds of the

I’m at a loss for words to describe how ridiculous this is. Sylvanas – and Jailer – spent two expansions rambling about how the cycle of life and death is unjust — flush that. Jailer had been ranting about dominance for a long time, twisting his moustache – flush that. The relationship between the jailer and the Pantheon should be flushed into the toilet. The recurring Warcraft theme of a bad person doing evil things to defeat the larger villain has been taken to its logical conclusion.

We never know what this threat is – not even a hint, not a line of dialogue; we don’t know who they are, what they want, or what the stakes are; and why did the writers need another even cosmic-er, bigger power out of nowhere; and why could only living and dead people fight this threat; and why only dominated, not by consent. We’re not sure why the living and dead worlds needed to be refurbished. We still don’t know anything about Jailer’s motivations. Comparing a child’s spacecraft drawing to an actual spaceship is like comparing a child’s spaceship drawing to an IRL spaceship. It’s not even an arc!! It’s been a bad guy doing a variety of bad things in a disjointed manner, in random short cinematics with no logic or explanation, which culminated in a completely different motive out of nowhere in the same meaningless cinematic, explained nothing, and settled with some vague warning while turning into a reverse-Pinocchio (another “brilliant” touch).

Let’s work with what we’ve got and attempt to piece together a character arc from this scrapbook.

We should have gotten an explanation (character eavesdropping in Torghast, like we did) that his goal is to create an army of living and dead, and why that is necessary, and what he tried to get them to work together but failed (Pantheon-opposed or something), and why this domination move was absolutely necessary. We should have received explanations – points of view – from Covenant leaders as to why this concept was rejected, as in he attempted to explain but was shackled.

We should have given an explanation for how he forges the key, why Anduin, not a billion people from other worlds (and why he even required Jaina, Baine, and Thrall), what the seals are, what’s up with Arbiter, and how he duped Sylvanas – assuming she was duped into performing his bidding.

In 9.2, we should have discovered – by cypher and other means – who the “greater” evil men are, what the stakes are, and why Azeroth’s power is used to drive recreation, as well as how it works and funnels into this sealed Sepulcher.

We should have seen a slew of alternative explanations crammed into available spaces during an expansion to make even this ridiculous, repeated concept work, but we got nothing in the end. Don’t even get me started on Sylvanas’ “arc.”

I’m not sure what else to say – or, more accurately, why I’m still spending my time thinking about and dissecting this “legend.” Even the Ny’alotha/Nazjatar addendum to BfA’s main war tale had more logic… and a better conclusion.

Whatever they have planned for version 10.0, if the same narrative crew is working on it, I’ve lost all hope. They’re just unable of creating something new and/or even treading in the same footsteps, rehashing old clichés.

They should continue the tale, and they should have begun with BfA, to be honest. BfA should have witnessed the last conflict between the Horde and the Alliance, which concluded in a long-lasting peace rather than a ceasefire. And then there’s the last expansion: eradicating the Azshara/Old Gods danger, healing and hatching Azeroth the Titan, and releasing her to battle the Void Lords on a cosmic scale, since it’s not our accomplishment, as a single Old God is nearly too much. We restored peace to the world and completed our mission — we rescued and hatched the Titans’ last champion, who will now face the universe’s strongest terrible guys. It’s over.

I’m not sure how I feel about 10.0. On our home planet, I anticipate a lot less grinding, more logic, and smaller leveling tales on a smaller scale, which may be beneficial. Blizzard can’t seem to get into cosmic scale, convincing villains, or major storylines right now. It’s a major question if I’ll be playing it (apart from IRL situations and such). But, given the status of Shadowlands and Zereth Mortis, which is a quagmire of boredom both everyday and lorewise, it may be time to let go. Let’s see what happens with the expansion announcement in April.