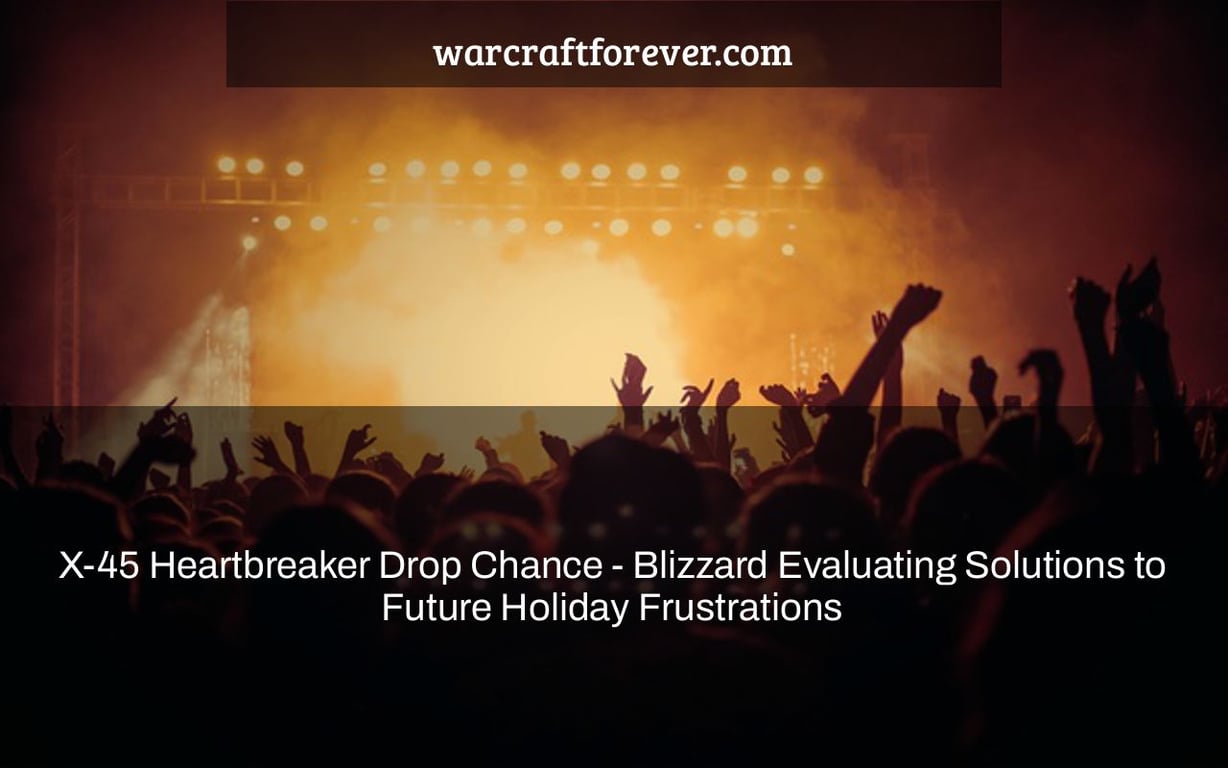 This article talks about the X-45 Heartbreaker weapon, a new holiday quest designed to make sure players always have enough of the item in stock. Blizzard has not yet found a solution that is perfect but they are doing their best.

The “big love rocket drop rate” is a problem that has been present for a while. Blizzard is evaluating solutions to future holiday frustrations.

During Love is in the Air, Blizzard has posted a blue post addressing disappointed comments regarding Crown Chemical Co.’s X-45 Heartbreaker mount. They said that they are working on alternatives, but that nothing will be done for this year’s event.

For those unaware, the X-45 Heartbreaker is the rarest mount in World of Warcraft. Heart-Shaped Box, the prize for your first triumph over the Crown Chemichal Co. special dungeon accessible during Love is in the Air, has a 0.03 percent chance of dropping. Characters that have reached the maximum level of the previous expansion or above are eligible for the Heart-Shaped Box, which means they must be level 50 or higher to get it.

Because it is only accessible when Love is in the Air, each character is limited to 15 tries each year. Because each character has a daily lockout, the only way to improve your chances is to have additional characters of the appropriate level and run the dungeon with them every day.

This isn’t enjoyable at all. I’ve done the event on my characters a dozen times a day in prior years and would probably do it again this year if I didn’t have other real-life obligations.

Right now, the best way to increase your chances of receiving the mount is to repeat the event on as many characters as possible every day. That’s mathematically right, but it’s not a really enjoyable experience.

We’ve heard your dissatisfaction, and the good news is that we’re talking about it in the office and investigating potential solutions for holiday events in general. The bad news is that even if we do make improvements, they won’t be ready in time for this year’s Love Is In the Air holiday celebration.

To put the numbers in context, there are three other mounts in the similar situation, all of which are an uncommon drop from holiday events. The other three are Coren Direbrew’s Great Brewfest Kodo and Swift Brewfest Ram from Brewfest, and the Headless Horseman’s Reins from Hallow’s End.

We gather drop statistics from Wowhead Client users, therefore we have historical information on the droprate of these mounts:

While I don’t have a good analytical metric, only anecdotal experiences from observing community reactions to the events, experience shows that Brewfest drop rates are fairly decent, with most players who set out to get it obtaining it either on their first year with some alts, or on their second year with some alts.

Players who have attempted 1000s of times without seeing the mount for The Horseman’s Reins are being forced to repeat the event dungeon every year for many years in order to get the mount, or to level alts particularly to boost their chances. It’s worth noting that you can receive duplicates of all Holiday mounts, ensuring that the droprates aren’t distorted by people who can’t loot them again.

We now have X-45 Heartbreaker, which has the same limits as the previous three mounts, with only 15 chances per year per character. Yesterday marked the halfway point of Love is in the Air, during which time Wowhead Client users conquered the Crown Chemical Co. dungeon event 24234 times, however just 12 of those tries yielded an X-45 Heartbreaker. A rate of 0.04951 percent, or close to 0.05 percent, is greater than the historical rate of 0.03 percent. This is most likely due to a lack of sufficient tries being logged to arrive at the real figure.

Blizzard said in its blog post that they were “discussing this problem amongst the team and researching potential solutions for holiday events in general,” which is fantastic news, given this issue has been ignored for 14 editions of Love is in the Air since the dungeon was created in 2009. The discussion point is required; otherwise, Blizzard may over-nerf it, as they did with the Illidari Doomhawk droprate from Doomwalker last year.

It will be my view from here on out, as someone who has farmed and earned every other drop rate mount in the game and is presently farming X-45 Heartbreaker.

Simply said, the droprate should be raised as a result of this. Its scarcity is the fundamental cause behind this. Currently, each character has 15 tries every year to get this mount. Most other low-droprate mounts, on the other hand, only let you 52 tries per year due to weekly lockouts.

This brings up another problem with having such a low droprate mount during a global event: your tries are not only restricted per year, but also only for a short period of time. If you are unable to play on a holiday day for whatever reason, you will forfeit that try, unlike most other low droprate mounts offer a weekly window from which you may choose any day to complete your efforts.

Overall, the X-45 Heartbreaker is one of the most irritating objectives in the game due to its absurdly low droprate and membership in the group of mounts with the fewest tries. Something that, regardless of how much work and planning you put in, leaves you feeling as though it had no effect at all.

The simplest short-term solution would be to align it with other Holiday mount droprates, such as 0.5 percent like The Horseman’s Reins. This would keep the mount as a goal to strive for rather than a one-time achievement. Personally, I don’t mind drop chance mounts, toys, or pets from Holiday events as long as they keep returning material year after year and don’t have horrible droprates, like practically every other droprate collectable from the holidays has.

The “X-45 Heartbreaker Drop Chance” is a problem that Blizzard has been trying to resolve. In order to avoid future frustrations, they are evaluating solutions to the issue. Reference: wow lovely charm bracelet 2021.