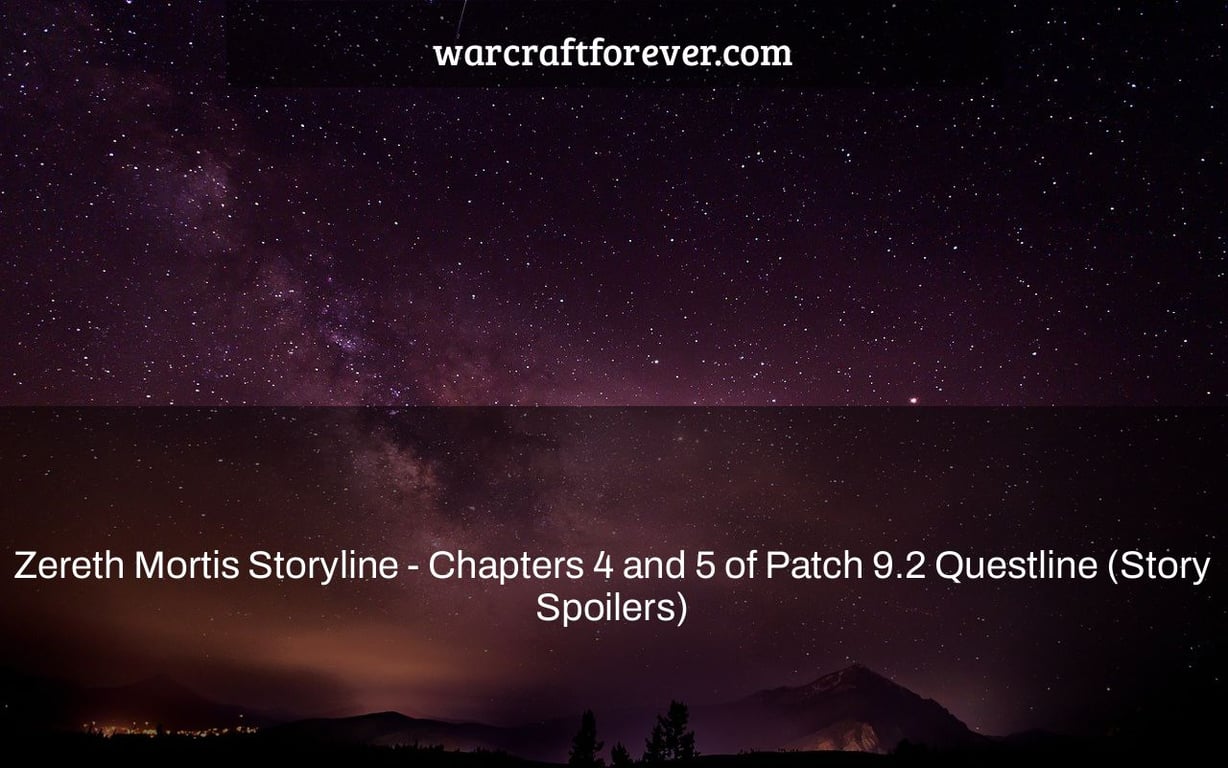 This blog post will discuss two chapters of the Zereth Mortis storyline in World of Warcraft’s Patch 9.2, which includes spoilers for both quests and story elements. This is not a guide or walkthrough, but rather an introduction to this particular questline that I have enjoyed immensely. 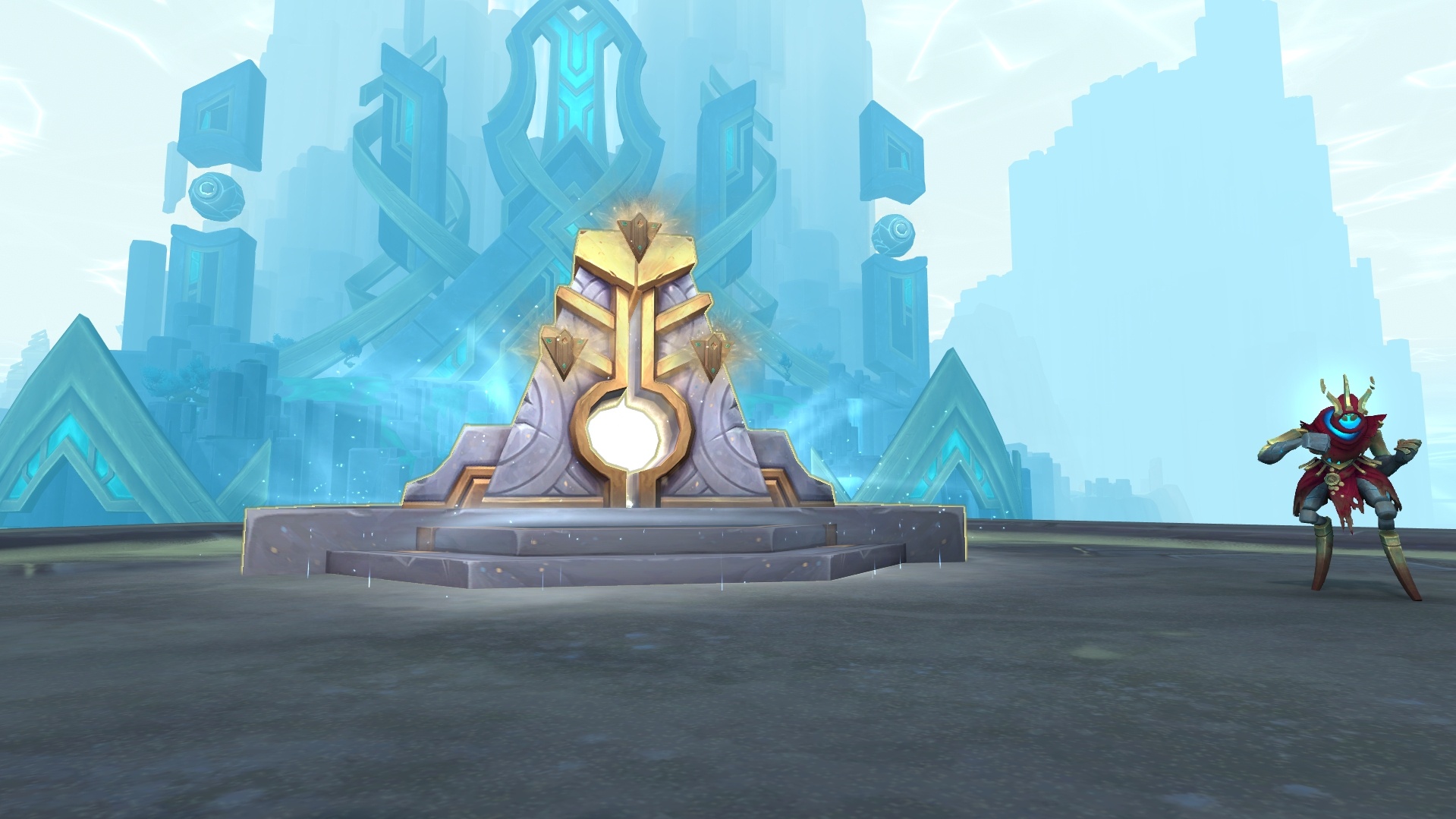 On the current PTR release of Patch 9.2, Eternity’s End, the fourth and fifth chapters are ready for testing. In this article, we looked through both of the accessible chapters.

The task News from Oribos begins in Chapter 4, and you must speak with Uther in Haven to complete it. When you talk to Uther, you’ll be sent to the Shattered Legacies cinematic, in which Uther tries to connect with Sylvanas over their common destinies and ends up with Sylvanas waking up.

We next report to Bolvar, who does not place a high premium on Sylvanas’ destiny and instead assigns you the task of speaking with the Enlightened elders in Enlisting the Enlightened. The Enlightened elders first refuse to assist us because they feel we’re asking for a favor that we won’t be able to repay, but Elder Ara believes in flexibility and sends us to Provis Esper in Forging Unity from Diversity. The Jailer was last seen in Provis Esper, where he acquired entrance to the Sepulcher of the First Ones. In Reclaiming Provis Esper and Fragments of the First Ones, Elder Ara wants us to clean up the land since Provis Esper is infested by devourers.

In The Pilgrim’s Journey, Elder Ara then sends you to Pilgrim’s Grace. The pieces you looted during the last mission begin to respond to something in the Pilgrim’s Grace region, which you can confirm in Glow and Behold. The fragments are drawn to an Ancient Translocator that appears to lead to the Sepulcher of the First Ones, but when you try to use it, the fragments stop working and fall off, so we try to talk to the people of Pilgrim’s Grace to figure out how to help them in Where There’s a Pilgrim, There’s a Way.

After speaking with a few pilgrims, you’ll discover that the Creation Catalyst is responsible for the critical shards, and in In the Weeds, we begin on the hunt for the culprit. We aid pilgrims in Pluck from the Vines, gather electrified roots in Root of the Problem, then destroy an overgrown automa in Nip It in the Bud after we’ve found the Catalyst’s basement location.

We meet up with General Draven and Nadjia the Mistblade after we return from the basement area. Following that, you’ll be entrusted with looking after the Catalyst Gardens, destroying overgrown automa in Herbal Remedies, collecting essences in Unchecked Growth, and discharging consoles that power the Creation Catalyst in Take Charge.

A brief cinematic will play when you finish these missions, in which Draven and Nadjia try to assault the gardens but are stopped by the overgrown automa in the region. In Catalyst Crush, you may either fight fire with fire or utilize a First One creation against the automa in the region. In Key Crafting, we eventually reach the Creation Catalyst and utilize its abilities to reforge the key to the old translocator. In The Pilgrimage Ends, we return to the translocator, where Bolvar, Uther, Sylvanas, and Jaina await us. This quest concludes in Chapter 4 with a chat between Sylvanas and the Jailer concerning the Jailer’s abilities.

Sylvanas: If the Jailer has broken into the Sepulcher, he is on the verge of carrying out his plot. Bolvar: That’s not going to happen. —- Uther: Pass on what you’ve told me to the others. Sylvanas: You’ve all seen the Jailer’s might up up and personal. We have no hope against him unless we have the tools to reject his dominance. Anduin might be the key, Sylvanas. If we can rescue him from— Jaina: After all you’ve done, you dare to talk about liberating him? Uther: Sylvanas was enslaved by the mourneblade. Her presence may be able to aid Anduin escape the Jailer’s clutches. Jaina: I’ll never put my faith in her. Uther: Then put your faith in me. Uther: Always, Jaina. Jaina: All right. Together, we’ll prepare to infiltrate the Sepulcher and rescue Anduin.

The Broken Crown is the first task in Chapter 5, and it requires you to speak with Anduin in the Geometric Cave in Haven. After Anduin is rescued from the Sepulcher of the First Ones, this mission takes place. A sequence is meant to occur here, however it isn’t accessible on the PTR right now. The Primus’ plot is then revealed on Our Last Option. The Primus devised Domination magic and thinks that the Helm of Domination may be used to fight it.

In Hello, Darkness, we start testing how the broken Helm of Domination functions, and Darion offers to be the test subject, stating he can endure the torture. Darion, on the other hand, falls subject to its magic almost instantly, indicating that even the shattered helm has enough strength to mind control someone, and that someone who has previously fought Domination magic might still fall prey to it.

In Testing One Two, we put the Helm to the test on additional Zereth Mortis monsters, and in Elder Eru, we meet up with one of the Enlightened elders. We can get the Primus to explain how Domination magic works to us before we go. Cervids get mind-controlled instantaneously, Poultrids burst, and out-of-date Automa struggle for a few seconds before succumbing to mind control.

The Primus: Domination is analogous to communication, or maybe a language. The Primus is a strong being who interferes with a creature’s ability to comprehend itself. It’s for this reason that it’s almost difficult to resist. The Primus: If we can keep that interference going for long enough, we may be able to stop it.

When we locate Elder Eru, he explains that automa’s ability to resist Domination magic for a period of time is due to the complicated language they understand. Fortunately, Elder Eru’s current location doubles as a library, and we begin studying cyphers in Cryptic Catalogue.

In The Not-Scientific Method, we begin learning the Cypher alphabet in the library by uploading the sentences we’ve gathered to a nearby librarian and attempting to conquer it with the helm. The helm ultimately takes possession of the librarian’s mind, but it takes several seconds this time, demonstrating that the more complex the language a creature learns, the more resistant it is to Domination magic. In Two Paths to Tread, we return to the Primus with this understanding.

With the equation figured out, we go to the Endless Sands in One Half of the Equation, where the First Ones’ language was created. Taelia and Bolvar join us there, and we begin exploring the region by slaying Mawsworn in Oppress and Destroy and searching Aggressive Excavation for additional cypher words. Bolvar and Taelia get closer as we go across the Endless Sands.

Taelia: I’ve got one for you. Isn’t this sentence completely incomprehensible? It makes my head spin just looking at it. Bolvar: The attribute that makes Domination less effective is the emotion in your thoughts. —- Bolvar: Can you tell me who taught you how to use a hammer? Sir Crestfall of Kul Tiras, Taelia. Growing up, he was always there for me. In the flesh, someone I could look up to. —- Taelia: Did you ever think about mother and me when you were alone in Icecrown? Bolvar: On a daily basis.

It is tie memories inside the Helm of Domination with the sentences learnt. In Where the Memory Resides, we visit the Chamber of Reflection in Bastion and utilize it to enhance the shards of the Helm of Domination in What We Wish to Forget. Bolvar and Darion, who had previously been subjugated by the Helm, volunteer to serve as sacrifices.

Anduin is the next to volunteer in What Makes Us Strong, but due to his recent release from Domination control, he is unable to gather his will. We witness the Sylvanas Remembers Arthas sequence as Sylvanas submits her will to the Helm instead. After that, in What We Overcome, Anduin tries to give his will once again, and this time succeeds.

The Primus: It’s time to fix what’s gone wrong. Thrall: What makes you think this new helm won’t be used to enslave others? The Primus: It’s to grow into something bigger. A tool for exercising one’s free will. Sylvanas: There will never be another Lich King in Icecrown. —- Bolvar: Our wills are our own now that we’ve reforged. Taelia: For the foreseeable future. Baine: I’m going to the Shadowlands. Jaina: For the sake of Azeroth. The Primus: Zovaal is coming to an end.

Chapter 5 comes to a close with the accomplishment of this task.